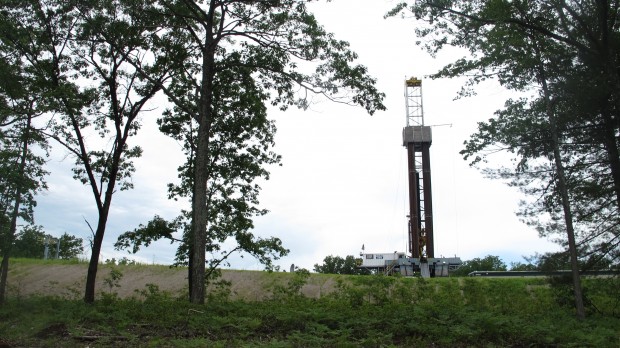 For the second time in less than a month, a House committee has voted to block tougher regulations aimed at Pennsylvania’s oil and gas industry. It’s the latest move in the ongoing battle over the rules between the Republican-led legislature and Governor Tom Wolf’s Democratic administration.
The state Department of Environmental Protection has been working to modernize the regulations for five years. Last month, a state commission gave its approval. On Tuesday the House Environmental Resources and Energy Committee voted to disapprove of the regulations.
Rep. John Maher (R- Allegheny) chairs the committee, and says he has had trouble getting the Wolf administration to listen to his concerns, which include everything from correcting typos in the text of the regulations to questions about the legality of DEP’s procedure.
“Secretary Quigley seems as unprepared to entertain any constructive conversations as he has been since the day he was appointed,” says Maher.
Two years ago lawmakers used a budget-related bill to require separate regulations for conventional industry, which drill shallower wells, and the deeper wells of the Marcellus Shale industry. Now, critics say the DEP is ignoring that law. They also say the department relied on sections of the state’s oil and gas law that were struck down by the state Supreme Court to justify expanding protections of public resources, such as schools.
“The new oil and gas regulations are important to protecting the health of our environment and residents,” says Wolf spokesman Jeff Sheridan in an email. “The governor is committed to working with the legislature to further his administration’s goal of improving the protection of water and public resources, public health and safety.”
It’s likely this disapproval resolution will go before the full House and Senate for a vote. If it lands on Wolf’s desk, he’s expected to veto it and the legislature would have to override the veto in order to stop the new rules from taking effect.
Supporters argue the regulations have been in the works for years and are the result of the state’s updated oil and gas law (known as Act 13) which passed with bipartisan support in the legislature and was signed by Republican Governor Tom Corbett four years ago.
“I hope it doesn’t take another Upton Sinclair, or Flint, Michigan exposé, while we diddle here in the legislature and stall,” says Rep. Steve McCarter (D- Montgomery). “It’s time to move forward on this issue.”
Note: this story has been updated with reaction from the Governor’s office.