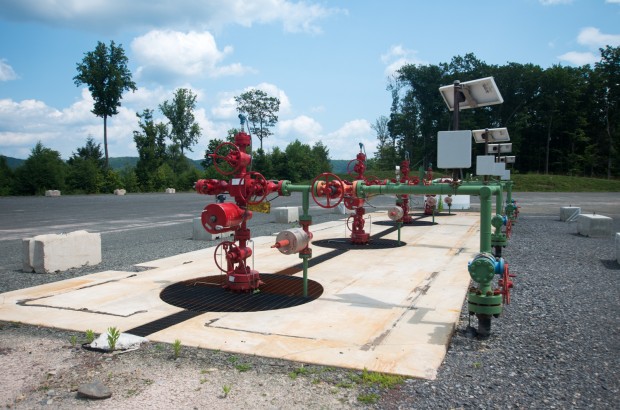 The year 2016 is already shaping up to be a bad one for Pennsylvania’s gas industry, and it’s going to hurt state and local governments too. Impact fees paid by drillers are projected to bring in the lowest amount ever — $185.5 million — according to a new analysis by the state’s Independent Fiscal Office. It’s a 17 percent drop compared to the previous year.
The decline is driven by two factors: depressed gas prices and fewer new wells being drilled.
“The data from DEP suggests there was a 42.9 percent drop-off in new wells drilled,” says IFO director Matthew Knittel.
The shift means the overall effective tax rate for Marcellus Shale gas wells will now be higher. It jumps to 5.5 percent in 2015, compared to 2.1 percent in 2014, according to the report.
The impact fees have become an important source of revenue for local governments because 60 percent of the money stays in the regions where drilling occurs. The rest goes to various state agencies involved in regulating the industry and to the Marcellus Legacy Fund– which gets spread out around the state.
Ed Bustin (D) is a commissioner for Bradford County, which received $6.4 million in impact fees last year, which was the second highest amount in the state, after Washington County.
“The decrease isn’t unexpected,” he says. “It’s been noticeable. We’ve had significantly less new drills in the county.”
He’s more concerned with efforts in Harrisburg to place a severance tax on natural gas production, which he fears could end up siphoning revenue away from local governments.
“With the new budget, what’s going to happen? Will it go to all severance tax or a partial impact fee? I think that will have a bigger impact on us,” says Bustin. “Who knows at this point?”
The final revenue amounts will be released in April by the state Public Utility Commission, but Knittel says based on past experience, the IFO projections are pretty close.
“We have found, based on the DEP reports, we can compute those amounts within a few million dollars,” he says.