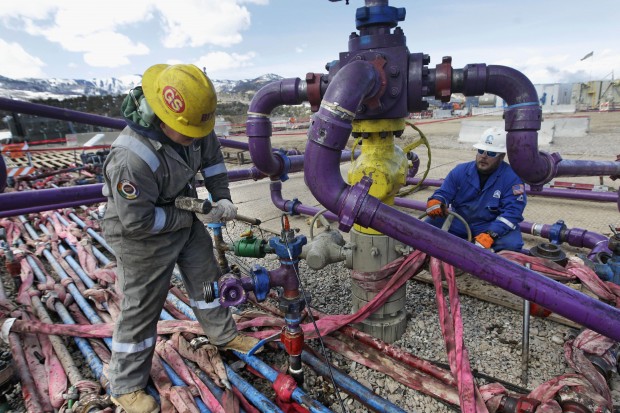 Workers tend to a well head during a hydraulic fracturing operation outside Rifle, in western Colorado.

A scientific panel that is evaluating the U.S. Environmental Protection Agency’s landmark report on hydraulic fracturing and drinking water issued a second draft of its study on Tuesday, making many changes to language and tone but continuing its earlier criticism of the report’s finding that it found no evidence of a widespread impact on drinking water.
The Hydraulic Fracturing Research Advisory Panel, a unit of the EPA’s Science Advisory Board (SAB), released the new draft as part of a process that will include two more public teleconferences, more revisions, and eventually a submission to the full SAB, perhaps by May.
The draft restated the panel’s earlier concerns, published in January, about the EPA’s headline conclusion on impacts to drinking water from fracking for oil and gas but deleted language saying the report didn’t reflect uncertainties and data limitations in reaching that conclusion.

Instead, it noted that the EPA’s conclusion had been interpreted by the public “in many different ways” and now requires “clarification and additional explanation.” The new draft repeated the earlier criticism that the conclusion of no widespread, systemic impact was “of particular concern” because it did not clearly describe the water systems and did not define “widespread” or “systemic.”
It left largely intact its earlier criticism saying the EPA’s executive summary was inconsistent with the body of the report.
“The SAB is concerned that these major findings as presented ambiguously within the Executive Summary are ambiguous and appear inconsistent with the observations, data, and levels of uncertainty presented and discussed in the body of the draft Assessment Report,” the new draft said.
It added language urging the EPA to recognize that the hydraulic fracturing industry is “rapidly evolving” and noting that the long-awaited report, issued in June 2015, drew its conclusions based on data available at the time.
The new draft, running to 138 pages, restated the panel’s concern about the EPA’s failure to conduct baseline testing during its investigation but added language calling on the agency to explain why that had not happened.
“The SAB is concerned that the EPA had planned to but did not conduct various assessment, field studies, and other research, and the SAB recommends that the EPA delineate these planned activities within the draft Assessment Report and discuss why they were not conducted,” the draft said.
It left largely intact its language saying the EPA report needed to do a better job of recognizing the severity of local impacts in places like Dimock, PA.
Dr. David Dzombak, a Carnegie Mellon University engineering professor who chairs the panel, declined to highlight any of the changes in the draft, saying it would be unfair for one member of the panel to do so.
“There are many changes that have been made and the panel will be discussing all those changes, and it would be inappropriate for me to pick out a couple of things that I think are particularly important,” he told StateImpact.
“It’s a document in development, and it’s not finalized and until it is, everything in there is in flux,” he said.
He said the new draft has been issued now “so the public can see what we’re doing.”
Dzombak said the next public discussions on the document will be during teleconferences on March 3 and 10.