Gov. Stitt proposes budget in State of the State Address 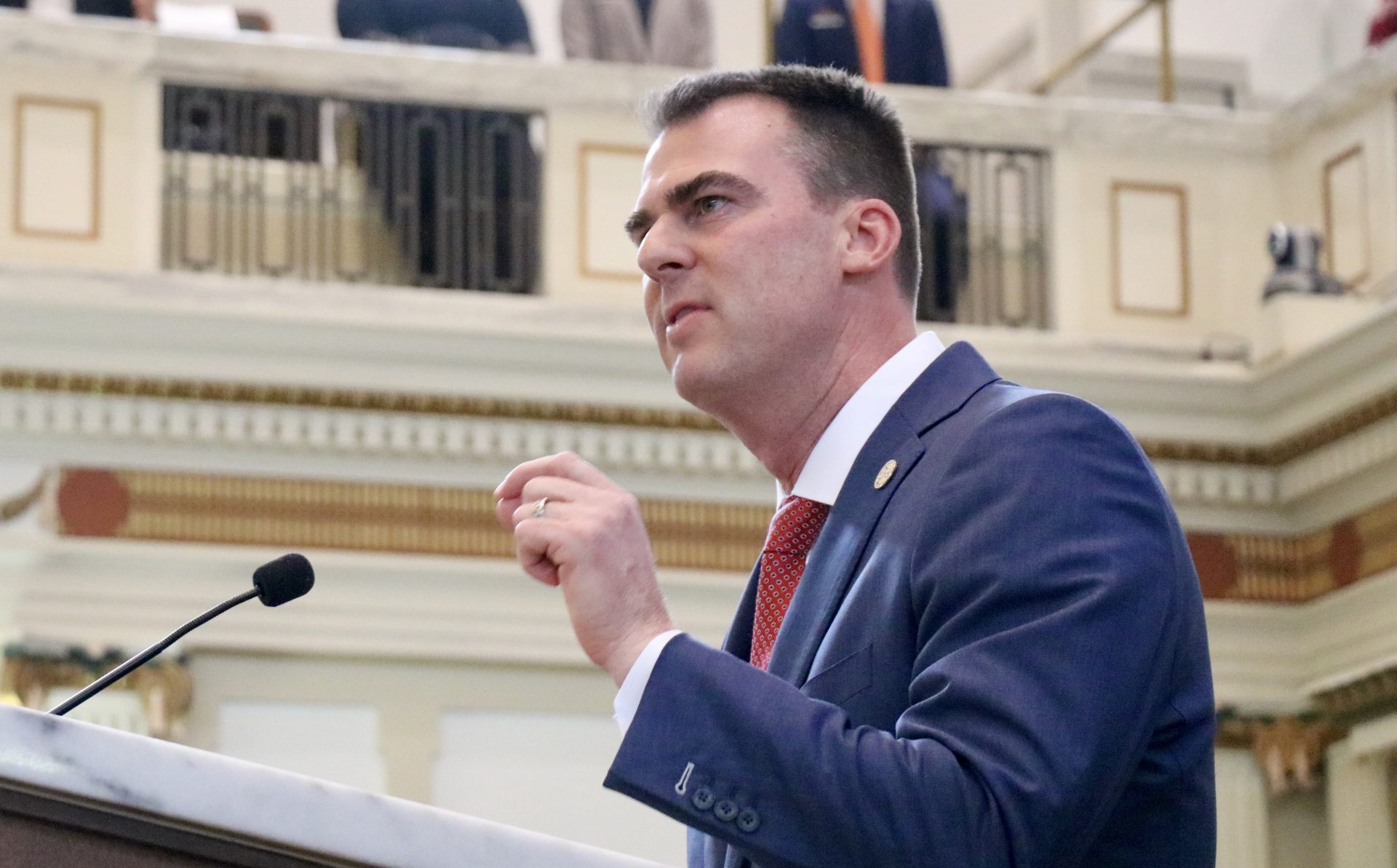 Governor Kevin Stitt gave his second State of the State Address today before a joint session of the State House and Senate for the 58th Oklahoma Legislature.

In advance of the address, Gov. Stitt’s Budget Secretary Mike Mazzei presented his proposed budget to reporters. Because of a downturn in state revenue collections in the last year, spending remains flat.

The proposed budget calls for keeping how Oklahoma spends its money stable, with big decisions to be made later. Stitt’s budget proposes lawmakers have about $163 million to look at spending across an array of state agencies. The state’s overall budget is $8.3 billion.

“We must take a holistic approach and be united around a vision in order to move the state forward,” the narrative of Stitt’s proposal said.

While the budget leaves room for the inevitable negotiation with lawmakers, it does outline his priorities for the 2020 legislative session.

The first issue mentioned in the governor’s executive budget is education.

While the governor doesn’t propose new state spending for education, he asks for lawmakers to allow voters to ‘unlock more local dollars’ through unspecified reforms.

Other education agenda items include:

Because the Governor is aiming for a fiscally conservative position in preparation for a potential economic downturn, he proposes flat budgets for several departments involved in criminal justice reform efforts including The Department of Corrections, Department of Public Safety, Department of Mental Health and Juvenile Affairs.

The Department of Mental Health proposed a budget increase to divert people away from prison, and the Department of Corrections asked for an increase to add prison beds and prevent contraband, such as the cell phones that were believed to have led to statewide prison riots last fall.

Last week, Stitt announced a plan to expand Medicaid in Oklahoma through a federal block grant. Medicaid is the state-federal insurance plan for low-income people. So far, 36 other states have expanded the healthcare program.

Calling it Soonercare 2.0, Stitt believes the grant will reduce the number of uninsured people in the state while maintaining accountability. As part of this program, the governor will seek “moderate premiums” and work requirements for able-bodied adults. If approved by lawmakers, the state would get a lump sum of money from the federal government to manage. Republicans, including Stitt, say the block grant is a way to manage increasing Medicaid expenses. This plan may be popular among lawmakers who have historically worried that expanding Medicaid in Oklahoma may leave the state with a hefty price tag if the federal government were to reduce funding.

In his address, the Governor openly campaigned against the Medicaid expansion initiative that will be on an upcoming ballot after getting enough signatures from voters.

“Any other effort to enact a clean expansion of Medicaid, to include putting it in the State’s Constitution, will create significant restrictions.” he said. “With straight Medicaid Expansion, Oklahoma will be left with the same ineffective and unaccountable program that has failed to bring us out of the Bottom Ten rankings.”

Stitt also called for consolidation of the agencies delivering Medicaid services into a single agency. His analysis shows 10 state agencies facilitate the spending of Medicaid dollars in the state.

He also wants to audit the state’s Medicaid system to ensure people who should be receiving benefits are receiving them and people who are defrauding the system are removed. The Oklahoma Attorney General’s Medicaid Fraud Unit reports it recovered $91 million in the last five years. Annual spending on Medicaid in Oklahoma is $4.7 billion.

Other healthcare agenda items include:

Tribes and the Governor have been in dispute for more than six months over the state’s gaming compacts with the tribes. The fees the state gets from gaming operations as part of the compacts account for 1.3 percent of common education funding.

The governor reiterated his position that the compacts with the tribes expired at the end of the year and criticized the decision of some tribes to sue the state on Dec. 31, 2019.

In his address, Stitt told lawmakers that while the state awaits a decision from the federal court about the compacts, he wants the legislature to send him a bill allowing money from the Revenue Stabilization Fund to be used to shore up any loss from gaming fees.

“The Tribes will continue to remit revenue-shares due and owing under our renewed compacts,” said Matthew L. Morgan, chairman. “It is unfortunate to see Gov. Stitt tie himself and the State in knots as he continues his refusal to acknowledge the plain terms of the agreement the state offered the tribe 15 years ago. We stand with Oklahoma teachers and are proud of our contribution to Oklahoma common education.”

As part of Stitt’s mission to make Oklahoma what he calls a “Top Ten State,” the governor wants to prioritize growing the economy by increasing the state’s Quick Action Closing Fund by $3 million. This is a fund that can be used at the governor’s discretion to incentivize a company to relocate or create jobs in Oklahoma.

Stitt also announced he is filing an executive order to review Oklahoma’s Administrative Code with the intent of reducing “red tape” by 25 percent over three years with the intent to attract more jobs.

Occupational licensing was another priority Stitt promoted as part of his economic development agenda. He credited lawmakers for reducing licensing barriers for veterans and people with felonies through legislation passed in 2019 but called on them to pass universal licensing in 2020.

Additional recommendations in the budget include:

Other noteworthy items in the governor’s budget document include a request to audit the Department of Oklahoma Management and Enterprise Services. In his ongoing legal dispute with the tribes over the gaming compacts, the governor says he wants to review documents and audits for more than 100 casinos in the state.

Because of deferred maintenance over a period of years, the state has what the governor calls “an enormous backlog of capital needs”. The Long-Range Capital Planning Commission estimates total repair costs over an eight-year period to be $311,400,000. However, the state doesn’t have sufficient bond capacity for important priorities because of its current debt service.

Stitt believes the greatest challenge facing the state is government bureaucracy. He believes the government is “too big and too broken.” He points to the fact that of the $20 billion the state spends annually, only 40% is appropriated by the legislature. He believes turning more oversight over to his office is part of the answer.