John High doesn’t have a windowless room in the house that he rents in Norman, Oklahoma. Since he can’t afford a wheelchair accessible storm shelter, he has nowhere safe to go during Oklahoma’s frequent tornadoes.

In the state with the highest number of disaster declarations, many Oklahomans with disabilities don’t have a storm shelter 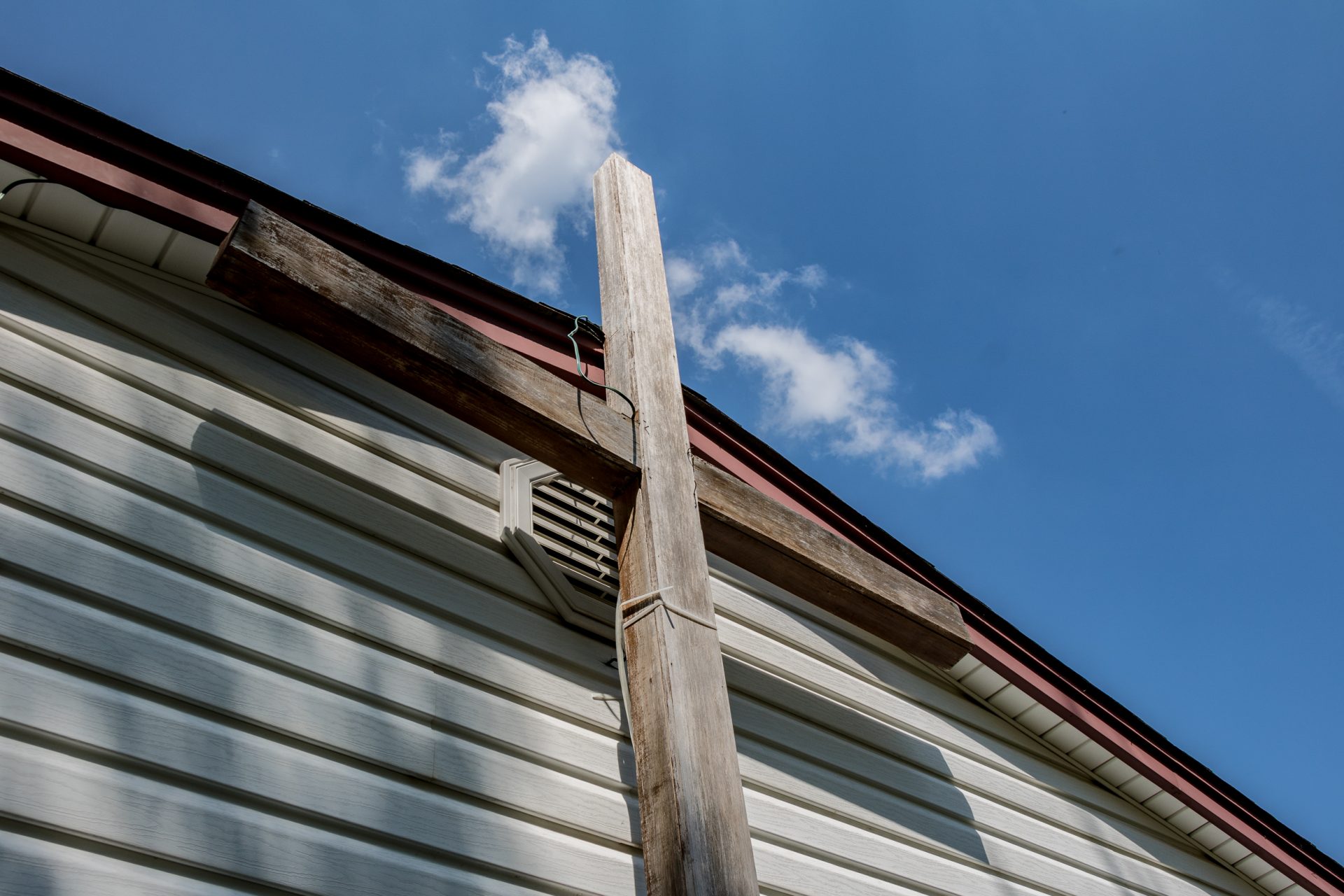 John High relies on his Christian faith to get him through Oklahoma’s severe weather. He installed this 14-foot high cross in front of his rental house.

John High knows that when he hears a tornado siren, he’s on his own.

“I just pray. That’s all I can do,” High says while sitting in his motorized wheelchair at his home in Norman, Okla.

That’s because he doesn’t have a safe place to go.

“One person told me ‘put on a football helmet and go in your kitchen.’ I got a window in every room of this house, so there’s really no place for me to go. That’s why I’m trying to get a shelter,” he said.

High chose the house he has rented for more than a decade because of its proximity to a public school that was a designated public shelter. From his driveway, High can see the school just down the street. But most public shelters, including that one, were shut down a few years ago, leaving Oklahomans like High to fend for themselves.

“I lost my leg last Thanksgiving,” High said. “They expect people to ‘shelter in place’ but I don’t have anywhere safe to go.”

The gold standard for people who live in tornado-prone areas is a storm shelter. They range in price from a few thousand to tens of thousands of dollars, depending on the size and materials. The base model is basically a concrete box set into the ground, usually in a backyard. But it requires people to go down a set of steep stairs that is not wheelchair accessible.

High receives assistance from both Medicaid and Medicare and says he simply can’t afford to pay for his own shelter.

After the closure of the public shelters, High thinks the federal or state government should help people with disabilities get their own storm shelters.

“We’re [in] tornado alley. We’re known for it. Why aren’t they helping to protect us?” He said. “Instead it’s ‘well, just duck your head and go in your house.’”

Disasters are becoming more common in America. In the early and mid-20th century, fewer than 20 percent of U.S. counties experienced a disaster each year. Today, it’s about 50 percent. According to the 2018 National Climate Assessment, climate change is already driving more severe droughts, floods and wildfires in the U.S. And those disasters are expensive. The federal government spends billions of dollars annually helping communities rebuild and prevent future damage.

Data collected and analyzed by the Center for Public Integrity found that between 2009 and 2018, Oklahoma had the highest number of major disaster declarations in the country. That includes severe storms, fires, floods, ice storms and tornadoes. Many of those hazards, including storms, are expected to become worse and more frequent due to climate change.

“If you’re able to install a safe room in your home, or on your property, we recommend that you do that, it’s the safest place that you can be during a storm,” said Keli Cain, a spokeswoman for the Oklahoma Department of Emergency Management.

Despite experiencing some of the most severe weather events in the nation, Oklahoma has no state laws requiring storm shelters in homes, apartments or businesses. Instead, storm shelters are marketed as an amenity in some new housing developments. 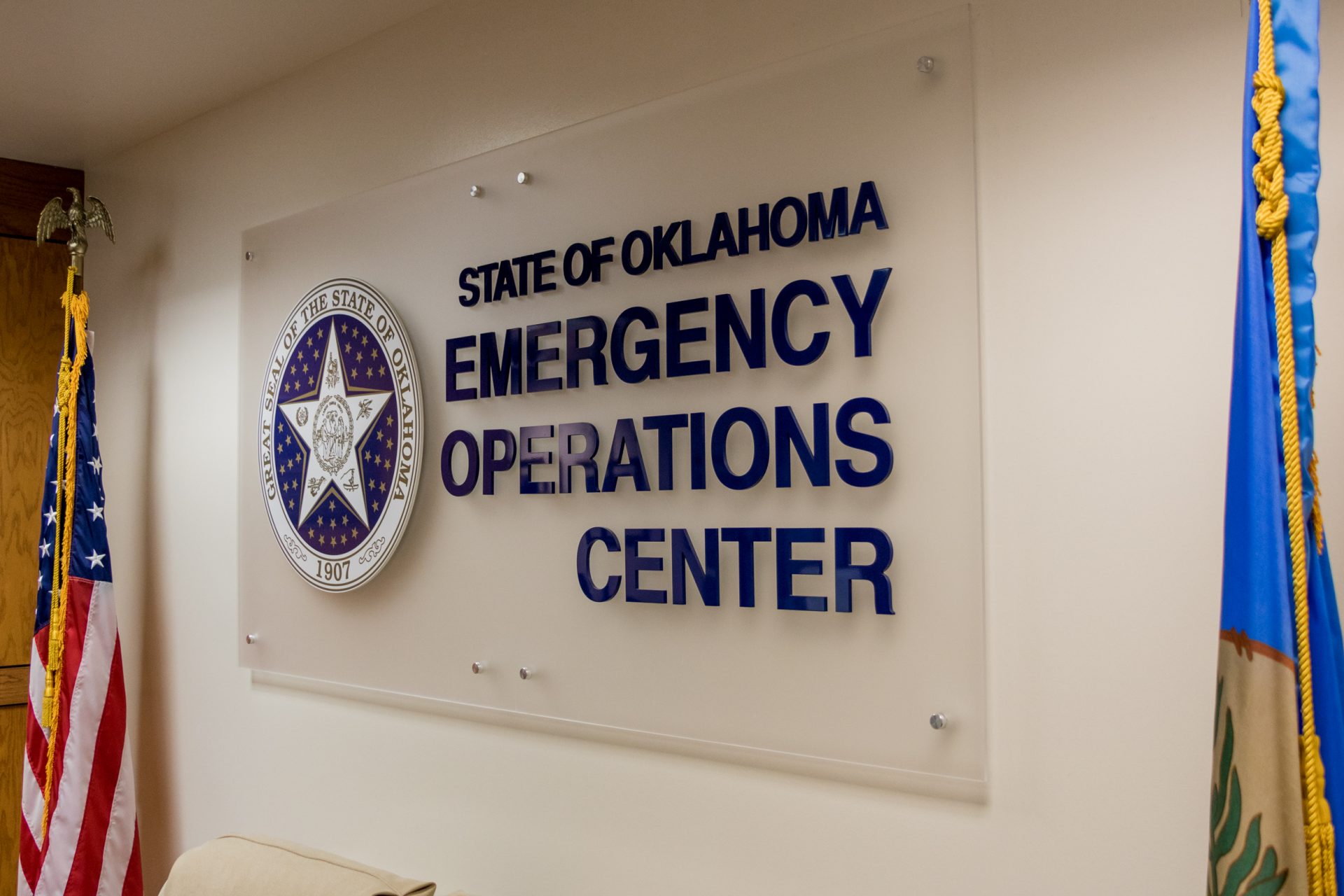 The Oklahoma Office of Emergency Management does not track which homes have storm shelters, and officials say there is no program to help people with disabilities get access to shelters.

“Community shelters are funded on their own, either through bond issues or other funding methods, we don’t have a listing of the community shelters, they don’t have to register it through the state or anything, unless it’s funded by a [federal] grant program,” Cain said.

Oklahoma has one statewide storm shelter rebate program, funded by the Federal Emergency Management Agency. Cain says the grant provides about 50 households a year with up to $2,000 to help cover the cost. But it’s a random lottery system that doesn’t take socioeconomic status into account – and it’s restricted to homeowners. Renters, like John High, can’t even apply.

FEMA does restrict much of its disaster funding to homeowners, which has spurred litigation. Cain also said that for a person with a disability, there isn’t any help.

“There is no specific program to help people with disabilities get a storm shelter,” Cain said. “Some people might have to leave their homes a couple of hours before the storm and go to a place that is safe.”

In July 1990 President George H.W. Bush signed the Americans with Disabilities Act into law. The ADA attempted to break down the barriers preventing millions of people from living healthy, productive lives by requiring basic steps to be taken to accommodate a range of health challenges, including impairments of sight, sound, and mobility.

“Fifteen percent of the population is over the age of 65,” said Marcie Roth, CEO of the World Institute on Disability. “Within the next 40 years, this will grow to one in four people in the United States. In an emergency, you can count on the fact that people with disabilities will be affected.”

The ADA has been modified over the years to include emergency preparedness, but the focus was renewed after severe weather events like Superstorm Sandy and Hurricane Harvey.

More recently, states were sent guidance on how to comply with the ADA by federal agencies, including the Department of Justice, but the implementation of those directives has been haphazard, and Roth says emergency preparedness has fallen by the wayside. She says it can be seen in the devastation caused by Hurricane Maria, a deadly Category 4 hurricane that ravaged Puerto Rico, the Virgin Islands and Dominica in 2017.

“Interruption of medical care and disability services was the primary cause of almost 3,000 deaths following Hurricane Maria,” Roth said. “Emergency planning needs to be inclusive of the whole community and it needs to be equally accessible to everyone in the community.”

Sara Pratt is a former official at the Department of Housing and Urban Development specializing in housing and disability rights and helped write the guidance sent to states. Now a civil rights lawyer in Washington D.C., Pratt thinks that Oklahoma may be violating the ADA.

“The idea that we don’t have to serve people with disabilities who are renters is not consistent with federal law,” Pratt said.

Pratt says federal civil rights laws, including the Fair Housing Act and the ADA, require accommodations for people with disabilities in all disaster programs, including mitigation.

“The programs that are being offered to assist people who are sheltering in their homes should be available to both homeowners and renters if they have disabilities and have disability-related needs,” she said. “There has to be an opportunity for a person with a disability to shelter.”

More than 630,000 people in Oklahoma have a disability, but the state doesn’t know how many of them need storm shelters. Some local governments keep track of how many households already have one, but there is no shelter reporting requirement. 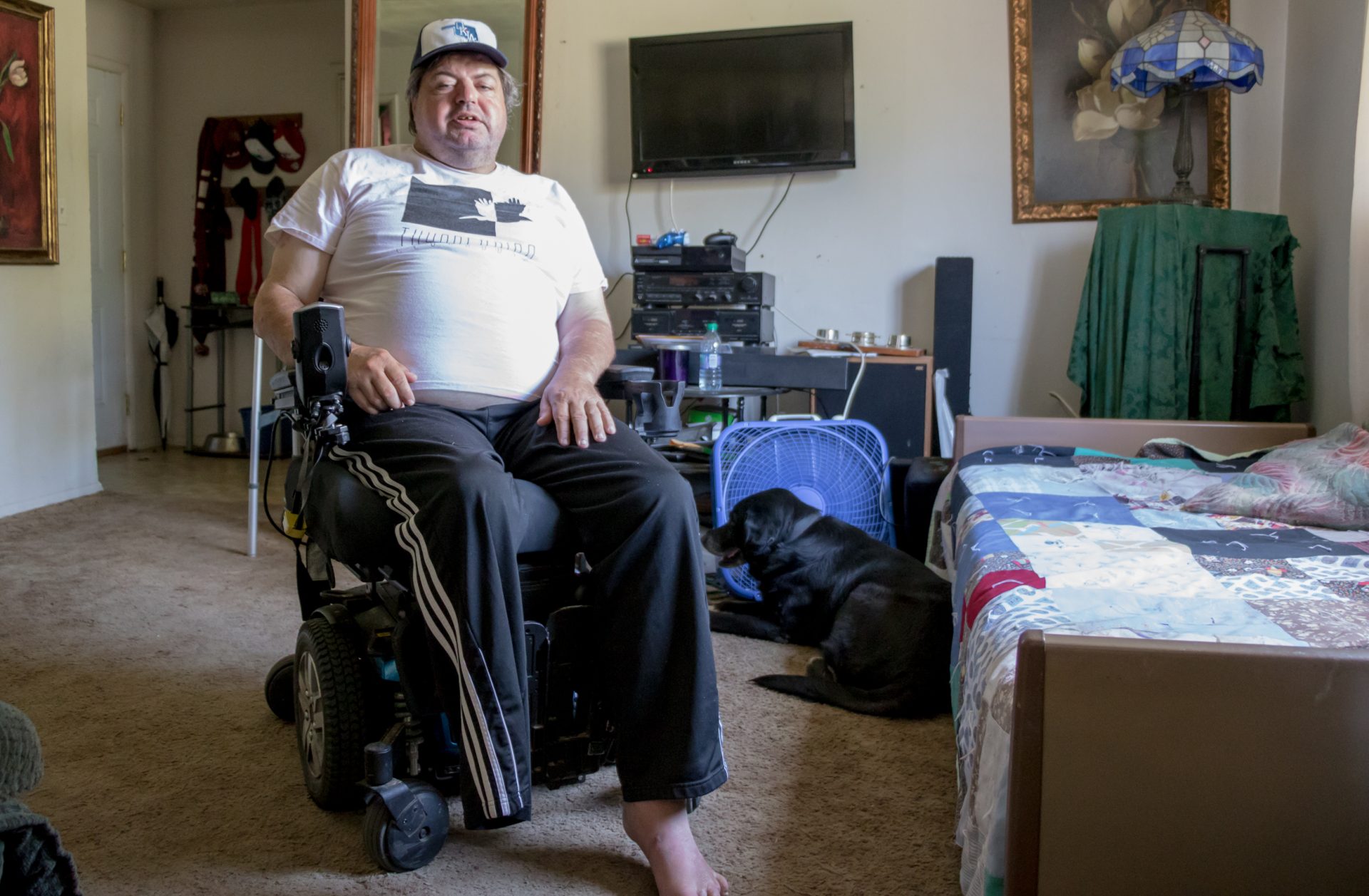 John High sits with his dog Angel in his house in Norman, Okla.

Sitting in his living room in Norman, John High says he’d like to see the public shelters reopened.

“Some people don’t even know the shelters are gone yet,” he said. “If you don’t need something, you don’t think about it until it’s necessary.”

If the shelters don’t re-open, High says he’ll keep trying to get financial assistance to get an accessible storm shelter in his home. He plans to put it in the garage, so he can easily drive his wheelchair in, but so far he’s encountered a web of regulations.

“Every time I hear the tornado siren, I fear, I fear for my life,” he said. “If a tornado comes through here, I’m going to be dead.”

This story is part of a series about the insufficient protections for vulnerable people as natural disasters worsen in a warming climate. StateImpact Oklahoma and four partners – the Atlanta Journal-Constitution, High Country News, Ohio Valley ReSource and the Center for Public Integrity – are contributing stories.