Pipeline protesters walk out of DEP hearing, calling it a ‘sham’ 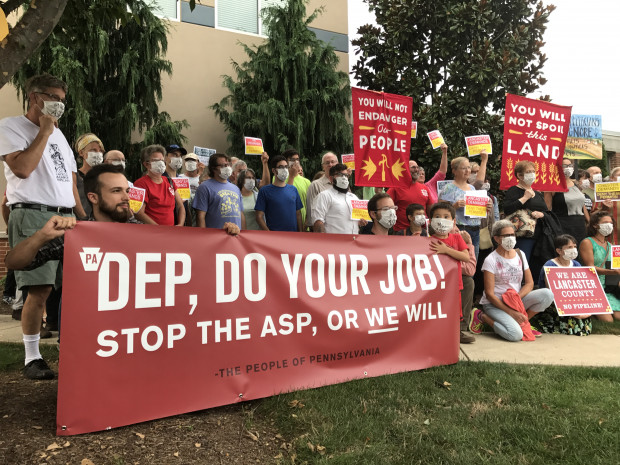 Dozens of people walked out of a hearing on an air quality plan for the Atlantic Sunrise Pipeline (ASP).

Dozens of people walked out of a Department of Environmental Protection hearing Monday in Lancaster County, while wearing surgical masks and accusing state regulators of failing to protect public health and safety.

The purpose of the hearing was to accept public comment on an air quality plan for the Atlantic Sunrise pipeline— a controversial interstate transmission line designed to link natural gas from northeastern Pennsylvania to markets along the eastern seaboard. The project is one of nearly a dozen major pipelines planned to move Marcellus Shale resources within the U.S. and abroad.

“We’re in a war for our clean air, our clean water, and our rights as landowners,” says Kim Kann of Conestoga. Williams, the company building the Atlantic Sunrise recently used eminent domain to condemn a portion of her property.

The air plan under consideration at DEP would allow Williams to offset air nitrogen oxide (NOx) emissions from its construction activities in Lancaster County, which is considered a non-attainment area for NOx.

After walking out, the group of about 70 people held a parallel hearing outside. They repeatedly read the agency’s mission statement, “to protect Pennsylvania’s air, land and water from pollution and to provide for the health and safety of its citizens through a cleaner environment.”

“God save us. Because the DEP will not,” he told the crowd.

The group was also critical of what they see as DEP’s hasty approval of permits for the Mariner East 2, a natural gas liquids pipeline under construction across the state. Portions of the work were recently halted temporarily by a state judge after dozens of contamination incidents and spills.

Elise Gerhart, who has been among the most vocal activists against the Mariner East 2 spoke about the encampment she and her family have been hosting on their land in Huntington County.

“We have faced a lot of repression,” she says, noting her mother has been sent to jail. “We are getting death threats now. That’s something to prepare yourselves for, but also do not be discouraged by it.”

DEP policy at these sorts of hearings is to listen and accept comments, without directly answering.

“The process is what it is,” agency spokesman John Repetz says in response to a question about whether the format can leave some people feeling they’re not heard.

“We can’t tell them what to think,” he adds. “There was enough interest for a public hearing for this topic. We want to hear what the public has to say.”

Stephanie Catarino Wissman, head of the Associated Petroleum Industries of Pennsylvania says pipelines help lower the cost of natural gas for consumers, power factories, and support jobs. She adds the multiyear process of developing the Atlantic Sunrise pipeline has been open for the public to participate.

“Voices are being heard,” she says. “Maybe some people don’t think that, but they truly are. You can’t get much more transparent than this.”