Pipeline protestors face arrest, charges on their own land 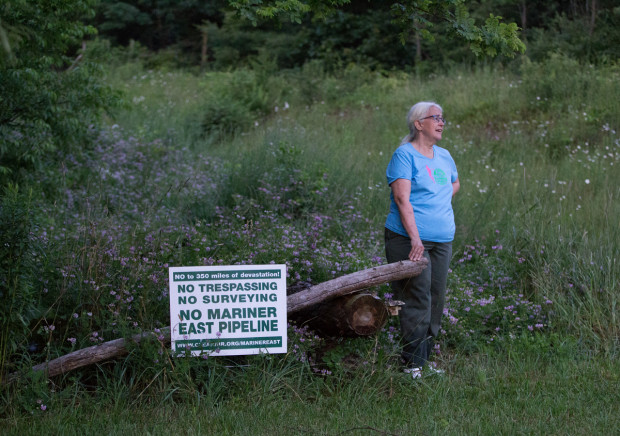 Ellen Gerhart has been battling with Sunoco Logistics over the construction of the Mariner East 2 pipeline on their property in Huntingdon County, Pennsylvania. Court has ordered her and her supporters to not interfere with pipeline construction. Some have been sitting in trees.

Responding to a request by Sunoco Logistics, a Huntingdon County judge has ordered a family and their supporters off the construction path of the Mariner East 2, which runs through their property. The ruling by Judge George Zanic means the family could be arrested on their own land.

Ellen and Stephen Gerhart oppose construction of the pipeline on their 27-acre property in Huntingdon, Pa. Their daughter Elise, along with supporters, have built tree houses in the three remaining white pine trees that stand in the way of construction. People have been living in the trees 24/7.

“This is my home, and my family’s home,” said 30-year-old Elise Gerhart, standing about 50 yards away from the tree houses, beneath a camouflaged shelter on her land. “People have a right to live in peace but these corporations think their right to make money trumps that. And I don’t agree with that.”

The Gerharts have up until this point, lost their court battle against Sunoco’s eminent domain taking. They have asked the Supreme Court to review their case. In the meantime, construction along the 350-mile natural gas liquids pipeline continues.

Supporters have pitched a handful of tents and built a large wood-burning stove to cook food near the Gerharts house on the property.  They call the small encampment Camp White Pine. Zip lines are strung between the trees where large protest signs hang. Sunoco could not remove the remaining three trees during their clear cut operation last year because Elise Gerhart was sitting in a platform in one tree about 50 feet off the ground.

Huntingdon County Court of Common Pleas judge George Zanic ordered the family on Wednesday to remove all tents and structures that are along the easement where Sunoco plans to build the pipeline. Zanic also ordered the family and their guests not to interfere with pipeline construction.

Ellen Gerhart, a retired public school teacher, has not been living up in the trees but says her family and their supporters will not comply with the judge’s order. The Gerharts say the pipeline would cause damage to their wetlands, poses a public safety hazard, and is not in the public interest. They take issue with the fact that the bulk of the natural gas liquids will be shipped overseas to make plastics. Gerhart says her family is just one of many families along the pipeline route that has felt bullied by the company. 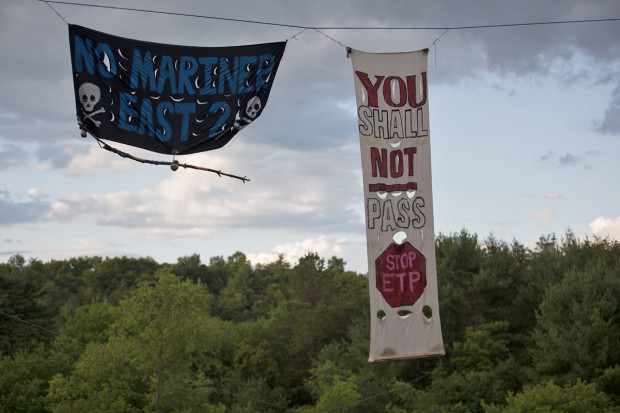 Sunoco Logistics is now a subsidiary of Energy Transfer Partners, the pipeline company that battled Native American protestors and their supporters in North Dakota over the Dakota Access Pipeline. ETP hired a private security firm, which used attack dogs against protestors. A recent article in The Intercept refers to documents that show the security firm TigerSwan is monitoring resistance to the construction of Mariner East 2.

Elise Gerhart says she’s well aware that she could be injured, arrested or spend time in jail for her actions.

“We know some of the tactics that Energy Transfer Partners uses [against protestors,]” she said. “We know how far ETP is willing to go.”

Still, she says she’s made the choice to employ direct action against construction of the Mariner East 2 to protect the environment and to stand up to what she sees as a corporation given too much power by government agencies that were designed to protect the land and the people living on it.

“I take the long view,” said Elise. “I see that there’s a lot of trouble ahead if we don’t fight.” 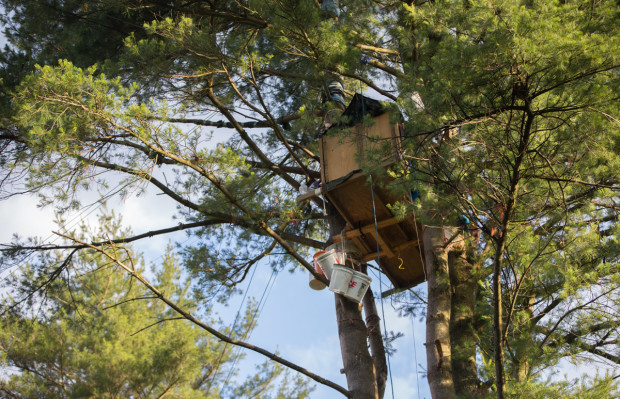 One of three platforms and treehouse like structures that were constructed in three pine trees and stand in the way of the Mariner East 2 pipeline in Huntingdon County, Pennsylvania. A court ordered the structure to be removed by Friday afternoon.

An attorney for Sunoco told judge Zanic during a hearing on Tuesday morning that the company had followed the law in condemning the property for eminent domain and that it needed to continue with construction to stay on schedule.

Judge Zanic had already issued a writ of possession to Sunoco in the case, which grants the company the right to evict the Gerharts from the easement. But Sunoco’s attorney Alan Boynton told the judge that wasn’t enough.

“Law enforcement was reluctant to enforce it,” said Boynton.

Sunoco spokesman Jeff Shields says the company has no comment other than what was said in court.

The Gerhart’s attorney, Rich Raiders, had argued the judge needed to consider the Supreme Court’s recent decision regarding the Environmental Rights Amendment. Raiders says the judiciary now has a duty to consider harm to the state’s natural resources when making decisions.

Although judge Zanic took a copy of the decision to read, it was not referenced in his injunction against the Gerharts.

Ellen Gerhart says she plans to appeal his decision to the Commonwealth Court.

Correction: An earlier version of this story mis-identified the family member sitting in the tree last year, it was Elise, not Ellen.