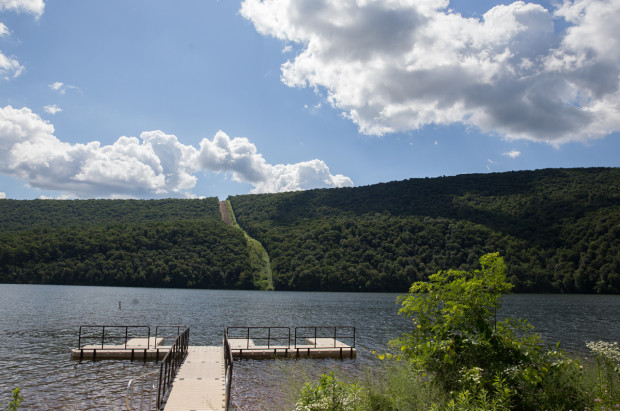 “Though we don’t regulate it, this private well issue has the potential to really blow up…,” wrote Domenic Rocco, waterways and wetlands program manager for the DEP’s Southeast regional office. Rocco sent the email detailing his conversation with a worried resident of Delaware County who lived near the pipeline route. He also sent a long list of concerns DEP program staff had regarding the agency’s permit reviews of Sunoco’s construction plans.

The email recipients included Ann Roda, director of the office of program information, John Hohenstein, DEP chief of dams and waterways, and Donald Knorr, a water pollution biologist with the Southeast regional office. It was released as part of ongoing litigation challenging Sunoco’s permits.

Pennsylvania does not regulate private drinking water wells. But DEP had made it a condition of Sunoco’s water-crossing permits to do a detailed inventory of private water wells and notify residents of the construction. In one email, Rocco referred to the company having identified 22 private water wells within 150 feet of the planned drilling operations. It’s unclear if that was the total number of private wells Sunoco found along the length of the 350 mile pipeline or just the section in the Southeast region.

DEP told StateImpact it is unaware of whether or not Sunoco identified all private wells along the pipeline path. And the agency also said it doesn’t know whether or not the company notified private well owners 72 hours before construction. If not, then the company would have technically violated the permit conditions.

Several residents of West Whiteland Township, Chester County who have been impacted by the drilling related to Mariner East 2 pipeline construction told StateImpact, as well as Sunoco officials at a public meeting, that they were not notified prior to the start of construction. In that case, 15 households had to stop using their well water after Sunoco’s drilling operation impacted the aquifer.

The Chester County incident is one of just a few publicly reported since the start of pipeline construction in February. But newly released documents now show dozens of spills have occurred across the state over the course of a two-month period between April and June.

In addition to a halt to drilling in the West Whiteland Township area of Chester County, a spokesman for Gov. Wolf says Sunoco has also suspended operations in LeTort Run, a stream in Cumberland County.

Among the 61 new spills documented by DEP and turned over as part of the lawsuit was an incident in Middlesex Township, Cumberland County, reported on June 2, in which about 80 gallons of water and drilling fluid “seeped upwards towards the surface in an “exceptional value” wetland. The spilled material was recovered, the document said.

In another spill, also on June 2, an estimated 1,500-2,000 gallons of drilling fluid escaped into another exceptional value wetland in the same township, according to the report, submitted by Sunoco to the DEP.

The spills prompted state lawmakers from both parties to urge the Wolf administration to halt the drilling, or stop construction of the pipeline altogether until officials can assure the public that water supplies are safe.

Wolf said in a statement late Thursday that he had directed DEP to do “what they are legally able and feel is appropriate to ensure the operator is held accountable to addressing these incidents and taking additional steps to prevent similar incidents from occurring.”

Wolf said he had heard from legislators and from residents who had called his office with concerns about the spills.

Rep. Leanne Krueger-Braneky, a Delaware County Democrat, repeated her call earlier this week for a complete halt to construction until the drilling issues can be resolved.

“I believe that given the 61 incidents that have happened so far in construction of this pipeline, the responsible thing to do is to halt construction until the DEP can complete its investigation and assure residents that their drinking water is safe,” she said.

She said there is a “growing number” of legislators from both parties that are concerned about the effects of pipeline construction, and that DEP “has a responsibility to take action.”

At a minimum, there should be a moratorium on horizontal drilling, Krueger-Braneky said, backing a call by state Senator Andrew Dinniman, also a Democrat.

Ann Roda, DEP director of office of program information, said during a deposition that took place July 14, that the agency did not notify the public when it received reports of the spills, and that Sunoco had been late in reporting what the agency now calls “inadvertent returns” but has since begun reporting them more promptly.

In response to questions from attorney Alex Bomstein with the Clean Air Council, which has challenged DEP’s permits for the project, Roda also said the department has received water supply complaints from both Blair County and Westmoreland County. In Westmoreland County, one private water well was impacted.

She said DEP has taken no action regarding those complaints.

Up until recently, the only water supply issues publicly reported were those in West Whiteland Township, Chester County.

Alex Bomstein, an attorney with the Clean Air Council, said he expects the Environmental Hearing Board will hold a hearing on the environmental group’s motion to halt horizontal directional drilling for Mariner East 2, although a date for the hearing has not yet been finalized.

Bomstein said he will initially ask the judge for a “temporary supersedeas” order that would halt drilling immediately until a full hearing on the motion. If that order is not granted, both sides will present arguments at the hearing which was tentatively set for early August.

In March, the EHB denied the council’s request to suspend the permits issued by the Department of Environmental Protection for the entire Mariner East 2 project. The new motion is confined to horizontal directional drilling for the pipeline. If the motion is granted, Sunoco could still proceed with pipeline construction using conventional drilling and open-trench techniques, Bomstein said.

“We are focusing specifically on the spills and the contamination of water supplies,” he said.

The drilling mud, also known as bentonite, is non-toxic and commonly used as a lubricant in drilling operations. But the mud can clog up an aquifer, resulting in dry wells or wells that produce cloudy water. Large amounts of mud that enter streams or wetlands could impact aquatic life.

Marie Kurz is an aqueous geochemist and senior scientist at The Academy of Natural Sciences of Drexel University’s Patrick Center for Environmental Research.

Kurz says when it comes to drilling mud spills, streams are resilient, because the water is moving quickly and it can flush the mud downstream. The spill can also be seen, allowing for a quick response that often includes isolating the mud and vacuuming it out of the stream bed. But aquifers hidden below ground, and are not so adaptable to that type of contamination.

“Flow through an aquifer is so slow,” Kurz said. “Most of the time you’re looking at centimeters a day. The only way to get it out is to force water into one side and out the other. It’s like trying to suck water out of a glass of ice.”

Kurt says one drilling mud spill here and there would not have a significant impact, but with so many spills reported, often in the same watershed, Sunoco’s construction could have a cumulative effect on particular watersheds.

“If they drain into a common point downstream, it may have an impact,” she said.