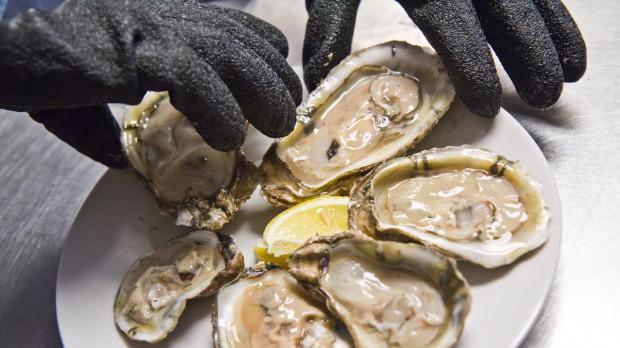 The Delaware Bay was once known as the oyster capital of the world. In the 1920s, there were about 600 boats fishing wild oysters from the bay. Today, there are only 12 oyster boats.

Delaware Bay oysters are on their way back after decades of decline. But questions remain on how climate change will impact the resurgence in the South Jersey towns once known for shipping oysters across the country.

Last century, the South Jersey communities of Bivalve and Shell Pile in Cumberland County, produced over 1 million bushels of oysters, or about 80 million pounds, a year. In 1905, there were 588 boats fishing wild oysters from natural beds in the bay. And oysters were shipped, by train, all over the country and up to Canada. In 2016, the oyster fishery harvested 100,095 bushels a year.

“At one time there were car dealers and movie theaters, and department stores, and tons and tons of speakeasies,” Bivalve Bayshore Center’s restaurant manager Sheri Gatier said. “(Bivalve) was a very big thing when the oyster industry was booming. Unfortunately, when (the oysters) died… it died.”

In the 1950s, an oyster disease known as MSX killed about 90 percent of the oysters in the bay, and almost everyone left town. The oysters became resistant to MSX in a couple of years, but in the 1990s, oysters were hit by a new parasite called Dermo.

Long-term efforts lead by the New Jersey Department of Environmental Protection, Rutgers University, and oyster fishermen to manage the resource through fishing quotas are finally paying off. Last year’s oyster harvest was 100,095 bushels, 12,665 bushels larger than in 2015, and the largest in five years. And this year, oystermen are allowed to harvest 124,000 bushels, the largest quota since 1996. 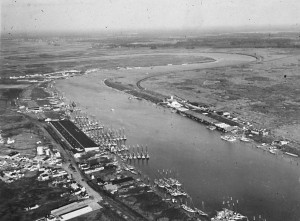 The aerial photo shows Bivalve to the left and the community of Maurice River to the right. Maurice River had shucking houses and was serviced by the West Jersey and Seashore Railroad, a Pennsylvania Railroad subsidiary. Bivalve was served by the Central Railroad of New Jersey. Bivalve, NJ

The Bayshore Center in Bivalve is the only remaining evidence of the oyster industry’s early century prominence in South Jersey. The Center includes a museum, a restaurant, a restored oyster dredging schooner, the A.J. Meerwald, built in 1928, and a railroad car.

“You have to imagine about 40 box cars here lined up,” Bayshore Center’s curator Rachel Dolhanczyk said, standing next to the museum. “They would do two shipments a day, one in the morning and one later in the day.”

Dolhanczyk says there were more millionaires here than anywhere else in New Jersey, but it’s hard to imagine. Today, the quiet town is dotted with abandoned Victorian houses. The port at the mouth of the Maurice River has no more than 12 oyster boats docked. In addition to the Bayshore Center, Bivalve includes Rutgers University Haskin Shellfish Research Lab, an oyster packing company, and an oyster farm.

Steve Fleetwood is one of the few remaining oyster fishermen. He’s been in the business for 40 years, 30 as the head of the Bivalve Packing Company. Fleetwood remembers the hard times when MSX and Dermo put him out of work. 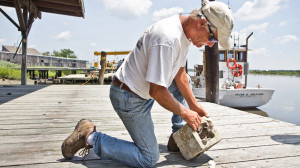 Steve Fleetwood on his dock at the Maurice River.

“It’s tough when you’re doing something that you really like but you can’t tell your kids to come here and work with you,” Fleetwood said.

But as scientists and fishermen started working together, oysters started coming back. And because oysters are trendier now, the business is even better.

“It’s a yuppy thing, you know, going to a raw bar, eat three or four different kind of oysters,” Fleetwood said. “But that kind of threw the industry around I think, and people are looking for that nice looking, nice meat oyster… and we got it.”

Fleetwood thinks now the oyster business is something his grandchildren could pursue. “I have one, I hope I can tell him that,” Fleetwood said.

In 2016, there were 1.8 billion oysters in the natural beds of the Jersey portion of the bay, according to Rutgers’ stock assessment.  That’s a record. And today there’s more baby oysters, or spats, than in 10 years. So, if mortality caused by the oyster parasite Dermo keeps going down, the industry might see glory days again. 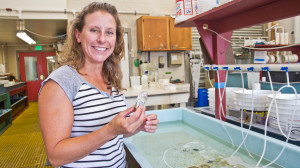 But Rutgers’ scientist Daphne Munroe said climate change could bring a new set of uncertainties for the oyster business.

The oyster parasite, Dermo, thrives in high salinity, Munroe said. Because of that, oyster beds located further north in the Bay have less mortality. But sea level rise could push salt water further up, increasing oyster mortality from Dermo. Climate scientists also predict heavier and more frequent rain storms, which could help mitigate the impact of sea level rise. “If storm frequency and precipitation increases,” Munroe said, “that helps to push the salt wedge back down bay. And so you get these kinds of conflicting forces.” But too much freshwater is also a problem. Irene and Sandy destroyed 80 percent of the oyster beds.

Another uncertainty is what will happen with warming oceans. Studies show that higher temperatures may be good for oysters because it makes them grow faster. But Munroe said warmer water could also bring more predators like jelly fish or crabs.

Despite the uncertainties related to climate change, you can feel the optimism in the Bivalve’s air, which today if full of the scent of shellfish. The fishery is generating about $18 million dollars for the region’s economy. 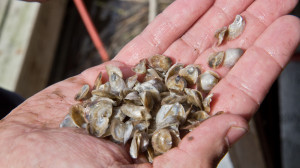 In the pools of Cape May Salts oyster farm in Bivalve, oysters seeds grow from 2 millimeters to half an inch. Farmers don't need to feed them, they get food by filtering the water.

Brian Harman farms his oysters, instead of harvesting them in the wild. His company, Cape May Salts, and other oyster farms in the area purchase oysters seeds, or baby oysters, from Rutgers’ Haskin lab and then grow them in the Bay.

“Each year the industry is growing in our state, and oyster farming, locally in the Delaware Bay, has tremendous potential for growth,” Harman said.

Harman — who’s the first one in his family to harvest oysters—  recently opened a farm in Bivalve, next to the Bayshore Center. His company produced 4 million oysters this year, but they have their sights set for a much bigger number.

Sheri Gatier, from the restaurant, says there are rumors of another big company coming in.

“The fact that the oysters are coming back is going to revitalize this area and really help a nice little home town to thrive again,” Gatier said.

Harman thinks the golden days New Jersey oysters will return. It may take a while, he said, especially for the fishery. But for deep water aquaculture, Harman said there are thousands of acres of Delaware Bay bottom that could support oysters.