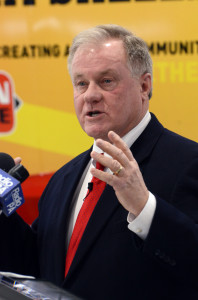 Over a dozen county commissioners from Pennsylvania’s northern tier are working to organize around an issue that directly impacts their constituents: natural gas drilling.

Organizers said Harrisburg often neglects the interests of its more far-flung counties. They described their keynote speaker as someone who’s gone against that trend– York County Republican senator and gubernatorial hopeful, Scott Wagner, has supported natural gas drilling since he was elected.

Wagner noted repeatedly that this wasn’t a campaign event, though that didn’t stop a few speakers from remarking that it would be nice to have a governor who would reduce regulations on the gas industry.

Amid his calls to get pipelines flowing, Wagner did take the opportunity to lay out some policy proposals–and try out some catchphrases.

This year, the commonwealth is expecting about $80 million in royalties from drilling in state forests.

He also took the stance that climate change is probably happening, though–citing scientifically unsound evidence–he maintained that the US shouldn’t worry too much about emissions.

He added, “We have more people. You know, humans have warm bodies. So is heat coming off? Things are changing, but I think we are, as a society, doing the best we can.”

Bradford County commissioner, Doug McLinko, said Wagner has been a great help in efforts to organize various rural counties, noting that the senator has always been eager to visit the northern tier and see the drilling and its impact for himself.