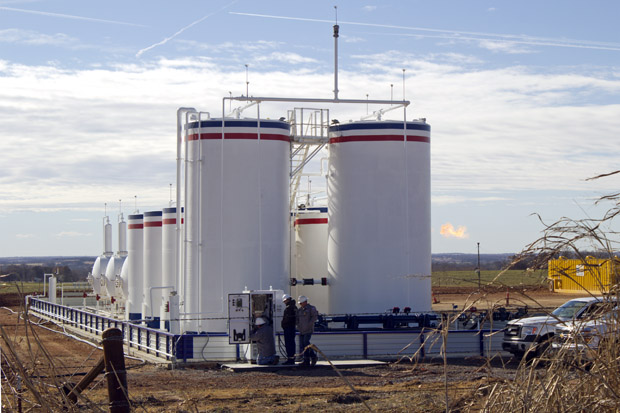 Pennsylvania environmental regulators have approved two new underground injection wells to take in wastewater from the oil and gas industry.

Pennsylvania already has six active injection wells, according to Scott Perry, who runs the Office of Oil and Gas Management at the state Department of Environmental Protection. He says new injection wells are needed as gas drilling activity has slowed. In busier times, the wastewater was often reused in the next well.

“Pennsylvania has been leading the nation, if not the world, in recycling flowback water,” says Perry.

The two new injection wells will be operated by different companies. Seneca Resources will have a well in Elk County, and another will be run by Pennsylvania General Energy Company in Indiana County. Both have faced significant pushback from the local municipalities.

“This project began in earnest in 2012 and has been subject to lengthy and intense scrutiny by all interested parties,” Seneca spokesman Rob Boulware writes in an email. “As the EPA did before it, Pa. DEP carefully considered Seneca’s application and confirmed through its approval that the project met all lawful regulations. Seneca looks forward to implementing this project.”

Amid problems with underground injection wells in other states like Oklahoma, the DEP is trying to allay fears the wells could trigger man-made earthquakes

“The operators have proposed to use depleted oil and gas reservoirs for their disposal wells,” says Perry. “That’s what gives DEP a lot of confidence in how they can be operated in an environmentally sound and safe manner. These same reservoirs have held a very buoyant material– like oil and natural gas– in place for literally, a millennia.”

More disposal wells are in the works, according to Perry. The DEP is currently reviewing two more applications. He believes as many as a dozen are pending before the EPA. He says the department has applied special conditions to the two permits to ensure the early detection of seismic events.

According a DEP news release, the conditions include:

• Installation of a seismometer and continuous recorder with operating, calibration, service, and maintenance information at the disposal well site; and the contact information for the responsible person in charge of conducting seismic monitoring activities.

• Verification that data is captured at the disposal well site and provided to the Incorporated Research Institutions for Seismology (IRIS) Network in real time.

• Description of installation to allow for optimal seismic event identification and location.

• Provision for updating the seismic monitoring and mitigation plan, retaining seismic event data and equipment records, and submitting reports on the use of monitoring equipment.

In addition, these wells are permitted at much lower pressures, and in formations farther from the “basement” rock that is more prone to activity, than the wells in other states that have been linked to seismic activity.

The state recently completed a major expansion of its seismic monitoring network, in an effort to keep a closer eye on earthquake activity. Last month the DEP linked hydraulic fracturing operations with a small earthquake in Lawrence County. Although oil and gas-related quakes tend to be connected to the use of disposal wells, this was the first time state regulators linked an earthquake to hydraulic fracturing.