Sen. Scott Wagner officially kicks off his campaign for governor 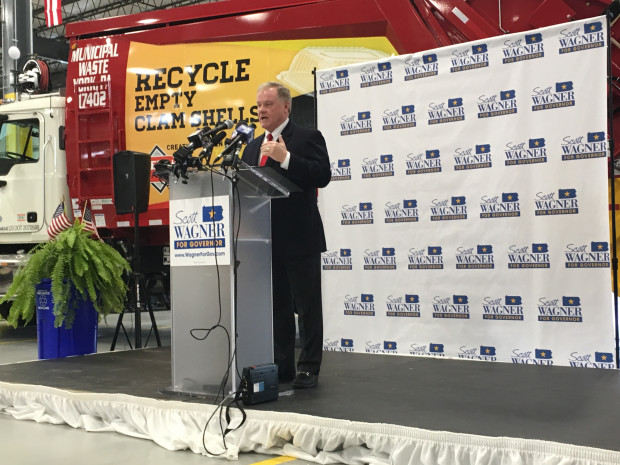 Republican State Senator Scott Wagner is the first person to throw his hat into the 2018 race for governor. He made the official announcement Wednesday at the York County headquarters of his trash hauling company.

A conservative first-term senator and businessman, Wagner’s making it clear that he is running on a similar outsider platform as president-elect Donald Trump.

“I started my first business when I was 20 years old,” he said at one point. “When you start out with two trucks and two employees and you build that company to 350 employees—you know, I’ve learned you can, surround yourself with the best people.”

Wagner took a largely anti-Harrisburg tack, promising to cut down on red tape.

But the policy proposals he threw out were largely in line with current GOP priorities: getting rid of school property taxes, avoiding other broad-based tax hikes, and privatizing liquor.

“I sincerely believe that we do not have a revenue problem, we have a spending problem,” he said.

The state’s projected to come up at least $600 million short in revenue this fiscal year, on top of a nearly $2 billion structural deficit.

As Wagner spoke, a handful of protestors stood in the street outside the trash facility.

Most were former workers from the state’s unemployment compensation program, who were laid off after a political dispute over funding.

They believe Wagner—who took credit for blocking the UC funding—is at fault.

Wagner maintains the funding was irresponsible, and says Democratic Governor Tom Wolf is to blame.

Wagner’s continuing his announcement tour around the state; he made additional stops in Pipersville and Frackville Wednesday, and on Thursday he’ll be in Altoona, Murrysville, and Lake City.