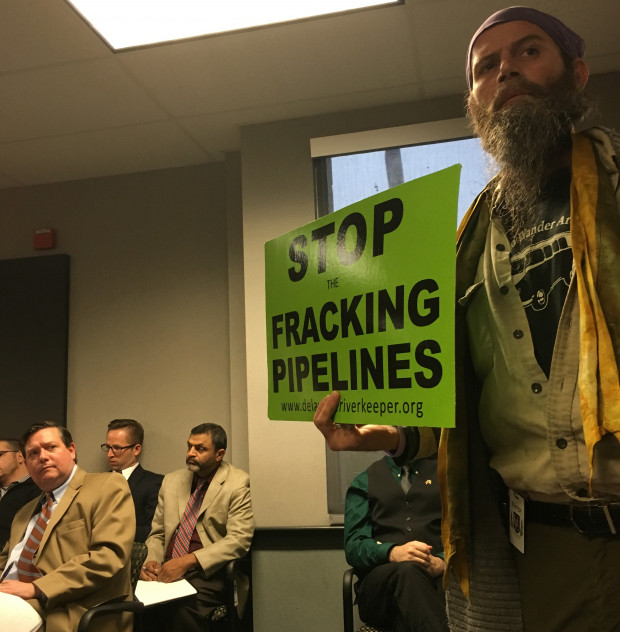 A scene from one of the many contentious public meetings of the state's pipeline infrastructure task force.

Pennsylvania has rapidly become a hub for the development of new natural gas pipelines. In recent weeks, billions of dollars worth of projects have been approved by state and federal regulators. Shortly after he took office, Governor Tom Wolf convened a major task force to recommend ways to coordinate planning and best practices for this building boom.

But a year after the panel issued a report with 184 recommendations, it appears much of its work has been ignored.

“Put on a shelf somewhere”

For one thing, it was really big, with 48 members and another 100 volunteers on workgroups. They also had a hard time agreeing on anything. There were representatives from the gas industry, government, academia and environmental groups, and they weren’t exactly all on the same page.

Finally, the public meetings were often disrupted by protesters. At the last meeting, about a year ago, seven people were arrested. The whole effort was spearheaded by then-secretary of the state Department of Environmental Protection, John Quigley.

At the group’s final meeting, he said the report was just a first step, and state’s work on pipelines should continue.

“This is the start of a conversation,” Quigley told the group. “This is fertile ground. I do believe this is a very fertile document that can generate a lot of positives.”

Among the report’s 184 recommendations were calls to do things like increase public participation and planning, beefing up pipeline safety requirements, and coordinating permitting. At that same final meeting, Senator Andy Dinniman (D- Chester) criticized the entire process. He didn’t think anyone in the legislature had even heard of the task force or it’s report.

“Much of this is going to require legislative action,” he said.

If the pipeline task force is to have any relevance, Dinniman said, the report should be shared widely with the legislature.

“Otherwise, like all task force reports, it gets put on a shelf somewhere.”

Last May, Quigley lost his job. With his departure, it appears much of the work stopped.

Unlike former Governor Tom Corbett’s, Marcellus Shale Advisory Commission, which issued a report that ultimately helped shape Act 13 (Pennsylvania’s updated oil and gas law), not much has happened with the pipeline report.

“I haven’t followed up”

Dan Devlin hasn’t talked to anyone at DEP about it in about a year. He heads the Bureau of Forestry at the Department of Conservation and Natural resources and was on the task force.

“I haven’t personally followed up,” he says. “I probably should have.”

His agency is still doing things it was already doing, like trying to co-locate pipelines with existing rights-of-way, and monitoring for the threat of invasive species. However, he praises the task force for giving him a chance to meet a lot of people from different backgrounds.

“I think that was one of the big things,” says Devlin. “We all got to see what each other was doing and kind of learn from each other.”

Denise Brinely, was on the task force too, representing the state Department of Community and Economic Development. She says her department has tried to communicate early on with other agencies.

“But as you know,” she says. “That report was very dense and it contained a lot of information.”

Her job is focused on trying to get Marcellus Shale resources to be used within the state, and she says right now most of the products are leaving Pennsylvania’s borders.

Meanwhile, others see the state’s role as basically getting out of the way.

“If these pipelines don’t go forward, then all the prosperity that this gas resource can bring to Pennsylvania is delayed or stopped,” says Rep. John Maher (R- Allegheny)

He wasn’t on the task force, but chairs the House Environmental Resources and Energy Committee. He’s pleased with Patrick McDonnell, who replaced Quigley as DEP head. In the past few weeks, the agency has issued permits for two major pipelines– the PennEast and Mariner East 2.

Maher’s hopeful that will continue, but worries rank and file staff could slow things down.

“Sometimes the sailors on the ship don’t care much what the captain thinks,” says Maher. “We’ll see in this case whether the sailors are paying attention to the captain or not.”

For his part, as “Captain” (or Acting DEP Secretary) Patrick McDonnell says the agency is addressing the task force recommendations. He says an internal working group is handling it. And points to a new web portal they created to be a hub of information on pipelines.

“Pushing out more on the public participation front has been a biggie,” he says. “There were a number of recommendations in that regard, in particular.”

One of the few things the task force generally agreed on was that pipeline projects need better public relations.

So how’s that going? It’s debatable.

Last week a group in Lancaster County started an encampment and announced plans to engage in nonviolent direct action to disrupt construction of the Atlantic Sunrise pipeline.

Meanwhile, gas industry representatives who served on the pipeline task force have said they found it to be a frustrating process, and they didn’t expect much to come of it.