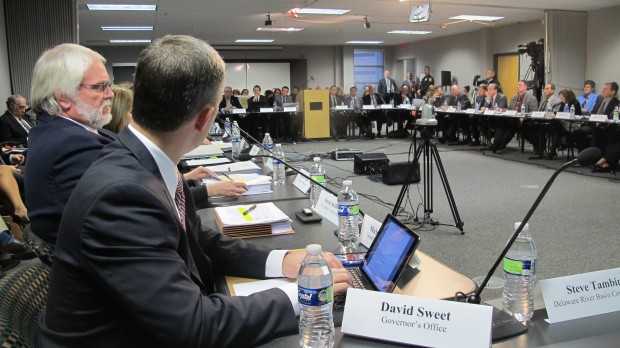 Forty-eight people served on the governor's Pipeline Infrastructure Task Force, and the meetings were often interrupted by pipeline opponents.

Two members of Governor Tom Wolf’s Pipeline Infrastructure Task Force say it was a frustrating experience.
“It was a difficult thing for me personally and professionally,” says Cindy Ivey of the pipeline company, Williams. “I was probably the only task force member called out by name in a very unflattering way. It was a very toxic environment.”
The volunteer panel was convened last year to develop best practices for Pennsylvania’s ongoing pipeline building boom. It was made up of representatives from industry, environmental groups, and government. They focused on things like siting, permitting, environmental protection, safety, and community engagement.
The gatherings in Harrisburg had a circus-like atmosphere at times, with organized anti-fracking protests and emotional pleas from landowners who say the industry has bullied them. At the final meeting in January, seven people were arrested for disorderly conduct.
Sarah Battisti of Southwestern Energy says she was frustrated by the general lack of knowledge about pipelines.
“It was incredibly difficult to get down to get best practices,” she says. “The largest takeaway for all of us in the industry was education. Folks don’t understand midstream, upstream, downstream– let alone the regulations.”
For example, states don’t have much of a role in the big interstate pipeline projects, which are regulated almost exclusively by the federal government.
“Those were hard things to try to explain gracefully,” says Ivey. “That was a real disconnect for the task force.”
The two women spoke about their experiences Tuesday at a the Upstream PA conference held in State College. Both praised the effort as well-intentioned, but Battisti says the final report, which includes 184 recommendations is large.
“It is unwieldy. I wouldn’t call it un-useful; I’d call it a nice start,” she says.  “I don’t think there’s going to a large impact to any of us in the immediate future.”
The report was delivered to the governor in February and is currently under review. A spokesman for the state Department of Environmental Protection declined to comment for this story.