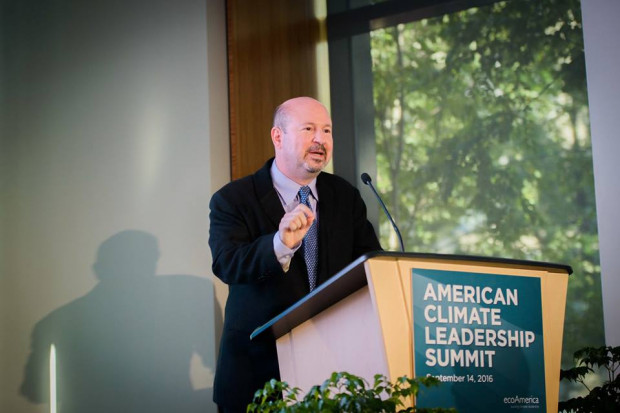 "I couldn't have outlined anything more bleak than what we've seen," Dr. Mann says of Trump's election. Michael Mann

Dr. Michael E. Mann is a distinguished professor of atmospheric science at Penn State University and one of the most vocal advocates for climate action within the scientific community.

His latest book, with Washington Post cartoonist Tom Toles, is called, “The Madhouse Effect: How Climate Change Denial Is Threatening Our Planet, Destroying Our Politics, and Driving Us Crazy.”

Mann recently sat down with StateImpact Pennsylvania to talk about the death threats he’s received over the years, his views the natural gas boom, and his concerns about Donald Trump.

This interview has been edited for length and clarity.

Q: You’ve been in the cross-hairs of this public debate for a long time. What are you expecting from the incoming Trump administration?

Scott Priutt, who’s been appointed to EPA, has sued the EPA in the past over their efforts to act on climate change. Rick Perry, who has been appointed to the Department of Energy, said he would eliminate [the department]. He’s on record dismissing even the fact that the globe is warming. There’s an overwhelming consensus among the world’s scientists that human actions—the burning of fossil fuels—is responsible.

Q: How did we end up here? There was almost no discussion of climate change during the election. If you believe scientists, it’s pretty much the existential threat to humanity.

A: It isn’t just the scientists. Talk to our national security experts and they’ll tell you the greatest national security threat we face in the years ahead is climate change, because it exacerbates existing tensions—the battle for water, food, and land. Hundreds of CEOs of major corporations are on record saying, this is a real threat to our economy, if we don’t do something about it.

Climate change didn’t get the attention it deserved. It wasn’t for lack of trying on the part of Hillary Clinton. Full disclosure—I was a member of her advisory board on energy and climate. She’d go out of her way to comment on climate change, even in answering questions that weren’t explicitly about it. It didn’t seem to catch on. I won’t criticize all media outlets, but writ large, our mainstream media didn’t seem very interested.

Q: You wrote recently in The Washington Post about some of the attacks you’ve faced over the years. You’re somewhat unique among scientists in that you communicate a lot, and very vocally with the public. What’s that been like for you?

A: That’s not how I started out. I was a science nerd in high school.  I went off to college at U.C. Berkeley to study applied math and physics. I ended up going into the field of climate science.

Ultimately, my coauthors and I published this graph in the late 1990’s that came to be known as the ‘hockey stick.’ It depicts how temperatures have changed over the last thousand years. When you look at that graph, it becomes obvious that the warming we’re seeing now is unprecedented. It became iconic in the climate change debate. All of sudden, whether I liked it or not, I became a public figure in this very contentious debate over climate change.

I’ve embraced the role because it’s provided me with an opportunity to inform this discussion. I’ve written a whole book, “The Hockey Stick and the Climate Wars,” which is about my transition from a very reluctant ‘nerd scientist’ to somebody who has become passionate about communicating the science and its implications to the public.

Q: What are some of the most drastic things that have happened to you?

A: There are powerful, vested fossil fuel interests—the Koch brothers—who have literally spent tens of millions of dollars attacking the science and the scientists.

I’ve been subject to their attacks, or attacks facilitated by them. It’s amounted to getting death threats and getting all sorts of nasty emails and letters. There have been actionable threats to members of my family. I had an envelope with a white powder sent to my office at Penn State. We had to have the FBI investigate. There was police tape over my door. I had to explain that to my colleagues.

It’s not the sort of thing you think you ought to be spending your time worrying about. It’s not part of the official job description of being a professor and a climate scientist. Unfortunately, it has become part of what it means to be a scientist studying and communicating about his very public and contentious issue.

Q: Are you fearful of the Trump administration? What do you intend to do, personally?

A: I’ll continue to do what I’ve been doing. If anything, it’s energized me because it’s all the more important that we have an informed citizenry, so we hold policymakers accountable for acting in good faith on this problem.

Q: What can people do if they’re concerned about climate change?

The good news is, if you start looking elsewhere, you see some reasons for cautious optimism. If you look to California, led by Governor Jerry Brown, who is a good friend of mine—he’s personally stated his commitment to act. You’ve got the whole West Coast. Washington and Oregon are part of an alliance, along with British Columbia. Then you’ve got the New England states that are part of an alliance. It turns out, about a third of the public live in states that are part of consortiums that are acting. We’re seeing progress at the state level.

The future is a clean energy future. That’s where the world is headed. We have to decide whether to get on that train now, and be part of the solution, or be left out of the greatest economic revolution of this century.

Q: Pennsylvania has tapped into a huge reserve of natural gas in the Marcellus Shale. How do you feel about the ongoing shift in electric power generation? Gas has been cutting into the market share of coal, which is a dirtier fossil fuel. Gas is often touted as a bridge to a cleaner future.

A: I’ll be blunt. I personally see that as a bridge to nowhere. Natural gas, it’s been argued, has a lower carbon footprint than coal, so it’s preferable. But you do generate greenhouse gases. There are some legitimate uncertainties. We don’t know how much methane—natural gas is basically methane—is escaping as fugitive emissions. That could offset any nominal gain that natural gas might have over coal.

But bottom line, the solution to a problem created by fossil fuels cannot be burning more fossil fuels.

Q: Trump may seek to roll back new EPA rules on methane emissions. Here in Pennsylvania, Gov. Tom Wolf’s administration is creating new methane rules. If we really crack down on those fugitive emissions, does gas have a temporary climate benefit?

A: There is the potential, if we take that seriously. If we put in place regulations that really do limit the prospect of emissions, then it could be a player. I’m all for finding ways that we can safely use fossil fuels. For example, coal. If we had economically viable carbon capture and sequestration—if power plants could capture the CO2 they’re producing and bury it— then that would be viable strategy for producing energy without worsening climate change. The problem is, it’s expensive to do that.

Q: Trump has said he wants to pull the U.S. out of the Paris climate agreement. Even if we remain on board with that, it’s not enough, right?

A: That’s right. The Paris agreement alone isn’t going to achieve what we really need to achieve, which is limiting warming below the commonly accepted dangerous level of 2 degrees Celsius. The commitments made in Paris get us about halfway there. It’s a first step, and it’s something we need to build on. In the end, we don’t control the will of the world anymore.

If there’s one commitment Donald Trump has emphasized over the course of the election, it’s ‘Making America Great,’—and I’m paraphrasing. If he’s really committed to making us great, it means making us competitive when it comes to producing renewable energy, like wind turbines, and solar panels. Are we going to let China and the rest of the world do all that?

Q: You left out the word ‘again,’ which harks back to a time with more coal mining jobs.

A: {Laughs} I was being generous with my rephrasing.