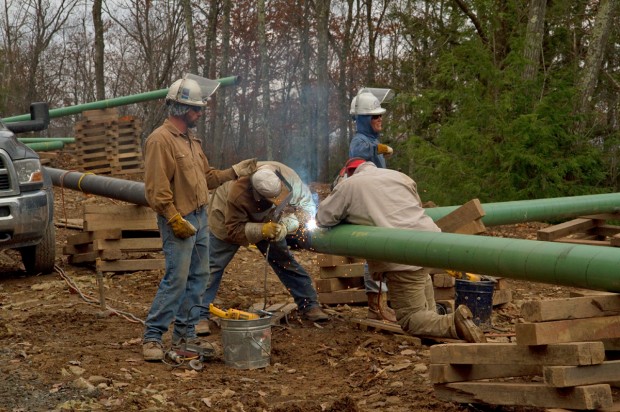 Workers weld a pipeline connecting to a natural gas well in the Loyalsock State Forest. A new report says the pipeline welds on the proposed Mariner East 2 line would exceed federal safety standards.

Public debate over the safety of the proposed Mariner East 2 natural gas liquids pipeline was fueled with the publication of a consultant’s report endorsing Sunoco Logistics‘ plans on one section of the line in Chester County, while critics said the report failed to address what could happen if there was a leak. The report by Accufacts assessed the safety of the project in West Goshen Township, and concluded that Sunoco’s plans exceed federal minimum safety requirements. It said the proposed 20-inch pipe would be tested to a standard beyond U.S. pipeline safety regulations, and that the type of coating to be used on the line essentially eliminates the likelihood of seam corrosion. It was not immediately clear whether Mariner East 2 continues to exceed federal safety regulations in light of new rules published by the Pipeline and Hazardous Materials Safety Administration on Friday.

The nine-page document, commissioned by the township and released by it on Thursday, also said the company would test pipeline welds to a standard exceeding federal requirements, and that the valves planned for the project would be appropriate to withstand proposed operating pressures.

On the detection of any leaks, a focus of concern by opponents in West Goshen and nearby townships, the report said Sunoco would install a computerized system that would scan for possible ruptures and automatically shut the whole line if a break was detected.

It also praised Sunoco’s plans to give a control room operator the authority to shut down a pipeline without approval from a supervisor, in order to eliminate delay in making such a decision.

Overall, Sunoco’s plan for ME2 “meets or exceeds the prudent technical approaches commensurate with the safe transportation of HVLs,” the report said, referring to highly volatile liquids that would be pumped from western Pennsylvania to a processing and export facility at the Marcus Hook Industrial Complex near Philadelphia.

The company, which is still awaiting some permits from the Pennsylvania Department of Environmental Protection, says it expects to begin construction of the 350-mile line by late winter or early spring, and to start operations in the third quarter of this year.

Accufacts President Richard Kuprewicz reached similar conclusions in an earlier report about the existing Mariner East 1 line that has been repurposed to carry propane and ethane to Marcus Hook.

The new report did little to calm the fears of critics, especially at the densely populated eastern end of the line where several communities, including West Goshen, have drafted official declarations expressing their concern that the new pipeline would expose residents to toxic or explosive gases if there was a leak or rupture.

“This report, like the first one, is nearly useless to decision makers,” said Eric Friedman, a member of the Middletown Coalition for Community Safety, a group in neighboring Delaware County that opposes the pipeline. “It provides no assessment of risk in terms of severity and probability. Nor, like the first report, does it have anything specific to say about practical emergency response planning.”

Sunoco’s plan to locate a valve in the township adds to the potential hazard because it could be a target for vandals or even terrorists, Friedman said.

In Middletown, concerns about the safety of the $2.5 billion pipeline have prompted calls for an independent risk analysis in order to inform an emergency plan for first responders and the public in the event of a leak or explosion.

The town’s Pipeline Safety Advisory Committee, a group of citizens, is urging the Township Council to approve a so-called Quantitative Risk Analysis (QRA) that would be conducted by an independent company in coming weeks.

Seth Kovnat, a committee member, told a council meeting this week that the liquids carried by the line would convert to gas if there is a leak, which he said would be “virtually impossible” to stop. Even if planned valves between Middletown and Thornbury were closed off, there would still be enough compressed gas left in the line to have the combustion equivalent of a small nuclear bomb, he said.

Such projections have been made on the basis of physics, chemistry and engineering, Kovnat said, but the specifics of local risks such as potential impact areas, evacuation zones, and event timings, will only be known through a formal risk analysis.

He urged the council to approve an analysis, which is expected to cost about $50,000. A further $50,000 would be spent on an emergency response plan. Both projects would be paid for out of $1.8 million that Sunoco agreed to pay to Middletown in return for permission to build the pipeline on four parcels of public land.

“It is our hope, and I think the larger community’s expectation, that council understand the urgency of getting this QRA initiated as soon as possible,” Kovnat told a meeting on Jan. 9. “We need emergency procedures in place well in advance of pipeline installation.”

The council is expected to make a formal decision on the analysis at a public meeting on Jan. 23. Council chairman Mark Kirchgasser denied speculation that the council would decide not to order the analysis but wanted to ensure that the right kind of study would be commissioned.

“The expert safety analysis of our Mariner East 2 project has confirmed, once again, that Sunoco Logistics goes far beyond federal requirements to ensure the safe operation of its pipeline,” Shields said.

While the report focuses on West Goshen, some if its conclusions show that Sunoco applies rigorous safety standards throughout its system, he said. For example, the company x-rays 100 percent of its welds, exceeding a federal requirement of at least 10 percent.