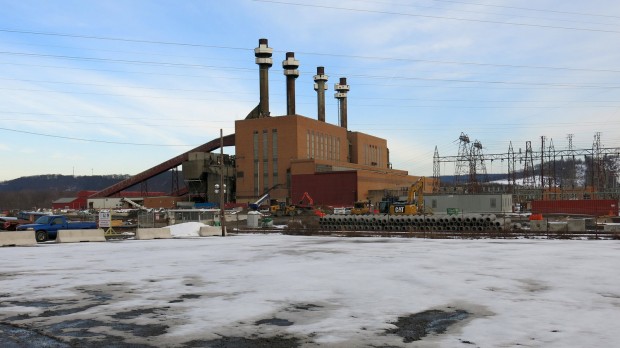 The coal plant in Shamokin Dam delivered electricity to the region for more than six decades. It closed in 2014. Next to it, a new natural gas power plant is under construction. The Sunbury Pipeline will feed Marcellus Shale gas into that plant.

A new 20-inch pipeline designed to deliver Marcellus Shale gas to a power plant in central Pennsylvania is nearing completion.
UGI Energy Services’s $150 million Sunbury pipeline is expected to be in service early next month. The line begins in Lycoming County and runs 35 miles southward. It’s designed to feed the new Hummel Station power plant, which is under construction at the site of the former Sunbury coal plant in Shamokin Dam, Synder County. The power plant is expected to come online in early 2018.
“The pipeline is in place along its entire route,” says UGI spokesman Ken Robinson. “Thursday of last week, the pipeline underwent a standard procedure known as ‘purge and pack.’ During this process, the pipeline was purged of air, mostly oxygen, and packed with natural gas.”
UGI has asked the Federal Energy Regulatory Commission to place the line into service January 1.
Although most of its gas is ultimately intended for the power plant, the Sunbury line will also supply UGI’s Central Penn system, which distributes gas to homes and businesses in the region.
Hummel Station is one of three new natural gas power plants being built in Pennsylvania by the Dallas, Texas-based private equity firm, Panda Power Funds. These projects are part of a broader, national trend away from coal, as natural gas takes up an increasing share of electric power generation.