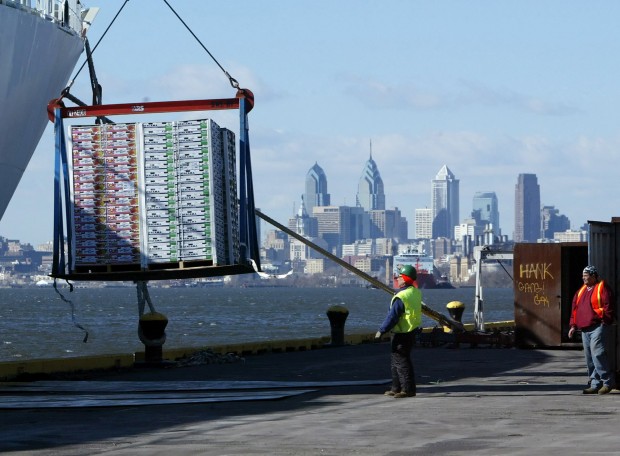 Longshoreman unload fruit from a container ship, Friday, Feb. 24, 2006, at the Tioga Marine Terminal in Philadelphia.

Boosters of the Port of Philadelphia gathered Wednesday to celebrate a big Christmas present from Governor Tom Wolf: $300 million.
Jerry Sweeney, chair of the Philadelphia Regional Port Authority, called the room full of politicians, business leaders and union workers to order. Behind him was a large Christmas tree, decorated with twinkling white lights, red ornaments and bows and of course, beautifully wrapped presents underneath.
Sitting at his left was Wolf.
Last month, two days before Thanksgiving turkeys hit the tables, Wolf announced the multi-million dollar capital investment plan for the port.
And now, Sweeney and other officials were giving him his due.
“This investment will create the infrastructure that will result in 2,000 direct jobs, 7,000 more indirect jobs, more construction jobs, will more than double our container capacity and establish our position as one of the leading international seaports on the East Coast,” Sweeney said. “And how great is that?”
This big investment of taxpayer money – which will come from a bond – is actually plan B.

Plan A was for the Philadelphia Regional Port Authority or PRPA to find a private company to develop a large swath of land along the Delaware River called “Southport.” Environmentalists worried that would involve fossil fuels, and staged several protests. But by November, all but one bidder had dropped out.
Now, the state is opting to revitalize the entire port instead. Wolf hopes it will make Philadelphia more competitive at a time when competition among East Coast ports is fierce now that the Panama Canal has been expanded, allowing giant ships to bring goods from Asia.
“This is going to work because private sector shipping firms choose Philadelphia over other ports, and they’re not going to choose Philadelphia if we don’t have the facilities that we feel they need to make their decisions,” Wolf said. “Otherwise, they’re going to go to Baltimore or other ports.”
Port officials say the timing couldn’t be better, either.
Another multi-million dollar effort, deepening the Delaware River’s shipping channel by five feet, is in its final stages. This new investment will help port operators capitalize on that.
“We’re deepening the shipping channel, so we’re going to bring in larger ships,” said the PRPA’s government affairs director, Don Brennan. “Obviously, those ships are going to have much more cargo. We gotta be ready on the land side. Our piers have to be upgraded.”
The lion’s share of the $300 million in state money is expected to go to the Packer Avenue Marine Terminal, the city’s largest, to help buy new cranes and make other infrastructure improvements so it can handle these larger vessels.
“This is a big investment party,” Brennan said. “There’ll be a bigger party when the dredging’s finished and that’ll be probably the end of next year.”
Environmentalists also showed up to the “big investment party” to take some credit for this new plan for the port of Philadelphia.
A coalition of environmental groups called “Green Justice Philly” spent the past year pressuring Governor Wolf and the PRPA to reject a proposal from the East Coast’s largest oil refinery to build an import-export terminal at Southport. It was seen as part of a larger plan to turn the city into a fossil fuel “energy hub.”
The refinery, Philadelphia Energy Solutions was among the Southport bidders who dropped out. Then, earlier this month, refinery CEO and “energy hub” architect, Phil Rinaldi announced his retirement.
So environmentalists like Tracey Carluccio of the Delaware Riverkeeper Network have been celebrating. Her group was also a major opponent of dredging the river, fearing it would hurt aquatic life and water quality.
As the dredging project nears completion next year, Carluccio says she is still against it, but counts this new investment in the port as a victory.
“We see the development of family-supporting jobs to be paramount and the development of fossil fuels, which provide very few jobs and also degrade our environment… and lower the quality of the Delaware River to be totally unacceptable,” she said.
The new upgrades at the Port of Philadelphia will get started early next year.
Correction: The original version of this article incorrectly stated that environmentalists had not been invited to the PRPA event. A representative from Green Justice Philly was invited to attend.