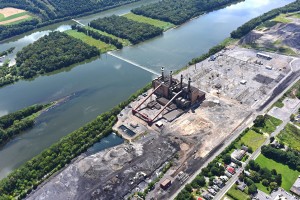 An aerial shot of the former Sunbury coal plant. A new natural gas powered plant will be constructed to replace the shuttered facility along the Susquehanna river.

A private equity firm has announced financing for a new natural gas power plant in central Pennsylvania’s Snyder County, along the west bank of the Susquehanna river. Panda Power, a Texas company, says Goldman Sachs, ICBC, and Investec have invested $710 million, while Siemens Financial Services will provide $125 million in equity to build the new power plant at the site of the former Sunbury coal plant in Shamokin Dam, Pa. The entire project will likely cost about $1.1 billion. Bechtel and Siemens Energy were selected to build the 1,124 MW plant, which the company says is one of the largest coal-to-gas conversions in the nation. It will use Marcellus Shale gas to generate enough power for about 1 million homes, or its equivalent.

The coal plant closed in 2014, after operating for 65 years. Like many coal plants across the country it was a victim of lower natural gas prices, combined with new federal limits on air pollutants. The Sunbury coal plant generated 400 megawatts of electricity, less than half of what the new plant is expected to produce.

“The natural gas revolution has arrived in the heart of coal country,” said Todd W. Carter, president and senior partner of Panda Power Funds, in a release. “I’m proud Panda is leading the way toward clean natural gas-fueled generation. We’re ready to take what we’ve learned in Pennsylvania and apply it to other coal-fired projects across the nation.”

Panda says the new plant, which will be named the Panda Hummel Station, will provide 900 construction jobs over the course of two and a half years, while the plant itself will generate about 35 longterm jobs.

Marcellus Shale gas will travel to the plant through a newly planned 20-inch diameter, 35-mile long pipeline, which will connect the generating station to the larger Marc 1 and Transco lines. The plant will provide much of its power to the New York City market since it’s connected to the major interstate 500 kV Susquehanna-Roseland transmission line.

In a statement, Panda Power says the new plant will bring environmental benefits to the power grid.

While the new power station will supply 180 percent more power than the coal plant it replaces, SO2 and NOX emissions will be reduced by more than 90 percent. The Panda Hummel generating station will also help preserve Pennsylvania’s fresh water resources by using 97 percent less water for cooling purposes than the retired coal-fired Sunbury plant.

That’s good news for nearby residents, said Joe Minott from the Clean Air Council. But he says he can’t get too excited by any new fossil fuel generated power plants.

“If they were saying they were replacing it with a wind farm or a solar farm, I would be really enthusiastic,” said Minott. “But this is more of an economic decision than an environmental decision.”

Minott says while natural gas plants burn cleaner, putting out less sulfur dioxides, nitrous oxides and carbon dioxide than coal, gas still contributes to climate change through CO2 emissions at the power plant and methane leaks throughout production and transportation. The EPA has enacted rules to limit methane leaks, and activists are also pushing Pennsylvania Gov. Tom Wolf to do the same.

Panda Power is in the middle of constructing two natural gas plants in Bradford and Lycoming counties. NRG Energy has also applied for permits to convert coal plants in western Pennsylvania to natural gas burning plants.