Group seeks to restrict the use of eminent domain 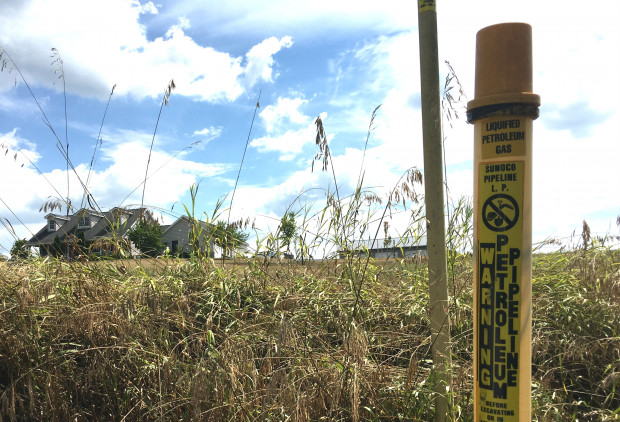 A marker for a natural gas liquids pipeline in Cumberland County.

A newly-formed citizens’ coalition is pushing to change the way eminent domain is applied in Pennsylvania.
The group, called Protect Our Pennsylvania, held a rally at the State Capitol Tuesday. Their primary focus is limiting the seizure of private property for pipeline projects. The group’s spokesman, Eric Friedman, cites Sunoco Logistic’s proposed Mariner East 2 project, which is designed to move natural gas liquids from western Pennsylvania to an export terminal near Philadelphia. Friedman says it threatens his own property in Delaware County.
“That pipeline is intended primarily for export purposes, to send Pennsylvania natural resources overseas,” he says. “That is clearly not a public use. I think the public use test should be strictly and narrowly construed.”
At the federal level, approved interstate pipelines are given authorization by the Federal Energy Regulatory Commission to use eminent domain.
Recent state court rulings have differed on eminent domain issues. In July, Pennsylvania’s Commonwealth Court sided with Sunoco and found its Mariner East 2 line was a public utility, regulated by the Pennsylvania Public Utility Commission, and can therefore use eminent domain. Sunoco has said it always prefers negotiation over litigation and seeks to work with landowners to reach agreements. A separate state Supreme Court decision in September struck down several industry-friendly sections of Pennsylvania’s oil and gas law, known as Act 13.  One provision deemed unconstitutional allowed companies to use eminent domain for natural gas storage facilities.
“Act 13 has now been taken apart piece by piece in Supreme Court decisions,” says Friedman. “It’s a law that should have never been passed.”
The group is not promoting a specific piece of legislation at the moment but has begun discussions with several lawmakers sympathetic to its cause.