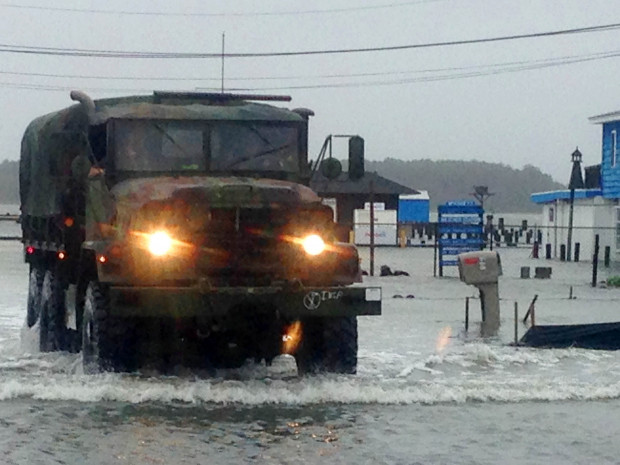 Police patrol flooded streets in a military vehicle in Dewey Beach, Del., on Saturday, Oct. 3, 2015. Tidal flooding from a nor'easter made driving a challenge in the storm-battered resort town of Ocean City, Maryland.

It no longer takes a bad storm to cause floods in towns up and down the Delaware River, as well as the Jersey Shore. Rising sea levels are making high tides even higher, creating what some refer to as “sunny day floods.” And its human-caused climate change that is behind them, according to a new report from researchers at Climate Central. The research organization looked at 27 tidal gauges across the country along the Atlantic, Pacific and Gulf Coasts, and found that 76 percent of flood days that occurred between 2005-2014 would not have happened without the impacts of climate change. The report bases its figures on 6 inches of sea level rise, as well as work published this year in the Proceedings of the National Academy of Sciences that quantified the amount of sea level rise attributed to climate change.
In Philadelphia, 83 out of 120 flood days during those 10 years were due to higher sea levels, according to the report. In Atlantic City, it was 162 out of 229, and in Lewes, Delaware, that number was 143 out of 214. Ben Strauss, vice president for sea level and climate impacts at Climate Central says the research results surprised him.
“I did not expect that that so little sea level rise could cause that much a high fraction of our coastal floods,” said Strauss. “And it really underscores for me that we are really just inches into a problem that’s going to be measured in feet.”
Strauss says he was “shocked” that more than 3 out of 4 floods in the ten year period were caused by humans.
“So it’s a completely new way of thinking of floods,” he said.
The Delaware River is tidal up to Trenton, rising and falling twice a day.  This week, those tides may rise a foot higher than normal. A “King tide” occurs when the Earth reaches its closest annual point to the sun, while at the same time, the moon reaches its closest monthly point to the earth. With all these celestial bodies cozying up to one another, the oceans respond with unusually high, and low, tides. Those high tides can cause flooding, even on sunny days.
“Normally, when we have a King tide like this week, or we have a minor storm, and there’s water in the street, we say it was the tide, or it was the storm,” said Strauss. “But our analysis shows that without that half a foot of sea level rise, the water would not have caused a problem. It would not have exceded the flood threshold established by the National Weather Service.”
That water, of course, gets on roads, and degrades infrastructure.