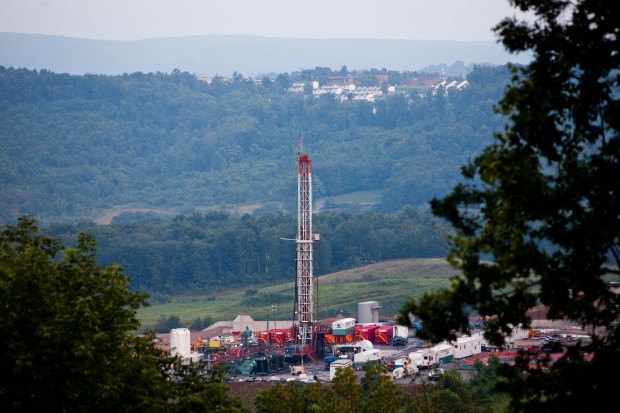 The Supreme Court struck down a number of provisions in the law governing the state's oil and gas industry.

In a win for environmentalists and municipalities, the Pennsylvania Supreme Court has struck down  a number of provisions to the state’s oil and gas law. At issue were several items related to the 2013 Supreme Court decision in Robinson v. Commonwealth, the controversial and wide ranging environmental ruling that eliminated parts of the state’s revised oil and gas law, known as Act 13. On Wednesday, a majority of the court ruled that the “doctor gag rule,” eminent domain for natural gas storage facilities, and the exclusion of private wells from notification of hazardous spills is unconstitutional.
The industry no longer has a fast track to commonwealth court when it comes to challenging local zoning ordinances. And the Pennsylvania Public Utility Commission will have no role in examining local zoning decisions.
Jordan Yeager, the attorney who argued for the towns and environmental groups involved in the challenging the law, said it’s a big win.
“It’s great,” he said. “And it’s great for the residents of Pennsylvania to have the courts recognize that their rights matter more than the gas industry’s power in Harrisburg.”
Yeager said the court’s 88-page opinion repeatedly stressed the original law had serious flaws.
“It’s a great vindication for citizen’s constitutional rights,” he said. “The court said throughout the opinion, that Act 13 and these provisions were a special law that simply benefited the gas industry.
The gas industry was not as effusive about the decision.
“We’re disappointed in aspects of the court’s ruling,” said the Marcellus Shale Coalition president David Spigelmyer in a statement. “[It] will make investing and growing jobs in the Commonwealth more — not less — difficult without realizing any environmental or public safety benefits. Despite this ruling, our industry remains deeply committed to adhering to the high bar set by Act 13, a common sense bipartisan law that modernized our oil and natural gas regulatory framework and serves as a national model for other states.”
Former Gov. Tom Corbett signed the new law back in February, 2012, and it was soon challenged by local towns wanting to maintain control over where fracking for natural gas could take place. In December, 2013, the Supreme Court ruled in a plurality decision that portions of the law, including one that restricted local zoning rights, was unconstitutional. Much of the decision was based on the state’s environmental rights amendment. But the court also sent some challenges back to the lower courts, and those issues have been working their way back to the Supreme Court.
By striking down the local zoning restrictions in 2013, issues over the role of the Public Utility Commission remained because the original law made the PUC the decider on whether local zoning rules violated Act 13. The PUC will have no such role.
Pennsylvania’s new law was also supposed to make things easier for doctors and patients seeking hazardous material information in case of exposure. The law requires drillers to list the chemicals used to produce oil or gas on a public website that doctors could access.
But the website is not required to list all the chemicals used; it leaves off those considered to be trade secrets. These are ingredients that a company says it has to keep secret in order to maintain an edge over its competitors. Doctors could only get the trade secret chemical names and information if they signed a confidentiality agreement and agreed not to share that information. That caused an uproar in the healthcare community and one doctor filed suit.
Wednesday’s ruling eliminates the required non-disclosure agreement. The court reasoned that because this type of requirement only applied to the gas industry, it was unconstitutional. This could mean the healthcare community would now have no option for gaining that information. But in briefs filed by the plaintiffs, they explain that other state and federal statutes would grant them access to the trade secrets in cases of exposure.
Act 13 requires the Department of Environmental Protection to notify operators of public water supplies in the event of a nearby spill related to gas drilling. But the law left out notification to private well owners, which provides water to about 3 million residents of the state, many of whom live in shale drilling areas. The court ordered the legislature to fix this part of the law, and require notification to private well owners.
The court also struck down the use of eminent domain in the case of natural gas storage facilities, which are located underground. The court said that while some portion of storage may benefit the public, it was primarily beneficial to business interests.
John Dernbach, an environmental law professor at Widener University, called the ruling a “home run” for citizens of Pennsylvania.
“The citizens did a lot better in this case than I thought they would,” he said. “Everything the citizens sought to be declared unconstitutional, was declared unconstitutional.”
The governor’s office and the Public Utility Commission say they’re still reviewing the decision.