FILE - In this Aug. 3, 2007, file photo, psilocybin mushrooms are seen in a grow room at the Procare farm in Hazerswoude, central Netherlands. (AP Photo/Peter Dejong)

Oklahoma researchers could soon study psychedelic mushrooms’ effect on mental health. The lawmakers behind the push hope it will help veterans.

Psilocybin research has gained momentum around the globe, as the compound begins to lose some of its stigma. After other conservative states passed laws allowing trials, Oklahoma lawmakers began working to adopt the policies here.

Before Jesse was deployed, he got a word of advice.

“When I went to Afghanistan, one of our guys who had deployed several times — he said something to us,” he said. “He goes, ‘Guys, I’m going to tell you right now before we get in there. It’s easy to go to war. The hard part’s coming home. Because when you go to war, someone’s trying to kill you. So you can learn anything and everything to stay alive. But when you come home, that’s not happening anymore.”

That was back in 2011. Jesse is now one of the millions of Americans — and thousands of Oklahomans — who have returned stateside with post-traumatic stress disorder. He spent years struggling with symptoms.

So this is a bit of an oversimplification, but post-traumatic stress can manifest in many ways. Here’s one major example. Say the person has an experience where they’re unsafe — in one of Jesse’s many cases — riding over an explosive device that detonates. The mind and body do what they have to to survive and get away. But years later, even though the person consciously knows they’re safe now, the mind and body can’t let it go. They’re in constant survival mode, sending out an ever-present signal to assess threats. That can lead to a symptom called hypervigilance.

Jesse says one of the first things that ever got that hypervigilance to turn off was psilocybin — the psychoactive compound in psychedelic mushrooms. Because mushrooms are still illegal, we aren’t using Jesse’s last name.

State lawmakers are working to make that experience more attainable — and legal — for Oklahomans. A bill making its way through the statehouse would allow universities and research institutions in the state to conduct psilocybin medical trials. The legislation covers several mental health conditions, but the lawmakers pitching it are focusing on PTSD, especially among veterans. Representative Logan Phillips presented the bill to the House Public Health Committee. He — like Jesse — is an army veteran. 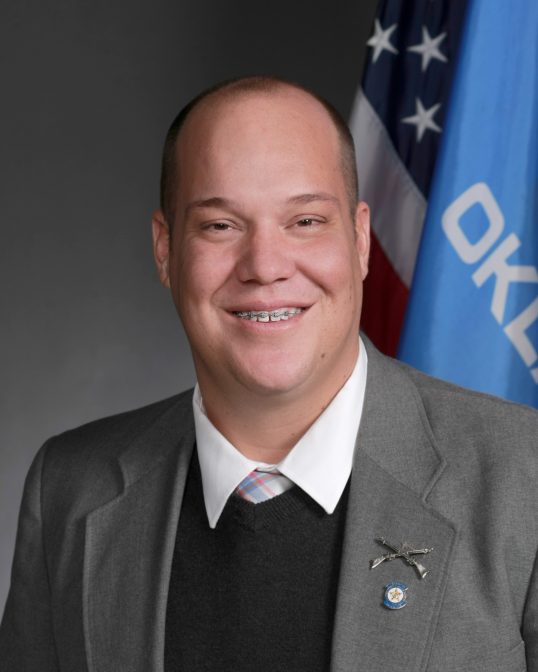 He told committee members as much during the bill’s committee hearing, where it passed last month.

Phillips has had a first-hand look into the mental health crisis veterans are facing, which is clear to see in Oklahoma. The state is consistently in the top ten for highest number of veterans per capita. The latest data from the Department of Veterans Affairs shows Oklahoma’s veteran suicide rates are ‘significantly higher’ than the country’s as a whole — about 40 per 100,000 here versus 32 per 100,000 nationally. That suicide rate among the state’s veterans is also higher than Oklahoma’s rate of suicide in the general population, which is about 26 per 100,000.

Phillips had heard that psychedelics such as psilocybin could aid in treating the kind of PTSD and depression symptoms that could lead to suicide. His approach wasn’t quite as hands on as Jesse’s.

“Me, I was an academic,” he said. “My background is I’m a college professor, so I started doing research.”

He’s not the only one.

Trials outside of Oklahoma

COMPASS, a mental health care and research company based in London, has been conducting studies into psilocybin’s effects on treatment-resistant depression. The organization’s chief medical officer is Dr. Guy Goodwin, who previously served as the head of the psychiatry department at Oxford University. He talked with StateImpact about what a typical session looks like.

“It’s not really like therapy as people usually understand it, where the therapist may listen and make interpretations and steer the patient,” Goodwin said. “It’s really the patient that does all the work, and it’s a kind of accelerated emotional learning, which seems, as I say, for about 25 percent of people to have really quite a dramatic effect on their state of mind — their depression, in the case of treatment resistant depression.”

Both the therapist and the patient begin that work well before a session ever takes place. More than 90 percent of trial participants hadn’t used psychedelics before. The experience is obviously an aberration from the norm. Goodwin says much of the work is finding a medical professional the patient feels comfortable with, who has had experience with psychedelics and can help the patient understand what they’re seeing and feel safe.

Goodwin said this isn’t a new concept. The United States and other countries were studying the medication in throughout the 1940s, 1950s, and 1960s.

“It was only when it was taken up and made recreational and associated with the counterculture that it became politically toxic,” he said.

The United States banned it first, and because of legal agreements and other policy issues, most other countries did as well.

But the tides are turning in terms of policy and in terms of public opinion, he said. Popular culture has shifted with the popularity of books such as Michael Pollan’s “How To Change Your Mind” and “Your Mind On Plants.”

In the United States, one of the most well known institutions studying the medications has been Johns Hopkins Medical School. Dr. Roland Griffiths has spent decades studying psilocybin and other compounds, and during that time became the founding Director of the Johns Hopkins Center on Psychedelic and Consciousness Research. He gave a TED Talk on the subject back in 2015, about the center’s findings on psychedelic therapy and its effect on tobacco cessation and depression among terminal cancer patients.

Psychedelics have been decriminalized or legalized in several cities across the United States, including Denver, Washington D.C. and Oakland. Oregon was the first state to do so, and California could be next.

Rep. Daniel Pae, R-Lawton, is the principal House author on the measure. His district is home to many veterans and active military servicemembers, given its proximity to Fort Sill. Pae said that he has spent much of his four-year tenure in the Legislature working with constituents and colleagues on veteran mental health policy.

That includes following legislative news in other states. Texas legalized medical trials for psilocybin in 2021.

“So, I thought it was very interesting that a state as conservative as Texas would be able to pass this type of bill,” Pae said. “And I look more into it, and you know, Rick Perry, former governor Rick Perry was one of its biggest proponents.” 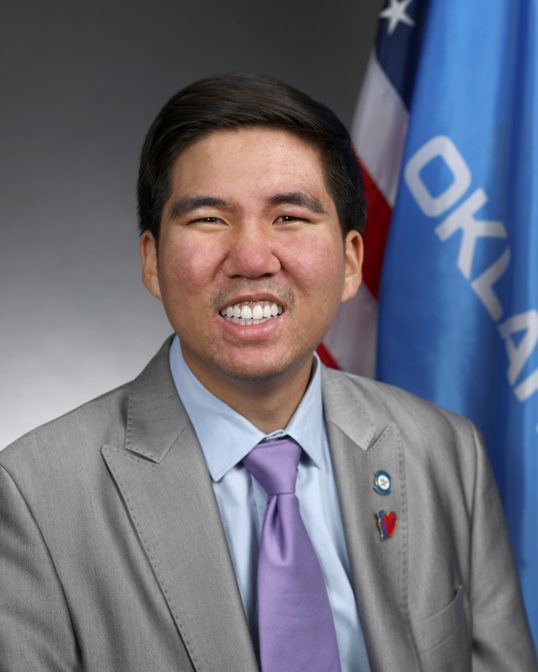 He later saw a slew of other conservative states — Utah, Kansas, Missouri and Florida, to name a few — are also looking into similar policy. That being said, he and the rest of the lawmakers supporting the legislation knew it wouldn’t be a quick and easy sell.

“We knew from the beginning that it would require a lot of careful time and messaging,” Pae said.

First up, dispelling myths. In the bill’s committee hearing, some lawmakers raised concerns about the bill creating a large commercial industry. The legislation wouldn’t decriminalize the mushrooms or psilocybin products for all Oklahomans. It would allow universities and research centers access to a small inventory for use in medical trials. Several compared psilocybin mushrooms to marijuana. They don’t have much chemical overlap and are used for different purposes.

Another is stigma. Inside the Legislature and out, some used the measure as a punchline; the term “magic mushrooms,” which Pae says he intentionally shies away from, can conjure images of Height Ashbury and Grateful Dead concerts. Phillips said that his response to those concerns is evidence.

“The reality and the truth of this is that it works,” he said. “And so when presented with evidence that this is a treatment option, it’s hard … to just think of it as 1960s hippies. This is an option for treatments. We have the research, we have our academic universities that want to get involved. You just shine the light on what it can do and people will see the value.”

This whole thing might sound familiar. Oklahoma lawmakers just spent years working to legalize needle exchange programs in the state. Rep. Carol Bush, R-Tulsa, was one of its main supporters. In an interview with StateImpact Oklahoma last year, she said that the policy struggled with a perception problem.

Instead of relying on the typical talking points advocates in more progressive areas might use, she and other supporters framed it as a public safety issue. They used data from the Oklahoma Healthy Minds Initiative that showed one in three of the state’s law enforcement officers will undergo a dirty needle stick in the field at some time in their careers, and one in four will undergo more than one.

Pae was one of the lawmakers advocating for that bill, too.

Pae, Phillips, Bush, one of the other members on the bill, Sen. John Michael Montgomery  — they’re all Republicans. A central part of the party’s identity for decades was being hard on crime. When asked, Pae said Republicans don’t have to be so rigid.

“First, you know, I don’t really consider it a choice between being soft on crime or tough on crime,” he said. “I believe a third, valid option is being smart on crime. That’s — speaking broadly — when it comes to criminal justice reform, and destigmatizing the notion that, you know, drugs are bad, period without any nuance whatsoever.”

The shift toward smart-on-crime Republicanism is not new. Several of Gov. Mary Fallin’s final State of the State addresses focused on criminal justice reform and lowering the state’s ranking as first in the nation for incarceration. Oklahomans passed State Question 780, which dropped simple possession of illegal drugs from a felony down to a misdemeanor, in 2016.

But the shift has continued to evolve. The needle exchange bill passed out of both chambers and garnered the Gov. Kevin Stitt’s signature last year. So far, HB 3414 has already passed off the House floor, with high-ranking members such as Majority Leader Jon Echols signing onto it.