A Zoom meeting of Oklahoma's State Board of Education from earlier this year.

Board talks about issues in 10-hour meeting board addressing masking, Epic

Oklahoma’s State Board of Education again passed a motion further encouraging but not requiring school districts to mandate masks in their classrooms.

Citing an explosion of cases of COVID-19 in recent weeks, board members passed the resolution that begs school boards and superintendents to implement mask mandates.

During the meeting, members acknowledged masking is an effective way to limit the spread.

But, a majority continued to say any decisions about masking need to be made at the local level.

“We do need everyone in this state to take this incredibly seriously,” board member Jennifer Monies said. “And we trust that local communities know to do what’s best for their kids and their districts so I appreciate what we’re doing here today.”

In July, the board voted 4-3 to reject a thorough plan for reopening – developed by the State Department of Education and Health staff – and turn it into simply a recommendation.

But that never meant schools should not take actions like mandating masks themselves, she said.

“There’s frankly been a misunderstanding of what this board did back in July,” Monies said. “All along we have highly recommended that A. local districts take COVID-19 incredibly seriously and then B. utilize their best judgement knowing their local communities.”

Nothing the board has done, she and other members argued, downplayed the seriousness of the pandemic.

“I struggle with the purpose of this resolution… if it doesn’t require action,” she said.

State schools superintendent Joy Hofmeister said it’s “no secret” that she’d prefer a masking mandate in all school districts. However, this was the best option if a majority of board members won’t vote for one.

“The state board of education implores Oklahoma school boards and district superintendents to require students and staff to wear facemasks on public school campuses, within district vehicles and especially in classrooms or at other large gatherings,” she said.

Members appear to have the support of Gov. Kevin Stitt and other state officials who continue to refuse to implement a masking mandate despite repeated recommendations from the White House Coronavirus task force.

Doctors and teachers have been calling for a mask mandate in schools since they started in person learning in August.

Oklahoma Education Association President Alicia Priest again panned the move in a statement sent out during the meeting.

“This is a complete lack of leadership with potentially grave consequences for our students, educators, support professionals and communities,” Priest said in a written statement. 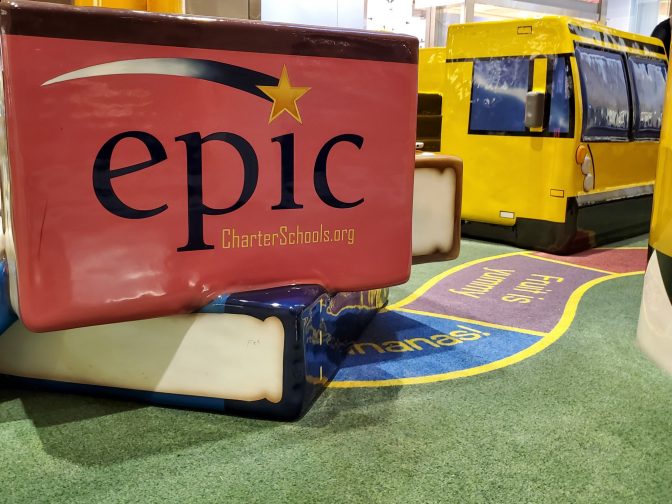 An Epic advertisement at an Oklahoma City mall.

These problems are unrelated to those in the explosive audit report released last month.

Board member Estela Hernandez questioned the timing of the report.

“Why did the previous board not address this?” She said.

Hofmeister said the department and the board of the past has been investigating these issues for years.

“This has been an ongoing pursuit,” Hofmeister said.

She and the state department recommended putting Epic on accreditation probation. But board members demurred.

Ultimately, they declined not to take any action against Epic.

Epic’s school board chairman Doug Scott said he would work hard along with Hickman and school officials to fix issues before the state board’s next meeting.

It appears that spring assessment tests are likely, though they could be delayed again like they were last spring.

US Secretary of Education Betsy Devos had said that tests would be happening. But it’s unknown what President-elect Joe Biden’s administration might do about spring testing.

State board members want schools to be prepped regardless, and they extended the testing window by four weeks.

“We are making plans today to simply a safer environment should this still go forward,” Hofmeister said. “It’s important that we still do those planning steps today.”

The board met for more than 10 hours and took several other actions.

The board will seek an Attorney General’s opinion about rules for schools to participate in Lindsey Nicole Henry Scholarships. Currently, the rules say private schools that receive students on the scholarships must follow non-discrimination laws in hiring staff. There was some consternation among members that it might prevent religious schools from hiring only staff members who follow the school’s religion.

The board put Sovereign Community School – a charter school in Oklahoma City focused on Native American culture and identity – on probation. The school has struggled maintaining enrollment, reporting its financials to state officials and staying financially viable.