Sovereign Community School Is Part of a Larger Movement 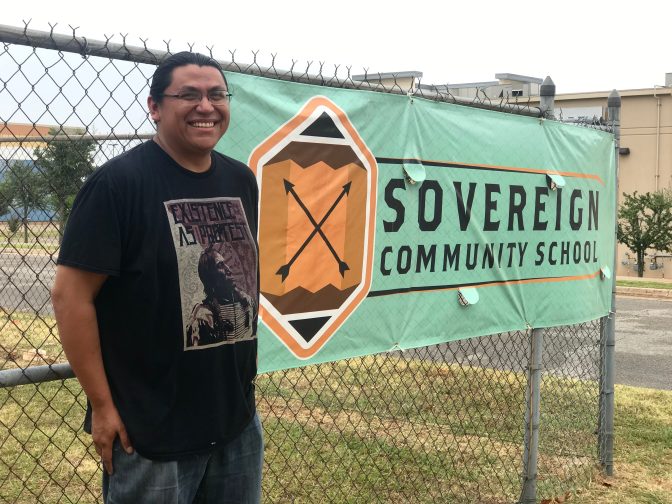 Sovereign Community School is new charter school in Oklahoma City with a focus on Native American culture and identity. It’s also part of a movement of tribes and tribal citizens using publicly funded, privately run schools to take control over how their children are educated.

Phil Gover is the founder of Sovereign Community School. He belongs to the Pauite, Pawnee and Comanche Nations, and he started developing the school in 2017 after visiting a charter school in New Mexico called the Native American Community Academy.

The weeks leading up to Sovereign’s opening on Aug. 26 were hectic. Building issues delayed the start of school twice, making it difficult to recruit students. Still, some parents have gone to great lengths to send their children to this school. 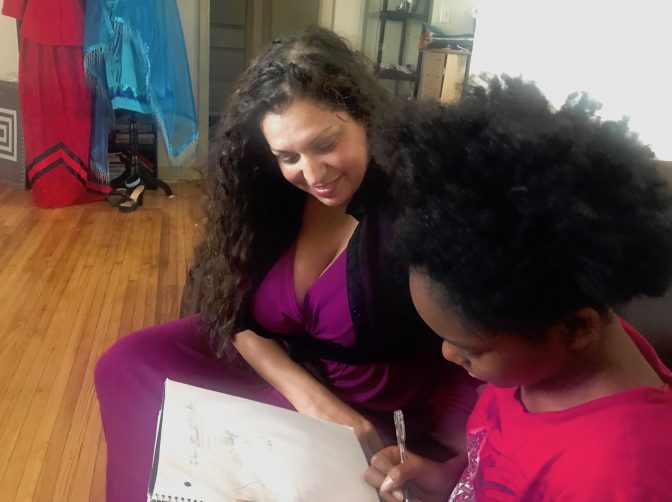 Summer Wesley sits with her 11-year-old daughter, who will attend Sovereign Community School this year.

Summer Wesley relocated her family of six so that her 11-year-old daughter could attend Sovereign this year.

“I was raised as ‘You’re Choctaw first. You’re always Choctaw,’ and that’s where you’re solid and where you’re grounded,” Wesley said.

She wants that same foundation for her daughter, but Wesley says it’s often eroded at traditional public schools. Sometimes, she says it’s because of bullying, but, more often, it’s the general environment.

“The dominant culture is considered the default, and so a lot of the things that we do are relegated as inferior,” Wesley explained. “At Sovereign she’s going to have not only people who look like her, but people who are from similar backgrounds as her.”

Any child can attend Sovereign Community School, but most of the student body is Native. Wesley’s daughter is one of 61 students representing at least 18 tribes enrolled so far.

The United States has a history of using public education to try to erase Indigenous cultures. Up until the civil rights movement, tens of thousands of Native children were sequestered at federally-run boarding schools with a single goal: assimilation.

For many of Sovereign Community School’s staff, that history is a powerful motivator. Teacher Kendra Wilson-Clements is Choctaw, and she says her grandfather was taken from his family in the early 1900s.

“He attended what was called then the Goodland Indian Orphanage in southeast Oklahoma for about 10 years,” Wilson-Clements said.

Her grandfather rarely spoke about his experience, but Wilson-Clements witnessed the effects. He lost much of his native language and struggled with alcoholism and depression as an adult.

“I feel his presence more and more since I have stepped into Sovereign,“ Wilson-Clements said. “It is honoring to my grandfather to educate our kids in the way that they deserve to be educated.”

The boarding school era is over, but Gover argues public education still isn’t designed with Indigenous people in mind.

At Sovereign Community School, Native cultures and histories will be woven into everything, from how it looks to the curriculum.

Gover is adapting some subjects, like literature, from the Native American Community School, where students read books by Indigenous authors. Other subjects, like environmental science, will be infused with Indigenous knowledge to make it culturally relevant. Sovereign students will also take a wellness class that uses the medicine wheel, which is used commonly throughout Indigenous cultures in North America, to teach concepts related to personal and community health.

Gover’s team is also creating a language program from scratch. Students will take a few years of general linguistics before studying their own respective languages. In order to make it happen, he is trying to build a language library with help from local tribes.

The number of charter schools primarily serving Native students has grown steadily since the 1990s. In 2017, the National Alliance for Public Charter Schools counted 46 charter schools in the United States with majority Native students. Their tribal affiliations vary, and some are more focused on Native culture than others. Many are on tribal lands, while some, like Sovereign Community School, serve areas with large Native communities. More are set to open in the near future. 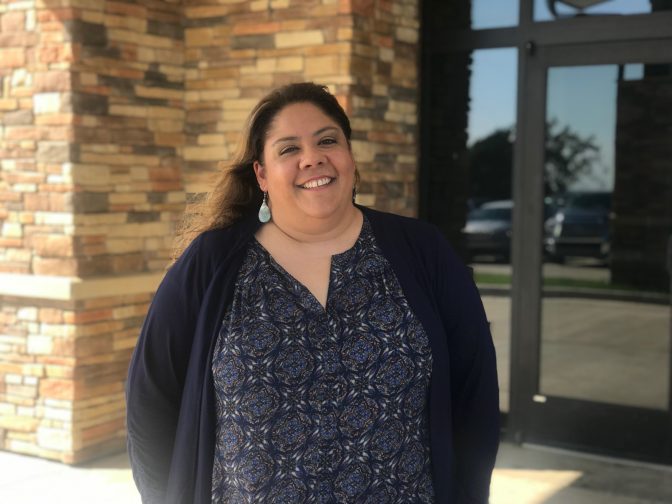 Diana Cournoyer is the executive director of the National Indian Education Association, which was formed to counter Indian assimilation policies in the United States.

“It’s a tool that is very flexible,” said Diana Cournoyer, who directs the National Indian Education Association. “Where we’ve been is the ‘Kill the Indian…Save the man’ mentality,” Cournoyer said. “A lot has changed but not enough, which is why charter schools are a part of the conversation now in Indian country.”

NIEA recently put together a guide designed to encourage “the growth and expansion of Native charter schools throughout the United States.”

“I think it is a movement, and it is spreading nationwide,” said Terri Bissonette. She founded Denver’s American Indian Academy of Denver, which she hopes to open in 2020.

Like Gover, Bissonette took inspiration from the Native American Community Academy in New Mexico. NACA seems to have added new energy to the Native charter movement. The school offers assistance to people who want to replicate its model through the NACA Inspired Schools Network. Both Gover and Bissonette participated in NACA’s fellowship.

Sovereign Community School is Oklahoma’s second Native charter school. Cherokee Nation has been operating a language immersion charter school since 2011. But the state is in a unique position when it comes to these schools. Not only does Oklahoma have the largest Native student population in the nation, it’s one of just two states that allow tribes to directly authorize new charter schools. The Pawnee and Comanche Nations already have plans to open their own charters in the coming years.

According to the National Assessment of Educational Progress, Oklahoma does a better job of educating Native students than other states, but, like other minority groups, they still perform below their white peers. Gover, thinks Native charters can change that, but for him, education is also a matter of survival.

“I think educational sovereignty is the next frontier of tribal sovereignty,” Gover said. “ We survived colonization and modernization and we’re still here. But the only way that I think we can talk about the future, our future as nations, is if we get really serious about how our kids are educated.”

Sovereign Community School’s mission statement says it will “activate the next generation of Indigenous leaders.”