In Tulsa, a National Blueprint for Managing Floods as Cities Grow and Climate Changes 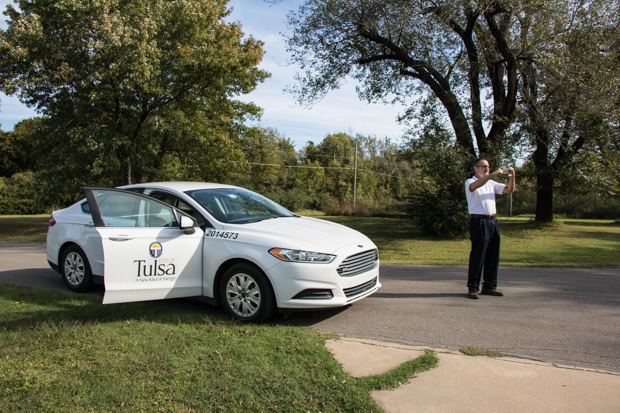 Stormwater engineer Bill Robison snaps a photo of a flood-prone house the city is trying to buy from its homeowner.

In the aftermath of devastating hurricanes in Texas, Florida and Puerto Rico, communities across the U.S. are rethinking ways to control flooding and reduce hazards that could be worsened by urbanization and climate change.

Writing such plans is a complex, politically challenging process, but one city in Oklahoma has emerged as a national model for creating a flood-control program that works.

Bill Robison pulls over and parks his city-issued car on a tree-lined street in east Tulsa.

“That’s the one I haven’t been able to talk to yet,” he says, pointing to a small, single-story home. Robison, the lead engineer for Tulsa’s stormwater program, approaches the home and knocks on the front door. His mission today: Meet the owners and convince them to sell their home to the city.

The house has changed hands a bunch of times in recent years and it has flooded — repeatedly. It’s one of more than 80 houses Robison and the city are currently trying to buy. Over the last three decades, the stormwater program has helped Tulsa clear nearly a thousand buildings from flood-prone areas.

“Typically, after people are flooded two or three times, they’re ready to sell out,” Robison says. 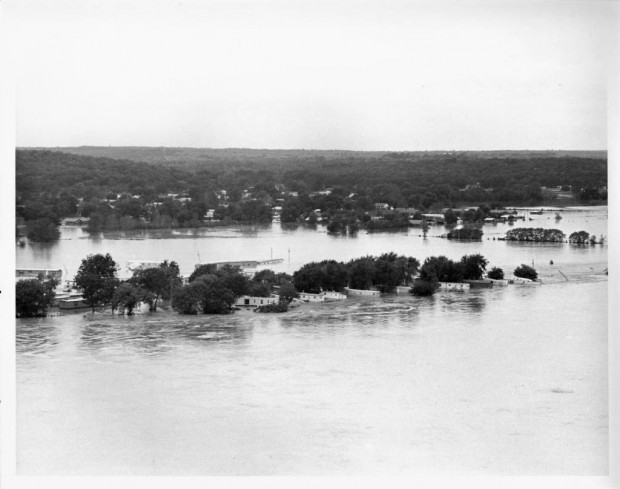 Neighborhoods and mobile home parks in Tulsa after the Arkansas River flooded in October 1986.

Home buyouts are one part of a municipal hazard mitigation plan designed to save lives and save millions of dollars in property losses caused by floods that have historically devastated the city. It’s a comprehensive and aggressive plan other cities might soon copy.

“Everything happens at the local level, and if you don’t have the local people on board you haven’t got a program,” says Ron Flanagan, a consultant and principal planner at Flanagan & Associates who had a lead role in writing the city’s program. “The federal government can’t enforce everything and they have minimum standards.

Tulsa is surprisingly vulnerable to flooding. The southern tip of the city is sliced by the Arkansas River, which swells from local rains and precipitation that flows in from northern and western Oklahoma. Other Tulsa neighborhoods are scattered among a spiderweb of 36 creeks.

Buying out homeowners isn’t the city’s only strategy for managing flood risks. The city started accounting for urban growth in its flood plain calculations and built a network of drainage systems. Flood managers also created green spaces that serve as flood basins. Day-to-day, many of these spaces are used as parks and soccer fields or disguised as neighborhood ponds.

In the 1970s and ’80s, Tulsa was hit by a string of damaging floods, and city leaders started working on a plan for rising waters to break an expensive and hazardous disaster-then-rebuild cycle. This sparked a period of fierce opposition and politicking dubbed the “Great Drainage War,” as activists and city officials squared off with property developers and builders over proposed rules and restrictions.

In 1984, a stalled cold front dumped more than a foot of rain across the city. Fourteen people died and hundreds were injured; more than 5,000 homes and buildings were destroyed or damaged. Flanagan and Robison say the Memorial Day flood galvanized the public and cleared a path for city officials to sign off on more aggressive action. 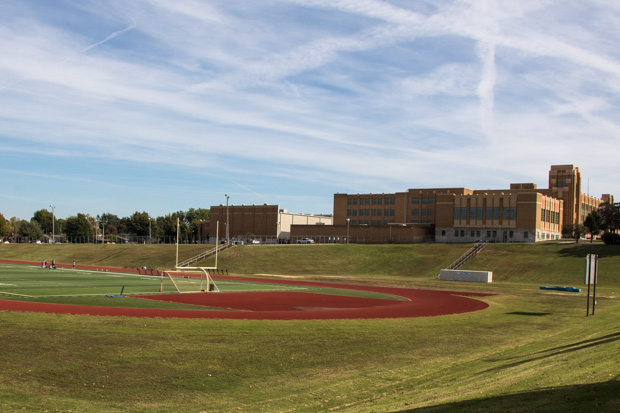 Tulsa's flood-control plan includes multi-use drainage basins, like the athletic field at Will Rogers High School. The field has a football field, track and bleachers and doubles as a detention pond for overflowing stormwater.

Flood-minded construction and property ordinances and zoning requirements add fees and increase costs for builders and developers, which often resist flood planning. To help pay for its program, the city added a stormwater management fee to utility bills, which was — and remains — unpopular with many residents.

Flanagan consulted flood planners in Houston in the past, and says the Texas gulf city’s risks are unique. But, he says, any local government drafting flood-control rules will likely face the same challenges posed by developers and builders.

“Elected officials are very sensitive to the development community’s wants and desires and needs,” he says.

Flanagan says flood-control plans come with unavoidable costs. But he and other flood planners and stormwater managers say the most cost-effective solutions come in the design phase of construction or property development.

“The sooner you address these things the cheaper it is,” he says. “As you keep putting these things off during the development process, it gets exponentially more expensive.”

National groups say Tulsa is a model for how cities can plan for flooding as urban areas grow and climate patterns change. The State Department has even led delegates from countries like Russia and Azerbaijan to Tulsa to see the plan in action.

The strategy has worked: Today, Tulsa’s flooding problems are much smaller. But, Flanagan and Robison both worry the success could make it hard to expand and adapt the plan down the road. They say the longer the city goes without a catastrophic flood, the easier it gets to forget what the planning is for and justify to the public and city officials why the program is worth its share of limited municipal money and resources.