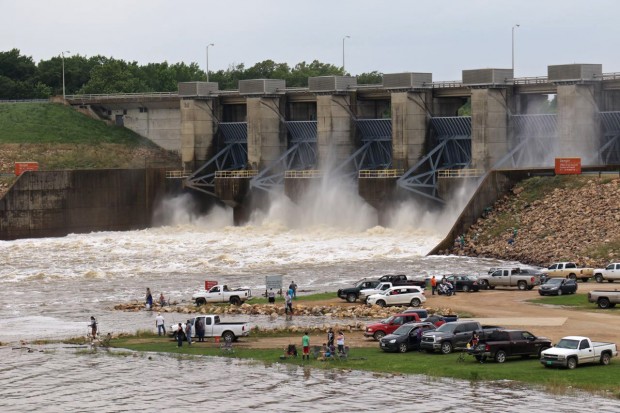 In the struggle to come up with ways to fill Oklahoma’s nearly $900 million budget gap, some have suggested non-standard ideas to raise money — ideas that often die unceremoniously in the legislative process.

One such idea is selling southeast Oklahoma water to Texas. A bill that would have repealed the long-standing ban on out of state water sales didn’t even get a vote in committee earlier this session. Still, former Oklahoma Gov. David Walters is fervently endorsing the sale of water to north Texas, and calling on lawmakers to tackle the “radioactive” issue.

In a commentary piece from NonDoc, Walters, a Democrat who served from 1991-1995, says 30 billion gallons of unused water flows into the Red River each day, and capturing and selling just a small portion of it could end the state’s financial problems and make southeast Oklahoma’s economy boom:

We can flow 500 billion gallons of water to Texas and get paid $1 billion escalating annually for this water. It is a great deal for Texas, and it is a huge new source of funding for Oklahoma. It only takes 5 percent of our excess water that we are currently just throwing away.

…Oklahoma is being dragged through a willful bankruptcy where the ideology of eliminating all taxes and shrinking government prevails over human compassion. Selling water will require new leaders looking for new and renewing resources to help Oklahoma sustain, grow and prosper.

One political roadblock: he idea of selling water to Texas is wildly unpopular in southeast Oklahoma. The two states already fought all the way to the U.S. Supreme Court over Texas’ desire to buy Oklahoma water. Walters acknowledges that during his own administration he walked away from the issue after a backlash from water activists in the area.

I recall one group of women, near Lake Sardis, upset about the possible sale of water to Texas. They donned T-shirts emblazoned with pictures of dead fish and attended a meeting I had in the region. This meeting was a forerunner of the modern-day Tea Party yell-a-thons.

Having about all the controversy that I cared to handle at the time, I asked Secretary of the Environment Eaton to abandon negotiations to sell water to Texas. Thus began a tradition that every political leader in Oklahoma has dutifully followed since, which is to strap on running shoes and spring from this issue.

It’s hard to imagine Walters’ vision of water sales as a panacea for the state’s funding problems coming true. Even moving water from the southeast part of the state to Oklahoma City has been a political nightmare fraught with court battles and local ire.

Just this week, the southeast Oklahoma water advocacy group Oklahomans for Responsible Water Policy filed a protest of Oklahoma City’s permit application to divert water from the Kiamichi River Basin to meet the city’s future water needs. The group says removing water from the basin — for sale or not — would threaten fish and wildlife in the area, depress tourism, and ultimately deplete the water resources of the people who live in southeast Oklahoma.

Tulsa geologist and water advocate Robert Jackman reacted to Walters’ plea to sell water to Texas in an email to StateImpact.