On April 23, 2013, the U.S. Supreme Court heard oral arguments on Tarrant Regional Water District v. Herrmann, a case that has profound implications for Oklahoma’s water resources and could impact interstate water compacts across the country.

On June 13, 2013, the high court sided with Oklahoma in a unanimous decision. The decision hinged on three parts, Justice Sonia Sotomayor wrote in her opinion for the court:

… the well-established principle that States do not easily cede their sovereign powers; the fact that other interstate water compacts have treated cross-border rights explicitly; and the parties’ course of dealing At the center of the debate is the Red River Compact. That’s an agreement among Oklahoma, Texas, Arkansas and Louisiana that divvies up the states’ water rights from the Red River and its tributaries. Texas authorities believe Oklahoma has denied them access to water they have a right to under the compact. Oklahoma officials read the compact differently, and say they have a responsibility to protect Oklahoma’s water supply for the future.

Oklahoma, Texas, Arkansas and Louisiana have been discussing what to do about water for more than 50 years.

In 1955, Congress authorized the four states to draft a compact to assure adequate access to water in the Red River Basin. The compact was signed by the states in 1978, and ratified by Congress in 1980.

The Red River Compact ensures that each state gets an “equitable apportionment of water” from the Red River and its tributaries.

But “equitable” is arguable. Oklahoma and Texas have been fighting about the language of the Red River Compact for more than a decade. That fight has only grown more intense as a devastating drought set in on both sides of the border in the past couple of years. Something else has changed since the compact came into force in 1980. The population of northern Texas boomed, and is projected to continue doing so. North Texas will likely outgrow its water supply by 2060, planners south of the Red River say.

The Tarrant Regional Water District, an authority that provides water to more than 1.7 million people in 11 counties — including the sprawling city of Fort Worth — wants water from Oklahoma. The TRWD expects the population in its service area will more than double by 2060.

From the TRWD’s petition to the Supreme Court:

Tarrant has identified water sources within Oklahoma as the most practical means of addressing both its immediate and longterm needs. Oklahoma has a lot of water. The Sooner State sits in the middle of a large Mississippi River basin where water is funneled from the melting snowpack of the Rocky Mountains in Colorado and flows southeast in the Arkansas River and its tributaries.

A second watershed in the Texas panhandle and western Oklahoma supplies Palo Duro Creek near Amarillo, Texas — the headwaters of the Red River, says officials with the Oklahoma Wate Resources Board.

According to the TRWD, Oklahoma doesn’t use much of what it has. The Sooner State, the TRWD writes in its petition, uses less than 2 million acre-feet of stream water per year. An acre-foot is the volume of water that would cover an acre to a depth of one foot. An Olympic-size swimming pool holds about two acre-feet of water. So by TRWD’s accounting, Oklahoma is using about 1 million pools of water. Which sounds like a lot until you consider how much Oklahoma is not using:

Another 34 million acre-feet of unused water flows out of Oklahoma annually, bound for the Gulf of Mexico.

From the southeast part of Oklahoma alone, more than twelve times the volume of Tarrant’s entire projected 2060 shortfall is discharged, unused, into the Gulf of Mexico each year.

And the drought has been worse to Texas than Oklahoma, the TRWD argues:

Because Oklahoma contains water-rich territory north of the Red River, its share … has not been affected by the recent drought as directly as has Texas’s share.

Bend in the River

Texas has long been thirsty for Oklahoma water, and Texas has tried to get it from the state, its tribes, and private owners.

In 2001, Oklahoma considered selling water to Texas water districts and splitting the profits between the state and the Chickasaw and Choctaw Nations. But that proposal — by then-Gov. Frank Keating — was rebuffed by state legislators.

Since then, a sort of water protectionism has taken hold in Oklahoma. In 2002, Oklahoma legislators enacted a three-year moratorium on out-of-state water sales. In 2004, legislators extended the moratorium through November 2009.

In 2009, the Oklahoma Legislature approved House Bill 1483. This measure requires legislative approval for any permit that would export out-of-state water compacted to Oklahoma. It also requires Oklahoma’s water authority to consider in-state “shortages” before water can be permitted for out-of-state export.

Against this backdrop of Texas growth and Oklahoma protectionism, the TRWD filed applications for three Oklahoma water permits in November 2007. All three permits would appropriate water from tributaries of the Red River — tributaries on the Oklahoma side of the border.

Of the three permits, one to draw water from the Kiamichi River in one subbasin of Southeastern Oklahoma is the most contentious. In this region, the Red River Compact says the four states “shall have equal rights to the use of runoff originating in the subbasin,” so long as sufficient water continues to flow on downstream to Arkansas and Louisiana.

The TRWD wants 310,000 acre-feet of Texas’s share of water from this subbasin. The TRWD proposes to get it by damming the Kiamichi just upstream from the Red River, building a pump station and pipeline and transporting the water from Oklahoma to Texas. The TRWD also wants assurance that Oklahoma will release enough Kiamichi River water from another dam upstream to make its investment worthwhile.

As the TRWD filed the three permit applications, it simultaneously filed a federal lawsuit against the Oklahoma water board. The court battle had begun.

So far, lower courts have sided with Oklahoma, most recently the 10th U.S. Circuit Court of Appeals.

Questions for the Court

The Supreme Court could rule narrowly on the facts of the case, which would limit the decision’s impact to just Oklahoma and Texas. If the court rules more broadly, however, the case could have wide-ranging effects on interstate — and possibly international — water compacts.

There are more than two-dozen interstate compacts governing water allocation in the United States.

The TRWD points out that almost “every major” water source in the western U.S. is governed by an interstate compact that contains the same “boilerplate” language that the 10th Circuit said exempted the Red River Compact from the Constitution’s Commerce Clause.

If the Supreme Court affirms the 10th Circuit Court’s logic, “virtually every state west of the Mississippi” will be authorized to enact “protectionist” water laws that could dismantle such interstate compacts, the TRWD argues.

Many of these compacts — in Arizona, California, Colorado, Nevada, New Mexico, Utah and Wyoming — could be impacted by the decision, Wendell Cox, Pacific Research Institute Fellow argues in a December 2012 column in the Orange County Register:

The water compacts are also important to the expanding oil and natural gas sectors, which have created so many high-paying jobs.

Failure to reverse Tarrant would grant license to states to abrogate their agreements in an increasingly politicized environment.

In court filings, the TRWD argues that water supplies in more than 18 metropolitan areas could be impacted by the Supreme Court decision, the Fort Worth Star-Telegram reports:

Attorneys in Michigan say the ruling could jeopardize the Great Lakes Compact, and there are questions whether it could impact Alabama, Florida and Georgia’s tri-state “water war.”

The Supreme Court decision could impact agreements between the U.S. and Canada that pertain to the Great Lakes, Draper tells StateImpact.

Climate change and drought is making many water authorities rethink their long-term water needs. Many protectionist measures — like the laws Oklahoma passed — speak to issues of sovereignty, Draper says.

And the outcomes of the sovereignty battles at the state and federal level could spill over into international water-sharing agreements, he writes in a 2012 policy paper: 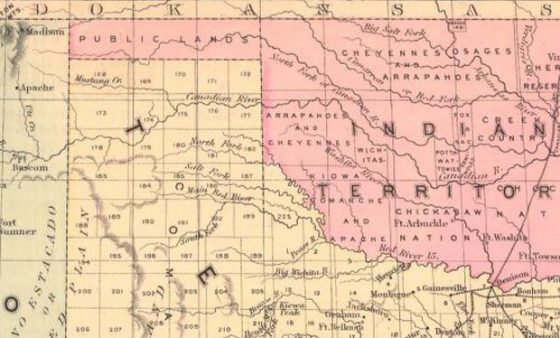 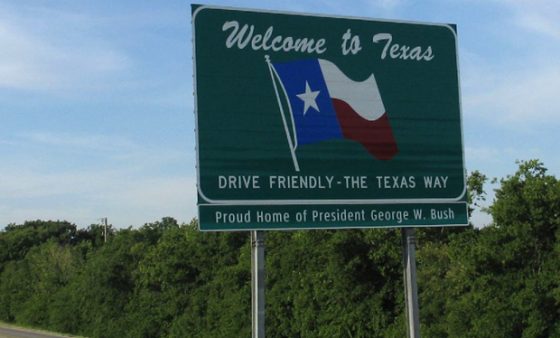 Exactly where the border between Oklahoma and Texas lies along the Red River has never been completely clear. 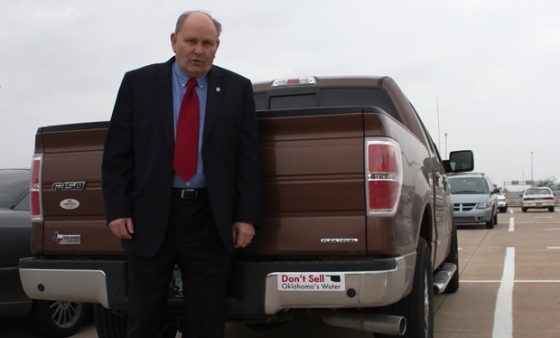 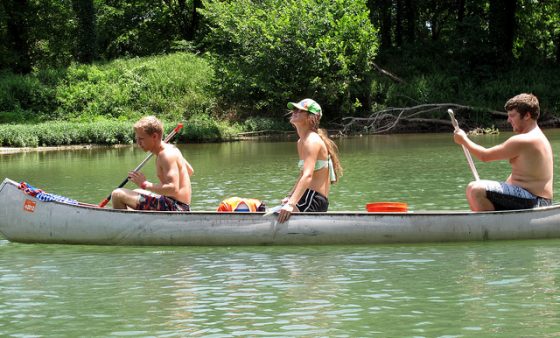 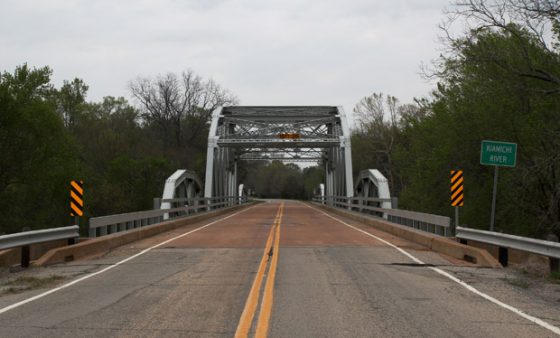 Inside the Arguments in Oklahoma’s Supreme Court Water Case