Rep. Leslie Osborn On GRDA: Should We Be In The Electric Utility Business? 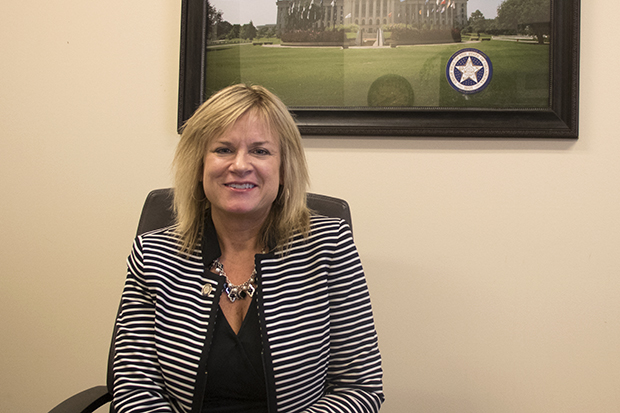 State Representative Leslie Osborn is the new chair of the powerful House Appropriations and Budget Committee, an influential position that gives her bills extra weight. StateImpact talked to Osborn about legislation she’s pushing to increase mining fees, and to explore the sale of the Grand River Dam Authority.

GRDA in the crosshairs

The GRDA is a state-owned electric utility that provides power to northeast Oklahoma from hydroelectric dams, coal and natural gas plants. But GRDA also has important water quality monitoring, recreation and law enforcement responsibilities. Last year it took control of Oklahoma’s network of environmentally sensitive scenic rivers after the agency that used to protect them was eliminated due to budget cuts.

This year, as the state faces an estimated $870 million budget shortfall, State Rep. Leslie Osborn, R-Mustang, has introduced a bill that lays out the process of selling GRDA assets, which are estimated to be worth more than $1 billion. She told StateImpact Oklahoma that bad budget years make her consider funding options she might not have considered before.

Q: Is laying out a plan to sell the GRDA because of the desperate need for revenue, or do you really think it would be better for the GRDA to be privatized?

A: Ever since I’ve been in [office], something I’ve wondered about is are there some things that we administer as state government, or own as a property of state government, that are really not a core service of government? Should we be in the electric utility business is a good question. And is this asset worth a lot of money that we should consider if this is something we could transition to private industry.

Q: You’ve said selling GRDA assets shouldn’t be used to plug a budget hole, although, is it at all tempting? That would do it. That would fix the budget hole this year.

A: It would, and of course that’s tempting, but it wouldn’t be wise and it wouldn’t be prudent, because if you plug that with one-time money, are you back in the exact same hole next year?

Q: Do you see the scenic rivers being under GRDA’s control for a long period of time even if the state sells some of the agency’s assets?

A: I believe that if anybody ever did look and decide that some of the assets were worth selling, it would probably only be something like the electrical transmission portion.

The passage of Osborn’s bill wouldn’t mean the Legislature authorizes the sale of GRDA assets. In fact, the legislature wouldn’t get to approve such a sale if the bill becomes law. The decision would lie with a group of state leaders: The secretary of finance, governor, speaker of the House, and Senate President Pro Tem.

Mining is big business in south-central Oklahoma, particularly for the limestone needed for road and building construction, and silica sand used in the hydraulic fracturing process. Currently, for every ton of material mined, a penny goes to the Oklahoma Department of Mines, which oversees and permits the industry. Osborn introduced a bill to increase that amount to one and a quarter cents per ton.

Q: Is that to help fund the Department of Mines, which has been drastically cut over the past few years?

A: When I came in I remember saying “the Department of Mines? Why in the world do we have that in Oklahoma?” I didn’t know about any gold or silver mines. But every time you see a gravel pit, those are maintained through weights and measures through a very tiny agency called the Department of Mines. I think they have four or five employees. But it’s a very important function. We have consistently cut their budget. A lot of these agencies I’ve been talking about aren’t the big sexy agencies where you want to get more to education, and you want to get more to Corporation Commission for earthquakes, you want to all these kinds of things, but everybody kind of forgets about the Department of Mines. So, this was an actual fee increase requested by industry.

A: It was, because they realize it’s important to have regulation so that people feel like when they go out and do these things that people are accountable, that there’s actually a good modicum of regulation, not overregulation. So when an industry comes to you and says “would you run something to give us a fee increase because you’ve had to cut us so much. This would at least get us back where we could have a little more funding to do what we need to do,” how can you say no to that?

Osborn’s bill to increase the fee for non-coal mining has already passed the Natural Resources and Regulatory Services Subcommittee. She expects her GRDA legislation to get a committee vote within the next two weeks.