A pile of crushed limestone sits near the train tracks at Texas Industry's large mining operation near Mill Creek, Okla. 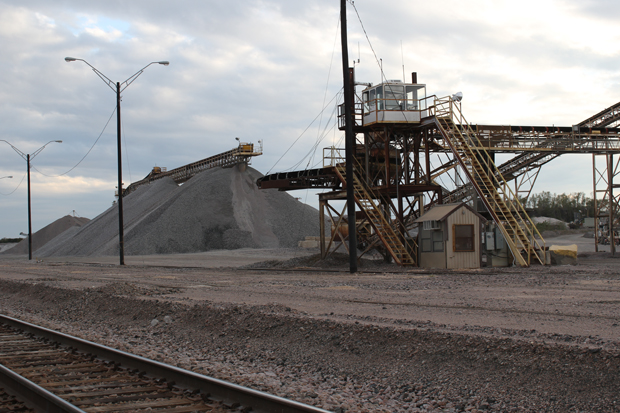 A pile of crushed limestone sits near the train tracks at TXI's large mining operation near Mill Creek, Okla.

Oklahoma County District Judge Barbara Swinton on Wednesday ordered the long disputed limits on how much water can be taken from one of the state’s most sensitive aquifers — the Arbuckle-Simpson in south-central Oklahoma — to go forward.

The court was hearing an appeal of the limit from groups including the Oklahoma Farm Bureau, Oklahoma Independent Petroleum Association, Oklahoma Aggregates Association, and mining company TXI — all petitioners in the case.

During the hearing, their attorneys argued the withdrawal limit of .2 acre-feet per acre, per year for non-residential groundwater users amounts to an unconstitutional taking of private property, and that the science the Oklahoma Water Resources Board used to determine the limit was faulty.

Back in 2003, in response to attempts to sale water to central Oklahoma, the state legislature passed a bill that put a moratorium on moving Arbuckle-Simpson water out of its basin, and required the OWRB to determine the amount of water that could be removed from the aquifer without disturbing the natural flow of springs and streams the aquifer feeds — the maximum annual yield. It took millions of dollars and years of research to find that number — .2 acre-feet per year.

While the OWRB’s study was in progress, the temporary limit was set at ten times that amount — 2-acre feet per year. The new, much smaller limit angered heavy groundwater users in the area, like limestone mining companies.

StateImpact has reported on the ensuing fight over the maximum annual yield at the OWRB and now in the courts, and on the impact of mining in that part of Oklahoma. From October 2013:

Digging a quarter-mile wide hole hundreds of feet deep displaces a lot of aquifer water. And if the water level of the aquifer drops below where it enters streams and springs, towns like Ada, Tishomingo and Davis will have to find another source.

…Landowner Shannon Shirley blamed mining or the disruption of the creek she relies on when StateImpact visited her property last summer.

“When we first moved down here, we had tons of water,” Shirley says. “We had enough water that we could put a paddleboat in this creek. Now we can’t even put a canoe on it.”

Just before the judge’s ruling, Michael Wofford, attorney for opponents of the aquifer limit, made a last attempt to convince her to strike down the OWRB’s maximum annual yield order.

“[It] would set a precedent statewide that the State of Oklahoma can take peoples’ groundwater away from them for reasons that are not supported in science, and without paying for it,” Wofford told the judge.

Opponents can still appeal to the Oklahoma Supreme Court.

Following the decision, Amy Ford, President of Citizens for the Protection of the Arbuckle-Simpson Aquifer, was surprised the decision came so quickly.

“We have excellent legal counsel that just did a phenomenal job,” Ford says. “I was trying to decide whether to cry or clap or what. It’s a huge day for us.”