Four dollars. That is what employees at Dyn have to pay for a breakfast burrito made with bacon smoked in North Country, peppers grown in Chester, and a host of other local ingredients.  That is, if they mosey across the street from their offices to the Dyn Cafe – an at-cost farm-to-table operation that Dyn opened in July. Sadly for the rest of us, the cafe is employees only. 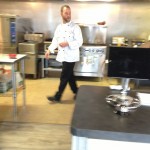 Kevin Donahue was Executive Chef at XO on Elm before Dyn recruited him to run the Dyn Cafe. 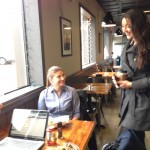 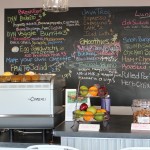 Manchester’s Dyn, Inc has a farm to table menu for their employees 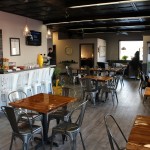 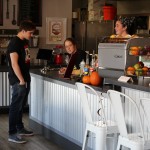 Cafe employees take the order of a customer/colleague. 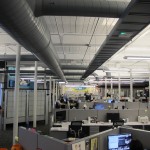 Dyn headquarters are across the street from the Dyn Cafe. 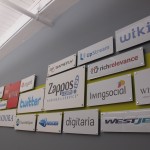 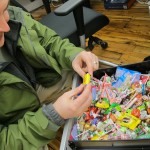 Dyn is an internet infrastructure company in Manchester with a workforce of 190 people. The company spends about $18,000 per year, per employee on benefits, from health insurance to free gym memberships, unlimited time off, an indoor climbing wall, and now – an at-cost farm-to-table cafe.

What’s in it for Dyn?

Dyn has an expanding list of clients like Netflix, Etsy and Pandora, and requires an ever-increasing workforce of software engineers, tech-savvy salespeople and more.

The problem is, New Hampshire’s workforce is aging and shrinking. Young people have always left the state for college or job opportunities, often heading to Massachusetts, New York, and the south Atlantic states. For the first time, the in-migration of 30 and 40-somethings is slowing.  While New Hampshire saw a net in-migration of 10,681 people in 2001, the state experienced a net out-migration of 2,329 individuals in 2010.

In order to compete for some of the country’s most sought-after skills in a place that isn’t Boston, Silicon Valley, or New York, Dyn has had to get creative about recruiting and retaining talent.

More about that cafe

The new cafe is run by Kevin Donahue, an internationally trained chef who Dyn snatched from Manchester’s popular restaurant, XO on Elm.  Donahue hand picks each ingredient from local farmers. He says his favorite local farmer is Richard Uncles, who grows only peppers. “He does such a variety of peppers, it’s amazing,” says Donahue, who also buys from Larry Pletcher in Warner, The North Country Smokehouse in Claremont, and Pete And Gerry’s eggs in Monroe.

The company’s COO, Gray Chynoweth, is the guy behind the idea.

“In the tech community, people [who] work in New York, California, they work in these really fun, cool cafes,” Chynoweth says – something harder to come by in Manchester, New Hampshire. Yet, he says, trying to make the city of about 100,000 into the Silicon Valley – or even Boston – would be a mistake.  “I think that’s what young people are looking for, is authenticity,” Chynoweth says. “Those kinds of things are really critical to making people feel like they are part of a community — a sticky, attractive place.”

That’s why, Chynoweth says, the cafe focuses on what Manchester does best. He says he wanted to tap into those “authentic New Hampshire experiences — New Hampshire maple syrup, pastries that were made just a few blocks away, connecting with the farmers who grow the vegetables we’re going to eat with our salads.”  It’s those things, he says, that make people feel like they are part of a community.  Community is something Chynoweth says he’s trying to nurture not only at Dyn, but in Manchester in general.

Chynoweth hopes the Dyn Cafe will become just one of many hip, farm-to-table outfits in Manchester.  He says that’d be good for Manchester’s economy, cool for the community, and would help attract young workers, too.