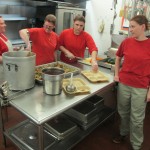 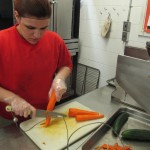 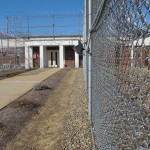 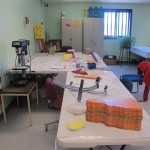 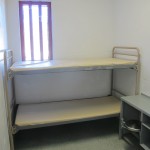 Over the hum of vending machines in the prison visitors room, Wheatley says she’s 4 years into her 6 year minimum sentence.

When Wheatley gets out of prison, she wants a job that will help her pay restitution, support her family, and contribute to society. She hopes to work in the restaurant industry, she says, because she loves cooking:

It’s a relaxer, for me. It makes me happy

Wheatley cooks meals for the 150 or so other inmates in the Goffstown prison’s kitchen. She also makes things like nachos from canteen items, during her free time:

We can throw down some pretty good things that would make most chefs be like “you can do that in prison?”

If she were at the men’s prison in Concord, Wheatley could earn a culinary certificate, and take mechanics and carpentry classes transferable at nearby colleges.

The women inmates are limited to putting holes into cribbage boards shaped like the state of New Hampshire — and painting butterflies onto miniature butterfly houses.

But things may be different for future inmates.

Since the 1970s, changes at New Hampshire prisons have happened when prisoners sue the state, and the court orders something change. That’s how women inmates ended up in Goffstown in the 1980s. Before that, New Hampshire shipped them to federal prisons out of state. Court orders and consent decrees also forced the state to add health programs, educational classes, and a secure psychiatric ward to the men’s prison. It’s not always easy.

It’s almost the rule rather than the exception that court orders come and court orders go and nothing happens. Why? Because it usually takes an infusion of resources.

Legal Assistance attorney Elliot Berry has represented New Hampshire inmates for more than twenty years. He says it’s hard for lawmakers – in any state — to increase spending on corrections – even with a court order to do so.

The needs of convicted felons are not high on the list of priorities for legislators.

But this time around, lawmakers seem ready to act. The suit filed by three female inmates against the state seeks educational and health services on par with the programs already available at the men’s prison.

Corrections Commissioner Bill Wrenn says he has been asking the legislature for the money to build a new women’s prison – since Governor Lynch appointed him eight years ago.

We don’t approve the budgets, that’s something the Governor and the legislature does. Y’know, all we can do then is try to convince those powers to be, that we have certain needs that need to be funded.

Lawmakers’ fear of a court order may help Commissioner Wrenn get the new women’s prison and programming he’s been requesting all these years. That’s if the Senate signs off on the capital budget, like the House did:

This is the first time we’ve seen it go as far as it has to date.

Back at the visitor’s room at Goffstown, Holly Wheatley says she wants the next two years to be her last two years in prison:

She says having the space and staff to learn marketable skills will make it easier for inmates like her to get on track, and stay on track.