While beer sales have been down, nationally, since the great recession, the craft beer industry has been going strong – growing 15 percent in 2011, according to the American Brewers’ Association.

The newest kid on the block in craft beer is the “nanobrewery” – a very small scale commercial brewery that produces fewer than 2,000 barrels a year. To put that in context, the Brewers’ Association defines a microbrewery as producing fewer than 15,000 barrels a year, and a large brewery as exceeding 6 million*.  Hess Brewing in California keeps a list of nanobreweries and estimates there are about 93 in operation nationally – although that list is probably not comprehensive. 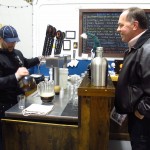 A customer makes an order at Throwback’s tap room. 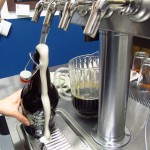 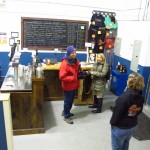 A customer chats with Throwback co-owner Nicole Carrier at the Throwback tap room. 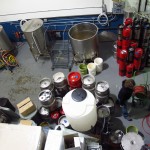 The Throwback Brewery is located in a small warehouse in North Hampton, NH. 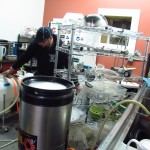 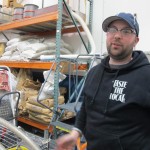 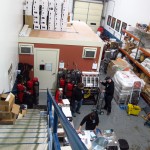 A set of stairs lead up to Annette Lee’s office above Throwback Brewery. 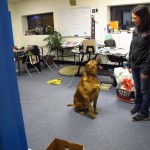 Throwback co-owner Annette Lee works from an office above the warehouse. 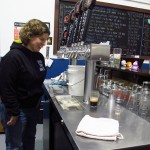 New Hampshire is the only state in the nation to recognize and codify nanobreweries as separate from large-scale beverage manufacturers. In doing so, the state lowered certain Prohibition-era liquor limitations that make it hard for the little guys to get a license, open a tap room and get brewing – including a requirement that a brewery sell hot food if they wish to serve beer.

A year and a half after the nanobrewery law went into effect, New Hampshire has seven nanobreweries, and a few more on the way. Throwback Brewery in North Hampton is one of the larger operations.  It is run by Annette Lee, a former environmental engineer, and Nicole Carrier, a software marketer.

Throwback is located in a small warehouse park that is easy to miss from the main road. The obscure location doesn’t stop four customers from straggling in on a Wednesday evening, ordering growlers and drinking four ounce glasses – they cost $1 each – at two mismatched kitchen tables to the side of the bar.  Behind the bar, hoses line a clearing between burlap bags of grain, five-foot tall chrome tanks, and an array of equipment, much of which was jerry-rigged by Lee.

The popularity of nanobreweries like Throwback has a lot to do with the local food movement. Carrier and Lee source most* of their ingredients within a 200-mile radius, and vow never to produce more than their local community has an appetite for. “Our whole goal is to make great local beer from local ingredients, and serve it around here,” Carrier says.   During the last legislative session, Lee was instrumental in getting a bill passed that allows nanobreweries to sell beer at farmers markets. They hope to begin setting up at markets next season.

But can a good nanobrewery stay “nano”?

Nanobreweries are also fueling consumers’ appetites for experimental beers. Their “nano-sized” batches make it easy to try new things all the time.

Successful nanobreweries, however, may not stay “nano” for long.  Retailers who sell Throwback – Barb’s Beer Emporium in Concord, and The Meat House in Pembroke and Portsmouth, for example —  say the small scale of nanobreweries is hard on them. “The thing about nanobreweries is they run out of products,” says Tom Brock Jr., who buys beer for Meat House.

Demand often exceeds the production capacity of a successful nanobrewery — but even if it doesn’t, a lack of distribution infrastructure makes deliveries infrequent. When customers return for more of something they liked and find it’s unavailable, they choose another brand and don’t look back.

That’s one reason the small-scale beverage industry is pushing for more legislation this session. Representative Tim O’Flaherty (D) Manchester, among others are working on bills that would lift limitations on beer retailers, brewers, and cross-licensing, to make it easier for small-scale breweries to grow, serve and distribute their products.  Additionally, a Bipartisan Beer Coalition is forming in the House of Representatives. Its first meeting is scheduled for January 23.

In the meantime, Throwback is already planning its expansion to a farm nearby, where it will likely graduate to a traditional brewery license, to meet growing demand.

*CORRECTIONS: Details in this sentence have been revised since the post was published.