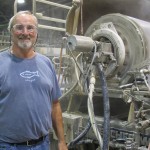 “My parents wanted me to go to college, but I was more interested in earning some money to get a car. And then one thing led to another, and then I met my wife, got married, and there was really no turning back after that,” says mill worker Rollie Leclerc. “I really like working here. It’s a place where you can earn a decent wage and kind of live the lifestyle a middle American is supposed to. You have a house and a car and a decent living.” 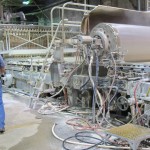 “You sit at home and you watch the news and you see all these people that are 50 and older and have lost their jobs, and it doesn’t really hit home because it’s not affecting you,” Leclerc says. “But boy oh, boy, I tell you what, now I totally understand the hardship of finding employment, especially being over 50 years old. Employers do look at you differently.” 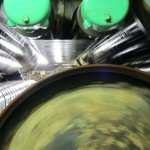 After he was laid-off for the second time, Leclerc says, “I wasn’t able to find any work at all. We got by with unemployment benefits, and we watched our pennies. But it was luck that the mill reopened, because the benefits were running out. When you’re living on that kind of money compared to what I was making at the mill, your wage cut is at about 70 percent.” 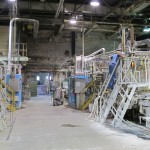 “I’m one of the fortunate ones. I didn’t have a house payment. It’s the benefits. Health care is nuts. I was paying $980 a month while I was out, with a $6,000 deductible, for myself and my wife. So getting back here and having access to health care is huge,” Leclerc says. 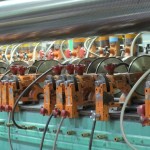 Leclerc’s hopeful about the future of the mill, but, “This time around, it’s been a slower start-up. When we shut down in 2000, and we started up [again], all our past customers came right back,” he says. “This time around, they’re a little reluctant. So we’re gaining their trust again. But it’s a slower process than we thought.” 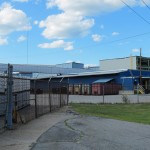 Although finding work in the North Country at places like Gorham Paper and Tissue is hard, Leclerc says in some ways, having an education makes it tougher. “If you happen to have a college degree, you’re limited to where you can go as far as employment, unless you’re into the medical field, a few other areas. That’s why, when our kids go to college, it’s like a farewell. They never come back. Not because they don’t like the area. No opportunity.”

As part of our weekly “Getting By, Getting Ahead” series, StateImpact is traveling across New Hampshire, gathering personal stories from the people behind the economy.  In our seventh and final installment, we talk with a longtime North Country mill worker who has been laid off, and re-hired, twice.

The factory floor of Gorham Paper and Tissue is a miserable place on hot summer day.  The massive cylinders noisily turning watery pulp into paper are incredibly hot, almost oven-like, except that the water passing through them creates a thick veil of humidity.

Deeper into the mill sits the small, cool, control shack that is Rollie Leclerc’s domain.  He is a machine tender, and part of his job involves maintaining the balance between tons of hardwood, softwood, and pulp coursing through the machines.  This blend is key to making high-quality paper.  Underneath the safety glasses and steel-toed boots, Leclerc (pronounced “Leclaire”) is a good-natured guy with a big laugh and an easy smile.  Leclerc has been on this mill floor since 1977.  And he’s proud of his deep family roots in this line of work.

“My grandfather immigrated from New Brunswick, Canada, right after the Depression, worked at the Burgess Mill, which is up in Berlin,” Leclerc says.  “My father was a paper maker here [in the North Country] for 44 years, and I chose to do the same.”

In this respect, Leclerc is like a lot of longtime North Country residents.  Going back to the late 1800s, French-Canadian immigrants would venture to thickly forested northern New Hampshire to work in its thriving lumber, pulp, and paper mills.  Other factories, many tied to the wood products industry, helped build the area up as well.  Even as manufacturing declined in the 1980s, the region’s economy held on. But then a few years ago, the death-watch began. Leclerc can recite the litany of plant closures off the top of his head.

“We had Wausau that closed, employed over 200. Isaacson Steel just closed, and there was approximately 175 employees there.  We had the Car Freshener plant that closed with approximately 50 employees there,” Leclerc continues.  “We had the Ethan Allen plant [near] the Canadian border [in Vermont], which more than 80 percent of the people working there lived in New Hampshire.”

All the bad news leaves Gorham Paper and Tissue, Leclerc’s employer, as the last paper mill in the North Country.  It has changed hands multiple times, and shut down twice—once in 2000, and again 10 years later.  Both times, Leclerc was laid off.  “The first time, I was lucky, because there was a lot of work.  This time around was totally different,” he says.

During his first layoff, Leclerc found a construction job in the southern part of the state.  The Seabrook nuclear power plant had some major construction projects in the works, and needed manpower.  So for a year, Leclerc spent five days a week living with his sister in Manchester and commuting to the Seacoast.  He only came home on the weekends.  It was tough on him and his family, but Leclerc was grateful to have good work while he waited out the layoff.

But this time around, with construction hurting from the housing bust, that option was gone.  And in the North Country, there were only a handful of jobs at grocery stores and Walmart — mostly part-time jobs without benefits.  Still, competition was fierce.

“When you fill out resumes. and back then, I filled-out that I was 58, and have a high school education, and I’m a paper maker,” Leclerc remembers with a rueful chuckle. “I tell you what, you’re kind of limited to finding, you know, jobs associated with your skills.”

Watching Leclerc on the factory floor, as he rushes around turning valves, pulling levers, and pushing buttons, it’s clear he’s a practiced hand at paper making. And it’s a tough job.  But it’s work he is grateful for.  Last year, the mill reopened after it was bought by the New York-based private equity firm Patriarch Partners, headed by Lynn Tilton.  To a lot of people here, including Leclerc, Tilton is an economic savior.  But for the unionized floor workers, compromise was part of the deal.

“When Lynn took over the mill, she was totally honest.  She said it was going to be a struggle.  She said it was going to be a partnership, but there would be concessions made on both sides,” Leclerc says.  “We had to do concessions on vacations.  We used to have a premium day [extra pay] on Sunday.  We had to give that up.  She’s not the fairy godmother.  She doesn’t just show up, with her checkbook, write out a check, and say continue doing what you were doing.”

For his part, though, Leclerc says he wants to keep doing what he’s doing for at least five more years, “Then I’ll be looking at retirement,” he says. Then he pauses, cracks a grin and once again laughs through the worry.

“And hopefully at that time, Social Security will still be around!”