Protesters confront a construction crew for the Atlantic Sunrise pipeline in central Pennsylvania in October 2017. 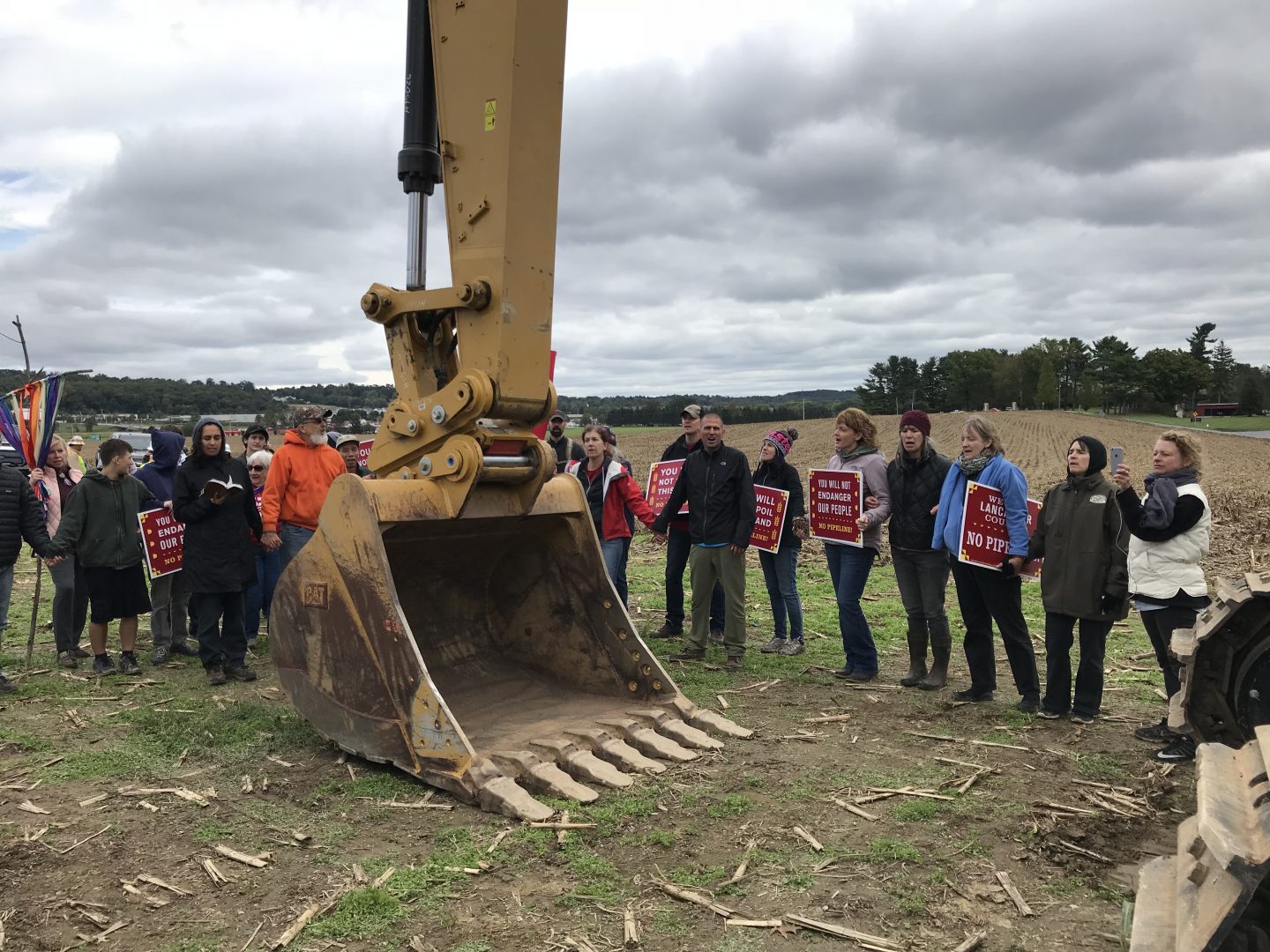 Protesters confront a construction crew for the Atlantic Sunrise pipeline in central Pennsylvania in October 2017.

A group of Catholic nuns who sued a pipeline company that seized its land through eminent domain argued Thursday in federal court in Philadelphia that environmental protection and stewardship of the land holds the same weight as their anti-abortion, or “pro-life” stance.

The Adorers of the Blood of Christ say Transco’s Atlantic Sunrise natural gas pipeline, completed in 2018, violates their religious beliefs and commitment to care for the Earth.

“Every day since October 2018 when the pjpeline construction was completed …Transco continues to add to the profits of its $40 billion dollar corporation,” said Adorers of the Blood of Christ Sister Dani Brought outside the courthouse. “Every day since October 2018, as fossil fuel gas flows through our farmland in Lancaster County, so also flows Transco’s blatant disregard and trampling of the Adorers’ religious beliefs.”

A three-judge panel of the 3rd Circuit Court of Appeals heard oral arguments on the case that pits the Natural Gas Act against the Religious Freedom Restoration Act. While the Adorers stressed their religious beliefs and the threats of climate change in their briefs to the court, the judges were more interested in legal issues surrounding jurisdiction and regulatory procedures. They asked no questions about the nuns’ faith or the impacts of fossil fuel development on a warming climate.

The Natural Gas Act governs pipeline construction and distribution of natural gas, which is overseen by the Federal Energy Regulatory Commission. The Religious Freedom Restoration Act prohibits government agencies or officials from interfering with an individual’s religious expression. In one of that act’s most well known applications, the Supreme Court ruled in favor of Hobby Lobby in 2014 and struck down the mandate for health insurers to provide contraception under the Affordable Care Act. And in a blow to LGBTQ rights, the Supreme Court ruled in favor of a Colorado baker who refused to make a wedding cake for a same sex couple. 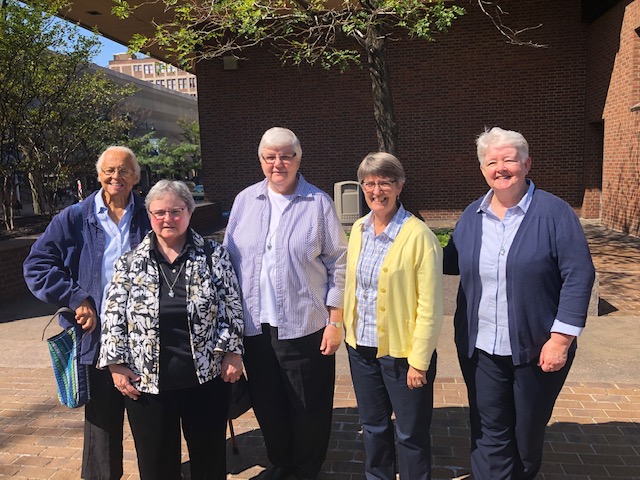 Sisters of the Adorers’ of the Blood of Christ outside the federal courthouse in Philadelphia. From left, Sr. Helene Trueitt, Sr. Sara Dwyer, Sr. Joan Hornick, Sr. Dani Brought, and Sr. Janet McCann.

The Adorers of the Blood of Christ own land in Lancaster County where pipeline company Williams/Transco built part of its Atlantic Sunrise natural gas pipeline.

Passing through 10 counties, the Atlantic Sunrise carries Marcellus Shale gas to an export terminal on the Chesapeake Bay. It faced particular opposition in Lancaster County, where vocal opponents expressed concern about pipeline safety and the impact of fossil fuel production on the climate.

The Adorers built a chapel in the pipeline right-of-way and raised a giant cross at the construction site. Federal marshals called to the site threatened to arrest the nuns if they challenged construction. A nonviolent direct action led to the arrest of 23 people in 2017.

This lawsuit is the second case brought by the Adorers, who had previously sought to halt construction by challenging the permit based on their religious convictions. A series of rulings rejected it based on jurisdiction, and the Adorers filed a second suit in 2020 seeking monetary damages. That was similarly rejected by the U.S. District Court. The Adorers then appealed to the 3rd Circuit.

Third circuit judges Stephanos Bibas, Cheryl Ann Krause, and Marjorie Rendell peppered the Adorers’ attorney Dwight Yoder with questions as to why the nuns did not challenge the original FERC order allowing Transco to seize the land. They also questioned the justification for monetary damages, saying the Religious Freedom Restoration Act provides for “appropriate relief,” which in this case would have been FERC deciding to re-route the pipeline.

Yoder countered that the act does allow for monetary relief, and while the Adorers are not asking for a reversal of FERC’s decision at this point because the pipeline is already in the ground, the presence of it continues to violate their religious beliefs. Yoder emphasized the intent of Congress to protect religious freedom in the implementation of federal laws, including the  National Gas Act.

Yoder told the court the nuns were “innocent bystanders” to the complex regulatory landscape that allowed a billion-dollar fossil fuel company to impose its will. Rendell seemed frustrated by the fact that the Adorers never followed proper regulatory procedure by challenging the eminent domain order through the FERC process, as other landowners had done.

“Well they definitely were bystanders, but I don’t know about innocent,” she said.

Speaking later outside the courtroom, the Sisters said the Adorers had no legal representation at the time, and did not understand the communications sent by the company and FERC. But they said they hope the judges look past what they “did or did not do” and see that they did try to fight the taking of their land through other means.

“Looking at those letters, none of us being lawyers, we thought all we needed to say [to Transco] was…we do not want to participate in this process, it goes against our religious beliefs,” said Sister Janet McCann.

The Adorers of the Blood of Christ is an order of Catholic nuns established in 1834 who take vows of poverty, chastity and obedience. Their lawsuit quotes Laudato Si’, Pope Francis’ 2015 encyclical on climate change, as evidence of their religious commitment to fighting global warming caused by the production and burning of fossil fuels. The order also adopted what they call a “Land Ethic” in 2005 as part of their environmental religious practice.

Transco argued the Adorers forfeited their legal options by failing to take their case directly to FERC during the permit process. In a brief, Transco told the court the Natural Gas Act applies to all issues surrounding the transportation and distribution of natural gas, which must supersede religious freedom act, or risk allowing anyone to wait out the FERC process and sue after the pipeline is in the ground.

“The Adorers’ challenge unavoidably and fundamentally remains an impermissible collateral attack on FERC’s orders and authorizations to construct and operate the project. Had the Adorers participated in the FERC process, FERC may have changed the pipeline route to avoid their property, or a federal appeals court may have ordered FERC to do so,” read the brief.

Representing Transco, attorney Elizabeth Witmer told the court that if they ruled in favor of the Adorers, it would have widespread repercussions. “This is a lying-in-wait collateral attack,” she said.

But, for the Adorers, it’s more personal. They say it impacts directly on their faith.

“Somehow our land is complicit in allowing fossil fuels to perpetuate in the United States and that’s so against what we believe and what we would hope for our Earth,” said Sister McCann. “It’s a daily sadness for me to know that’s going on on our property.”