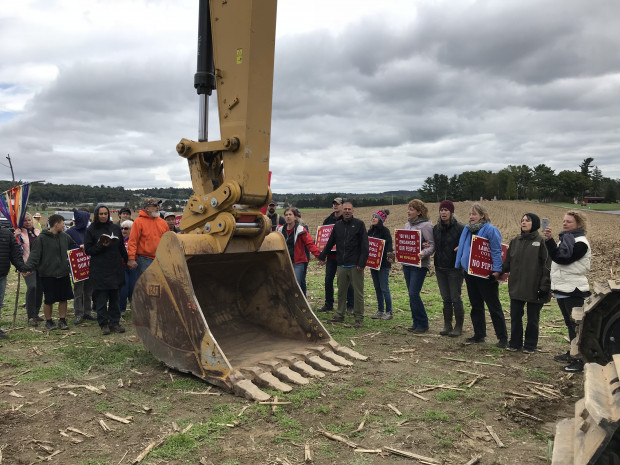 Protesters blocked equipment and sang hymns for about half an hour before police asked them to leave. Nearly 30 people were charged with defiant trespassing.

Twenty-three people were arrested and charged with defiant trespassing Monday after they blocked construction equipment for the Atlantic Sunrise natural gas pipeline in Lancaster County.

The showdown between the pipeline company and the protesters has been in the making since the project was first announced three years ago.

The Atlantic Sunrise pipeline is being built to carry natural gas southward, from the Marcellus Shale in northeastern Pennsylvania. It will eventually pass through 10 counties, but it’s been met with the most opposition in Lancaster.

86-year-old Barbara Vanhorn of Duncanon was among those arrested, and says she’s worried about how natural gas contributes to climate change.

“I feel really frustrated with our courts and our government,” she says. “They’re giving in to these big, paying, lying companies that are trying to destroy not only our country, but the world.”

More than 100 people gathered in a cornfield in West Hempfield Township early Monday morning, next to the right-of-way where the pipeline is going to be installed. The property is owned by the Adorers of the Blood of Christ, a group of Catholic nuns who are suing to block the pipeline, citing their religious freedom.

Before the protesters entered the construction zone the nuns’ attorney, Dwight Yoder, informed them that the Adorers were not giving people permission to enter the property, which has been taken through eminent domain.

Mark Clatterbuck, of the group Lancaster Against Pipelines, told the crowd they were still welcome to “stand in solidarity” with the nuns, but that trespassing in the work zone had to be an individual choice. The distinction is intended to shield the nuns from the liability that may come with inviting protesters to violate a court order.

Shortly after noon, a few dozen people entered the work zone and encircled an excavator. They were told to leave by one member of the construction crew but ignored him and spent about a half an hour holding hands and singing hymns before police began to issue warnings and make arrests.

Brett Hambright, a spokesman for Lancaster County District Attorney’s Office says everyone arrested was charged with defiant trespassing, which carries a maximum penalty of one year in prison.

“I want to stress that we take no joy in arresting individuals,” says Hambright. “But it has been a cooperative group that has worked with our police. They were very peaceful and respectful, which is exactly what the police wanted to reciprocate with them as well.”

A majority of the people arrested are from Lancaster County. Those from elsewhere include Vanhorn, a Massachusetts woman, a West Virginia man, two people from York County and one from Centre County.

Chris Stockton, a spokesman for Williams, the company building the Atlantic Sunrise, said in an emailed statement the company respects the rights of people to protest, “but our focus is on constructing this important, federally-approved infrastructure in a safe, efficient manner.”

*Note: this story has been updated to reflect the exact number of people arrested and where they are from, according to the Lancaster County District Attorney’s Office.