It’s not too late to stave off the climate crisis, U.N. report finds. Here’s how | StateImpact Pennsylvania Skip Navigation

BENGALURU, INDIA - OCTOBER 11: An aerial view shows a shepherd walk past photovoltaic cell solar panels in the Pavagada Solar Park on October 11, 2021 in Kyataganacharulu village, Karnataka, India. As the countdown to the United Nations Climate Change Conference (COP26) at Glasgow begins, India is in a formidable position to lead climate change conversations as the country is on its way to meet its renewable energy target of 175GW by 2022, with solar power alone contributing to 100GW. In a clutch of villages around the Pavagada solar park in the southern state of Karnataka where nearly 13,000 acres of land has been acquired on lease for 28 years to produce 2050MW of electricity, economic inequity is becoming apparent — while farmers with large land holdings have clearly benefitted, poor farmers with no land have further been pushed to the margins with rising unemployment, lack of basic infrastructure, and a loss of their cultural identity. (Photo by Abhishek Chinnappa/Getty Images)

It’s not too late to stave off the climate crisis, U.N. report finds. Here’s how 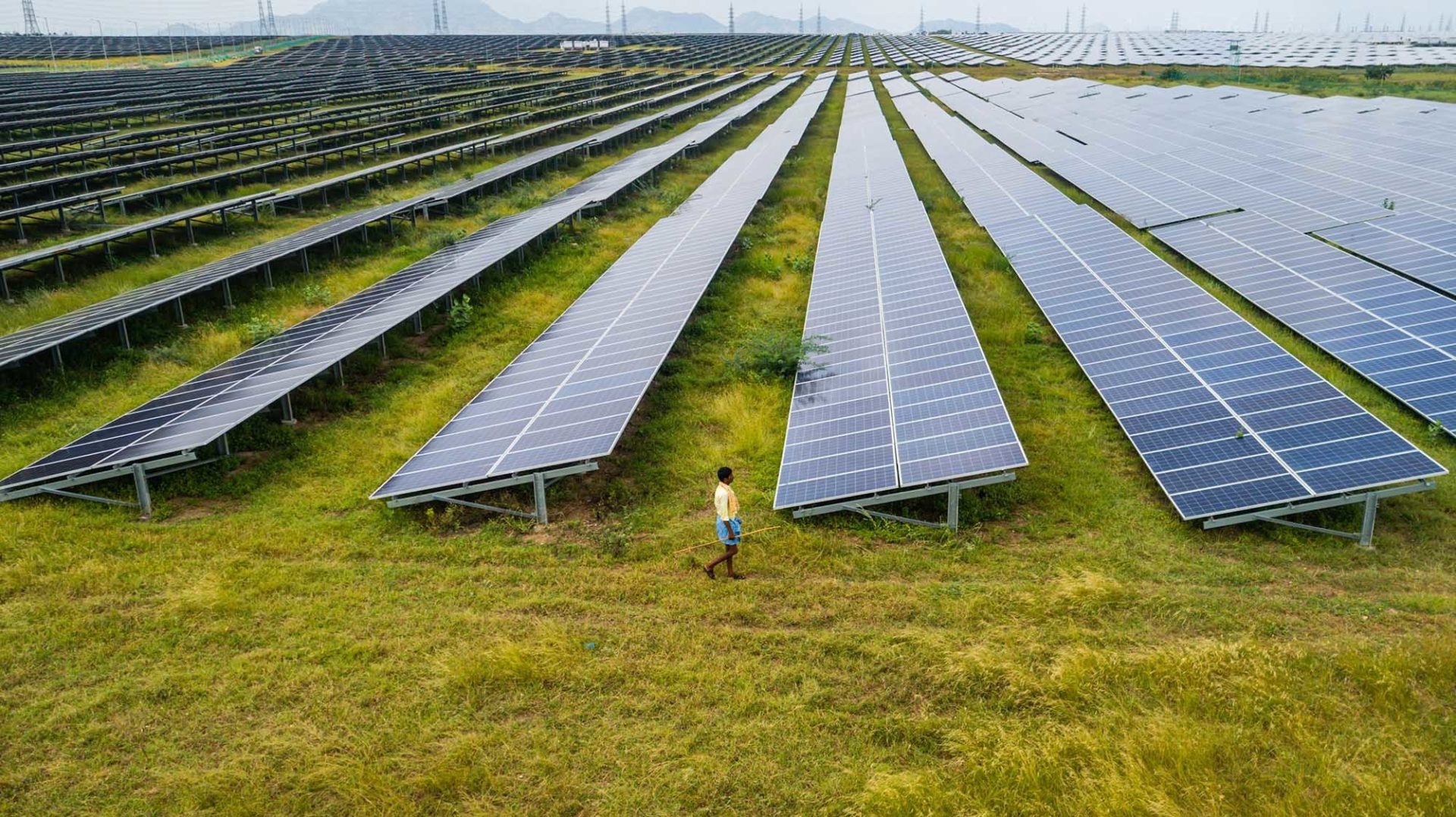 BENGALURU, INDIA - OCTOBER 11: An aerial view shows a shepherd walk past photovoltaic cell solar panels in the Pavagada Solar Park on October 11, 2021 in Kyataganacharulu village, Karnataka, India. As the countdown to the United Nations Climate Change Conference (COP26) at Glasgow begins, India is in a formidable position to lead climate change conversations as the country is on its way to meet its renewable energy target of 175GW by 2022, with solar power alone contributing to 100GW. In a clutch of villages around the Pavagada solar park in the southern state of Karnataka where nearly 13,000 acres of land has been acquired on lease for 28 years to produce 2050MW of electricity, economic inequity is becoming apparent — while farmers with large land holdings have clearly benefitted, poor farmers with no land have further been pushed to the margins with rising unemployment, lack of basic infrastructure, and a loss of their cultural identity. (Photo by Abhishek Chinnappa/Getty Images)

The world still has time to avoid the most extreme dangers of climate change, but only if nations cut greenhouse gas pollution much faster from nearly every aspect of human activity, according to a landmark international climate science report.

The technology and solutions are available to rein in emissions, but the world is rapidly running out of time to deploy them, the report notes.

“It’s now or never,” says Jim Skea, professor of sustainable energy at Imperial College London and one of the co-chairs overseeing the report. “Without immediate and deep emissions reductions across all sectors, it will be impossible. ”

The report issued on Monday is the latest by the Intergovernmental Panel on Climate Change (IPCC), a United Nations body that brings together the world’s researchers to assess the prevailing science on planetary warming. The new report looks at worldwide efforts to cut greenhouse gas emissions and recommends next steps to keep global average temperatures from rising to catastrophic levels.

Nations and industries need to make faster, deeper cuts to heat-trapping pollution. Average annual greenhouse gasses in the last decade were the highest in human history, which means the world is not on track to limit global warming to 1.5 degrees Celsius (2.7 degrees Fahrenheit), the report says. With warming beyond that level, the planet will see increasingly dangerous heat waves, floods and storms that would affect millions of people, especially the most vulnerable.

As a crucial near-term step, “substantial reduction” in the use of fossil fuels like coal, oil and natural gas would need to happen, the report finds. By 2050, low-carbon energy like solar and wind power will need to supply the majority of the world’s energy.

Experts say this report, part of a scientific assessment done roughly every seven years by the IPCC, is likely the last to be published while the key goal of limiting warming to 1.5 degrees Celsius is still possible.

The report’s final summary was adopted after marathon negotiations among the 195 member countries of the IPCC. Some countries wanted to see more support for fossil fuel use in developing countries, as well as larger demands on developed nations to reduce emissions. Industrialized nations are the biggest emitters of greenhouse gasses, with the United States being the largest polluter over time.

The report builds on the dire warnings of two others also released in the IPCC’s Sixth Assessment Report. The first documented how heat-trapping emissions from burning fossil fuels were the “unequivocal” cause of rising temperatures. The second, released in late February, showed how billions of people around the globe are at risk of more extreme disasters.

This latest report comes amidst a renewed push for oil and gas drilling, as the war in Ukraine drives a spike in oil prices. Carbon emissions already roared back to their highest levels ever in 2021, rebounding after a decline during the pandemic.

“The truly dangerous radicals are the countries that are increasing the production of fossil fuels,” U.N. Secretary-General António Guterres said in a speech. “Investing in new fossil fuels infrastructure is moral and economic madness.”

The report lays out what scientists consider to be the most effective steps to reducing emissions fast. The clearest is accelerating the use of renewable energy and cutting fossil fuels. The cost of solar energy has plummeted by 85 percent since 2010, according to the report. Batteries have fallen by the same amount, a key technology for storing solar and wind power so it can be used when it’s dark or the wind isn’t blowing. 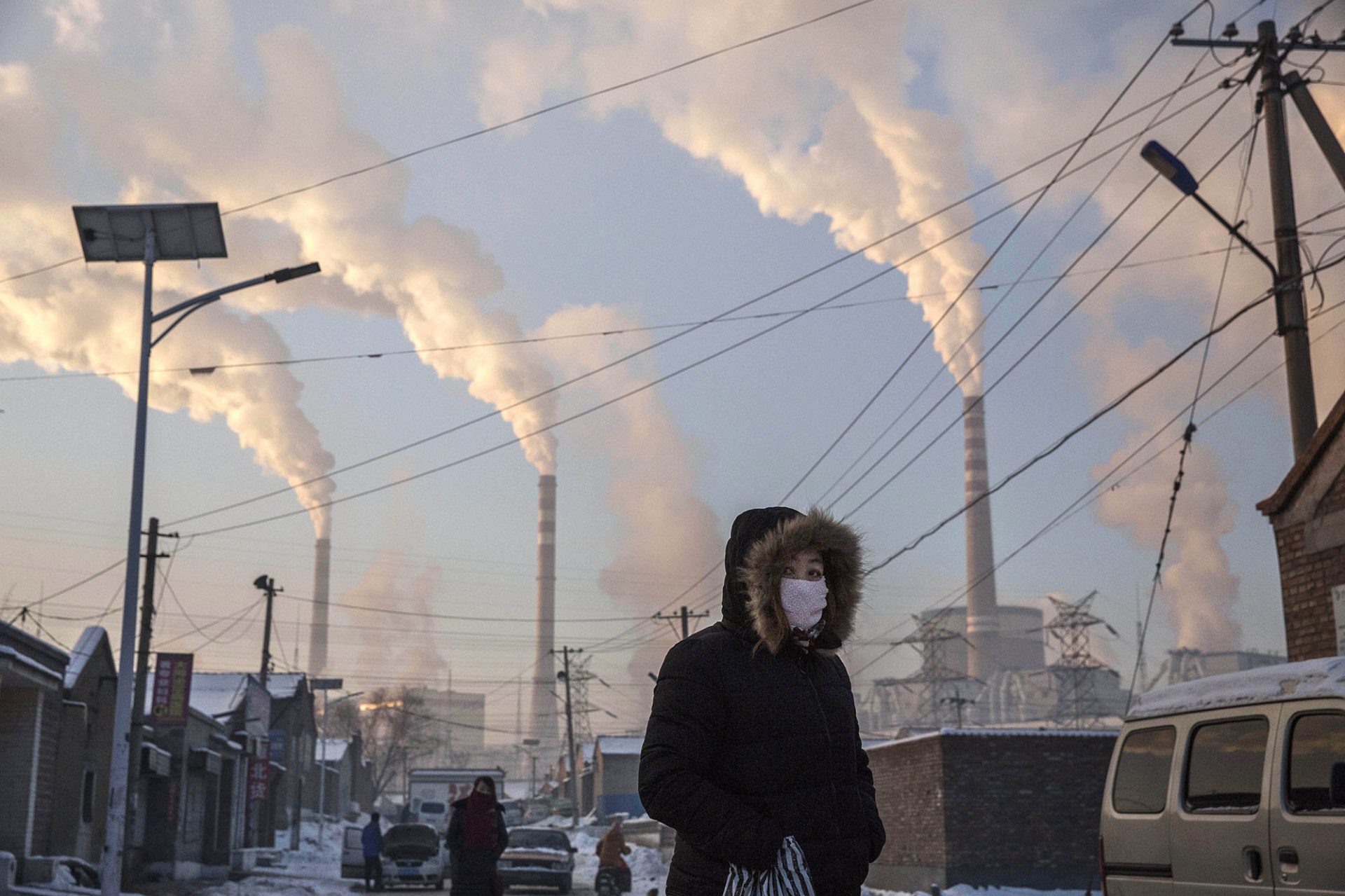 SHANXI, CHINA -NOVEMBER 26: (CHINA, HONG KONG, MACAU, TAIWAN OUT) Smoke billows from stacks as a Chinese woman wears as mask while walking in a neighborhood next to a coal fired power plant on November 26, 2015 in Shanxi, China. A history of heavy dependence on burning coal for energy has made China the source of nearly a third of the world’s total carbon dioxide (CO2) emissions, the toxic pollutants widely cited by scientists and environmentalists as the primary cause of global warming. China’s government has publicly set 2030 as a deadline to reach the country’s emissions peak, and data suggest the country’s coal consumption is already in decline. The governments of more than 190 countries are expected to sign an agreement in Paris to set targets on reducing carbon emissions in an attempt to forge a new global agreement on climate change.

In order to limit warming to 1.5 degrees Celsius, the world’s energy supply would need to reach net-zero as soon as 2050, which means if the sector is still producing emissions, those emissions are captured in some way before reaching the atmosphere. That’s because other areas, like heavy industry and transportation, would likely take longer to fully cut their emissions.

Continuing the world’s existing fossil fuel energy projects at their current pace, as well as developing new ones, puts the energy sector nowhere near that necessary trajectory. The emissions from fossil fuel use would be almost double the amount needed to keep warming to 1.5 degrees Celsius. And as renewable energy grows, trillions of dollars of fossil fuel infrastructure risks becoming “stranded”, or worthless, as governments shift to cleaner energy sources.

“The sobering conclusion is that, although we have all the tools we need, emissions would need to decrease immediately and at a much larger scale than they have been,” Stephanie Roe, one of the lead authors of the IPCC report and Global Climate and Energy Lead Scientist at the World Wildlife Fund.

Even if the world rapidly transforms where its energy comes from, some aspects of modern life will take longer to shift from fossil fuel use, like airplanes, shipping and heavy industry. Gas-powered cars being bought today will also remain on the road for potentially decades.

New technology could eventually transition those industries and vehicles away from fossil fuels. But the delay means that to avoid extreme warming, countries and companies will likely have to remove some of the carbon dioxide emissions that are already in the atmosphere, the report finds.

The most tried and tested method uses Mother Nature. Plants and soils are carbon sponges. So restoring forests and wetlands can help soak up emissions, providing a relatively low cost way of making up for emissions from other sources.

The report also points to more cutting-edge approaches, like using technology to suck carbon emissions directly from the air. That process could potentially use large amounts of energy, which would negate its climate usefulness. Some climate activists also worry it could amount to a free pass for the fossil fuel industry to keep operating and pumping out greenhouse gas emissions. The technology has a long way to go before it could make a large impact on the atmosphere, the report concludes.

Changing the way humans work, live and eat in cities and buildings can have a major impact on reducing emissions, as much as 40 to 70 percent in some of those sectors, the report finds.

The report is not just talking about recycling. Redesigning and zoning cities so people live closer to where they work and can walk and bike could reduce transportation emissions by as much as a third, the report says. Electric cars that are charged with renewable energy from the grid would reduce fossil fuel use. Making buildings more energy efficient and using renewable energy like solar has a decades-long impact.

With many cities around the world still growing and urbanizing, building in a sustainable way is especially important in developing countries, the report finds. Cities are vulnerable to flooding and air pollution, as well as extreme heat waves made worse by the way pavement absorbs heat.

Read more about climate change in Pa. Join us at Climate Solutions.