Renewed attempts by Pennsylvania House Republicans to boost natural gas production by ending a ban on new drilling on public lands, among other measures, are unlikely to succeed because the industry already owns many unused leases on those lands, and because it lacks the pipeline capacity to take any new gas to market even if it was produced, analysts said.

In early March, GOP members introduced a raft of bills and resolutions designed to increase gas production and so lessen national dependence on imported energy at a time when Russia, a major energy exporter, has invaded neighboring Ukraine.

The measures seek to halt Gov. Tom Wolf’s moratorium on new drilling under state forests; urge the Delaware River Basin Commission to end its ban on fracking in the basin; ask the governors of New York and New Jersey to allow pipeline construction so that more Pennsylvania gas can get to market; and boost domestic consumption of natural gas by stopping Pennsylvania’s plan to join the Regional Greenhouse Gas Initiative.

But all the initiatives are likely to miss their targets, and represent another Republican attempt to enact familiar measures at the behest of the natural gas industry, analysts said.

“All these are things that they have been suggesting on behalf of the natural gas industry for years,” said David Hess, who was secretary of the Department of Environmental Protection from 2001 to 2003 under Republican governors Tom Ridge and Mark Schweiker. “It’s nothing new.”

Hess said that even if the Legislature approves the plan to open up state lands to new drilling, it wouldn’t result in the desired production increase because some two-thirds of the leases already held by drillers are unused, showing that it’s not the ban on opening up public lands that’s holding back production.

“No material increase, with or without lifting the ban (on drilling under state forests), is possible in the short-term, and is then dependent on whether future pipelines taking gas out of the basin come online.” — Matthew Bernstein, senior analyst for shale exploration and production at Rystad Energy

In fact, he said, drillers have avoided developing many leases because of low market prices, at least until the middle of 2021. More recently, expansion has been slowed by a labor shortage, supply-chain snarls, and even a shortage of sand for fracking.

“It would be a little silly to open more land to leasing when they haven’t developed what was considered prime leasable land back in 2008,” Hess said.

Cindy Adams Dunn, secretary of the Department of Conservation and Natural Resources, told lawmakers in a Senate budget committee hearing on March 2 that 65 percent of existing shale gas leases in state forests have not been developed. 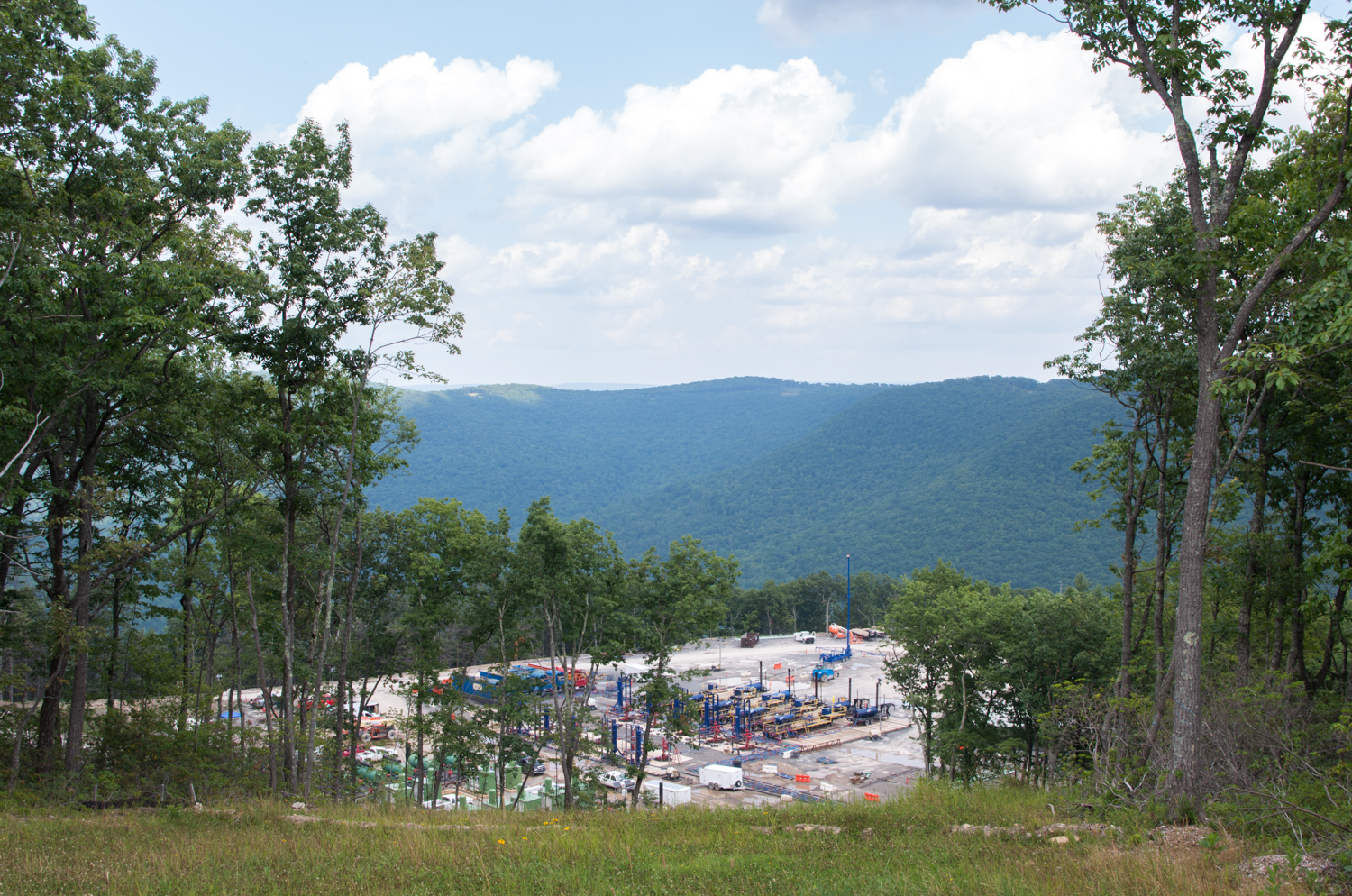 A gas drilling wellpad in the Loyalsock State Forest.

Quoting data from Pennsylvania’s nonpartisan Independent Fiscal Office, Hess noted that the industry  produced gas from 10,322 wells in the fourth quarter of 2021, compared with 13,395 drilled, showing that more than 3,000 wells are shut in.

“Right now, today, they have multiple options if they wanted to increase production out there,” he said. “So far, they have not shown any interest in doing that.”

Despite Republican calls for higher gas production, IFO figures show it actually increased by 6.7 percent in the fourth quarter of 2021 compared with a year earlier, suggesting more downward pressure on prices.

Natural gas futures prices rose to around $5.50 per million British thermal units in late 2021, their highest in more than a decade, after years when abundant production from the state’s Marcellus Shale kept the price at around $3. On Tuesday, the futures price in New York closed at $5.33.

Before the recent spike, the market slump deterred energy companies from adding new production, even from some wells that they had already drilled, and led some investors to pull back on their support of the Pennsylvania industry after returns had not been all they had hoped.

Pa. could help the U.S. “and our allies more secure by no longer needing to be reliant on countries like Russia and other geopolitical actors that do not share our values to heat our homes and fuel our cars.” — Jason Gottesman, spokesman for House Republicans

House majority leader Kerry Benninghoff (R-Center/Mifflin) said the United States should use Russia’s invasion of Ukraine as an opportunity to wean itself off energy imports from countries like Iran and Saudi Arabia, and instead ramp up domestic production from places like Pennsylvania.

“Gas-producing areas need to do their part to step up; and while President Biden and other world leaders are looking to countries like Iran and Saudi Arabia—countries that do not share our values—to increase production and make up the difference, they really should be looking to places like Pennsylvania,” Benninghoff said at a news conference on March 8.

Legislation to allow new drilling on state lands was made by Rep. Clint Owlett (R-Bradford/Tioga/Potter) who said production from those areas could be increased without disturbing the natural environment by siting well pads outside the preserved area and extracting gas by sub-surface horizontal drilling.

Revenue generated from leasing subsurface rights would “most importantly put us on a path where we as a country are not relying on Russian gas,” Owlett said in a statement on March 7.

The next day, President Joe Biden signed an executive order banning the import of oil, liquefied natural gas and coal from Russia to the United States.

Jason Gottesman, a spokesman for House Republicans, denied that Biden’s order undermined the GOP proposals. He argued that the order doesn’t have the force of law, and could be changed by the current executive or the next one. He said Pennsylvania is a victim of years of federal energy policy that has “deprioritized” domestic energy production, but the state now has the potential to make up a shortfall.

“Pennsylvania has the ability right now to once again invest in and export freedom by being a leader in American energy independence, which makes our country and our allies more secure by no longer needing to be reliant on countries like Russia and other geopolitical actors that do not share our values to heat our homes and fuel our cars,” Gottesman said.

Wolf accused the GOP of trying to use the Ukraine crisis to meet longstanding demands from the gas industry. Although he supports bipartisan moves to cut Pennsylvania’s financial ties with Russia, he issued a statement dismissing the plans to boost gas production as “simply ​natural gas industry giveaways.”

The Marcellus Shale Coalition, a trade group for the gas industry, did not respond to a request for comment.

Other measures proposed by lawmakers included one from Rep. Jonathan Fritz (R-Wayne/Susquehanna) who highlighted a bill urging the Delaware River Basin Commission to end its ban on fracking in the basin that covers parts of four states, including eastern Pennsylvania. The DRBC is a federal/state government agency responsible for managing the water resources within the 13,539 square-mile river basin.

And Rep. Stan Saylor (R-York) introduced a resolution that would urge the governors of New York and New Jersey to allow construction of natural gas pipelines so that Pennsylvania gas could reach markets in New England, which Saylor said have been “walled off” by anti-pipeline policies in those two states.

Analysts said there was little prospect of New York and New Jersey allowing new gas pipelines, given their pursuit of clean-energy goals, New York’s ban on fracking beginning in 2014, and a decision last year by the PennEast company to end a controversial plan to build a natural gas pipeline from Luzerne County to central New Jersey.  That project faced strong community opposition, especially in New Jersey, and was withdrawn after seven years on the drawing board.

“I don’t think a resolution urging New Jersey and New York to change their own energy policy that they adopted for whatever reason is going to have any impact,” Hess said. And he argued that any policy change by the DRBC would require the unlikely approval by the governors of all four basin states – all Democrats – as well as from the federal government.

Matthew Bernstein, senior analyst for shale exploration and production at Rystad Energy, a Norway-based research firm, said lifting the ban on new drilling under state lands would do nothing to boost production because output is restrained by a shortage of pipeline capacity.

“The main issue surrounding increasing production in Pennsylvania is not a lack of land to drill, but rather a lack of the necessary takeaway capacity to bring the gas to market,” he wrote in an email. “No material increase, with or without lifting the ban, is possible in the short-term, and is then dependent on whether future pipelines taking gas out of the basin come online.”

Rystad projects Pennsylvania gas production will remain flat in 2022 because drillers are already producing as much as they can, regardless of the market price, given transmission restraints.

John Walliser, a senior vice president at the nonprofit Pennsylvania Environmental Council, said current gas production is restrained by the industry itself, and not by a shortage of land to drill on.

“There was so much gas being produced that it drove prices down,” he said. “There were questions from the investment side on whether they were getting the return they wanted. I’m personally not of the mind that what’s holding back the industry at the moment is regulation.”

Pa. Republican lawmakers and the U.S. Capitol attack
As part of WITF’s commitment to standing with facts, and because the Jan. 6 attack on the U.S. Capitol was an attempt to overthrow representative democracy in America, we are marking elected officials’ connections to the insurrection. Read more about this commitment.
Reps. Benninghoff and Owlett supported Donald Trump’s 2020 election-fraud lie by signing a letter urging members of Congress to object to Pennsylvania’s electoral votes going to Joe Biden. The election-fraud lie led to the attack on the Capitol.