Robert Campbell was a PES Refinery lab tech before being laid off in June. He was recently hired as a truck driver.

Many former employees had to switch careers. A considerable number remain unemployed. 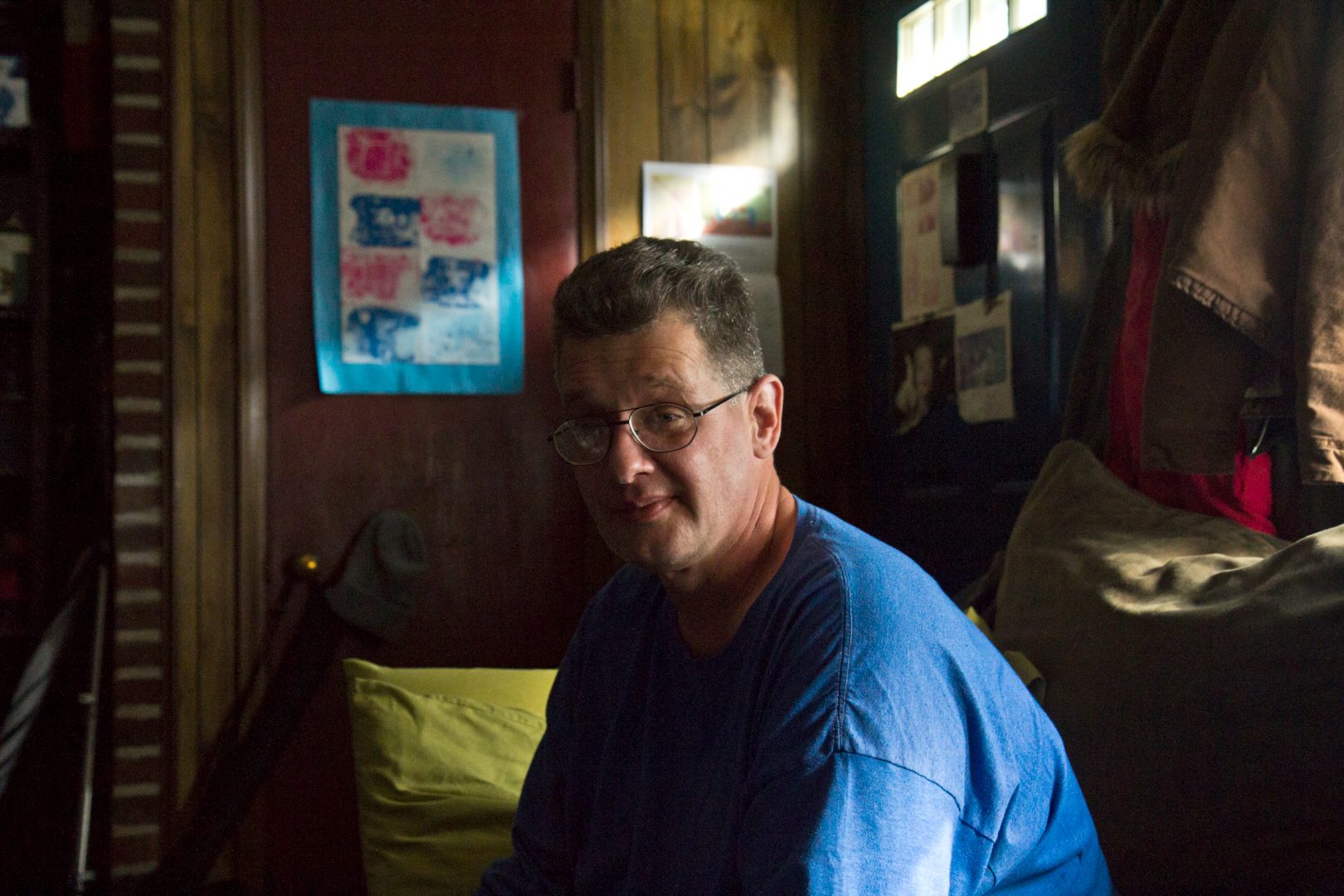 Robert Campbell was a PES Refinery lab tech before being laid off in June. He was recently hired as a truck driver.

He had a well-paying union job as a laboratory technician at the Philadelphia Energy Solutions refinery complex. He’d started there 20 years ago as a petrochemical inspector under contract, becoming staff five years ago. He loved the work, considered his coworkers family, and enjoyed the solid paycheck.

That all changed six months ago, with the early morning explosion and fire at the refinery in June. A week after the blast, PES announced the South Philadelphia complex was shutting down. Campbell and about 1,000 others were laid off. It’s taken him until now to get a new job.

“I’m definitely nervous. I’m scared, I’m 50, it’s a new … I never thought I’d be driving a truck,” he said recently, days before leaving for an orientation process with a trucking company in Iowa.

Like Campbell, many of the refinery’s former employees had to switch careers. A considerable number remain unemployed. Those who found similar jobs at refineries either lost their seniority or had to relocate their families to places such as Pittsburgh, New Orleans or North Dakota.

“Nobody is making the kind of money that we were making,” Campbell said.

At 4 a.m. Friday, June 21, a large amount of propane and a smaller amount of highly toxic hydrofluoric acid leaked from a unit at the refinery — likely through a faulty pipe that hadn’t been inspected in 45 years, according to an October report by the U.S. Chemical Safety and Hazard Investigation Board. The flammable chemicals ignited minutes later, causing a massive fire that burned for over 24 hours. The fire released a gigantic black plume of smoke and caused three explosions that could be heard throughout the city.

The last blast, the largest, shook nearby homes, woke many people inside them, and propelled a 38,000-pound vessel across the Schuylkill River and two smaller ones onto the refinery property. A control room operator, Barbara McHugh, activated a system that removed most of the deadly hydrofluoric acid from an alkylation unit, the Chemical Safety Board report said, preventing what could have been a major catastrophe affecting hundreds of Philadelphians.

A month after the fire, PES filed for Chapter 11 bankruptcy for the second time in two years, arguing that the fire had destroyed 57% of the refinery’s capacity, leaving it inoperable and in need of rebuilding. Laid-off employees received no severance pay or extended medical benefits, while company executives got about $4.5 million in retention bonuses. PES is taking bids from parties interested in buying the complex, and its future owner could be decided in a closed auction on Jan. 17.

The company is expecting a $1.25 billion insurance payout, but so far it has received only $50 million. Insurers have indicated they will make a second payment of $15 million from PES’ property policy, according to court documents. Without the full payment, the company could be forced into liquidation.

Choosing to move on

Campbell said he couldn’t sit and wait. So he took what he could get. He filed for unemployment compensation and Medicaid in June, and started looking for a job with the help of state and city agencies assisting the former refinery workers.

By Labor Day, he had sent about 300 resumés but had gotten only two interviews. His savings were thinning out. His wife didn’t have a job, and they had a mortgage and private school tuition to pay. Campbell said he tried “anything and everything.” He even told his 11-year-old son, Robert Campbell 10th, they might need to move away from his cousins and sixth-grade classmates.

But then finally, in December, after graduating from a truck driving program in Essington, Delaware County, and getting a commercial driver’s license, he landed a job with TMC Transportation.

“They were the best choice for me, I mean, I’ll be away from home four to five days a week. But they have weekends off.”

Campbell chooses to see the cup as half-full. He’ll be making about half what he was making at the refinery, considering overtime. His driving area will be from Florida to Maine, from Texas to the East. But he said that the job has really good benefits, and that he could start making more after a year. Plus, he said, lately unemployment was just taking the joy out of everything. Little things like buying new music for his collection or a special treat for his son reminded him that there was little left of his savings. The fear of never getting another job was only creeping up.

Alex Clowes considers himself very lucky: At 53, it took him only three months to be back at work. But that time was very stressful, he said. Two years ago, he had completely renovated his house in Delaware and didn’t want to relocate. He had worked at the South Philadelphia refinery for 29 years and didn’t want to switch careers and it was hard to compete with 1,000 other former PES employees.

By the end of September, he had been hired by Monroe Energy, at a refinery run by Delta Air Lines in Trainer, Delaware County.

“As soon as I heard I got hired, I was actually in tears. My mom happened to be visiting at the time — it was great news,” Clowes said. 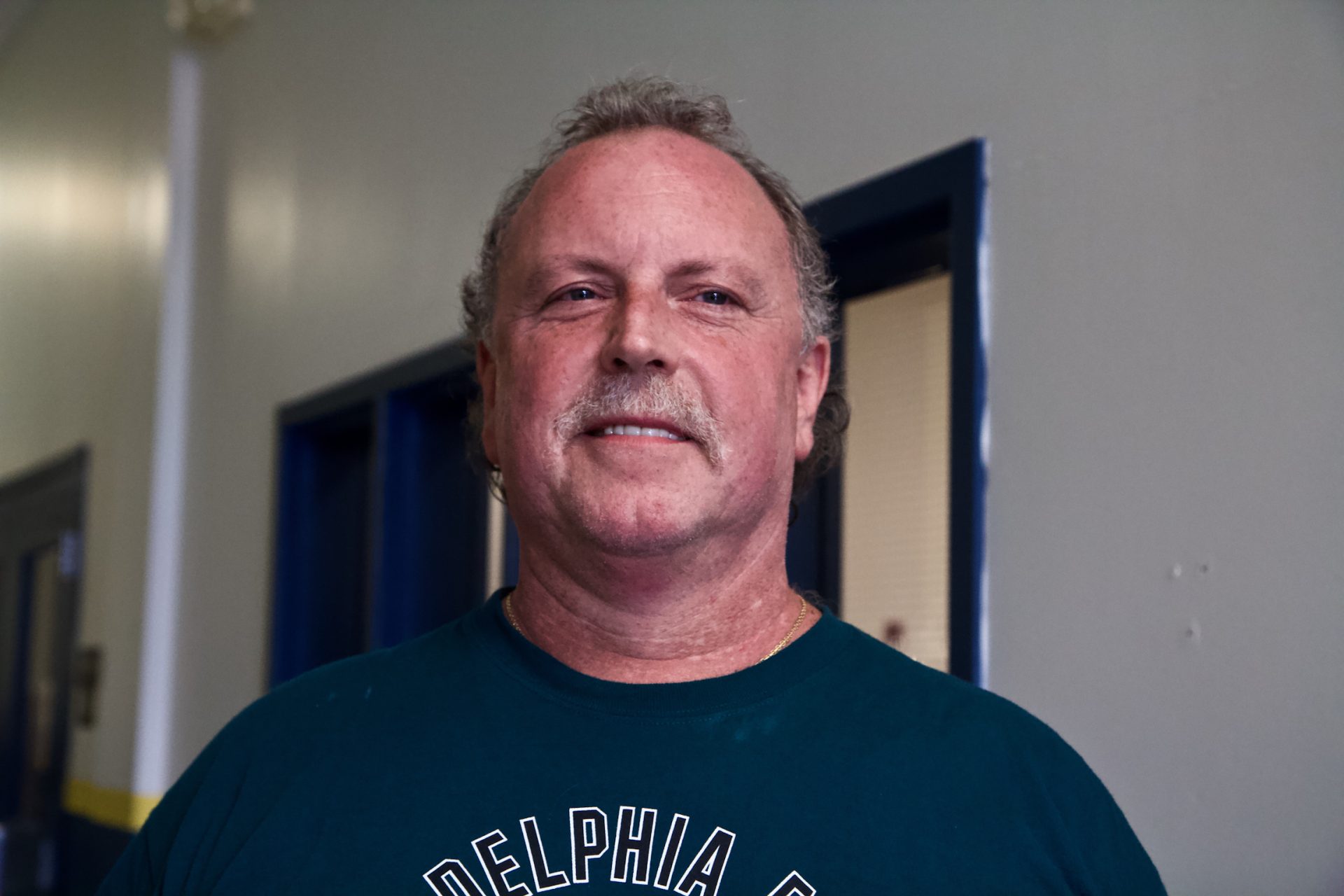 Alex Clowes worked at the PES for 29 years. As a member of USW 10-1, Clowes says the loss of jobs will have a ripple effect on the economy of the area.

He’s gone from head operator at PES of a fluid catalytic cracking unit, which converts crude oil into gasoline, to trainee operator on a unit at Monroe. And although his paycheck is smaller now, he’s closer to home, has better benefits, and he’s still in a union.

“It’s a good culture, it’s family-oriented, and this company actually seems to care about you, the employee. That’s what I like about it. A lot different than it was … where we were at,” he said. “They’re concerned about the individual, you’re not just a number.”

Richard Gudz also landed on his feet fairly quickly, although not at a refinery. After 17 years as a unit head operator, he’s transitioning into a job in government that has nothing to do with oil, but pays equivalently. He’s 51, married with four kids, and lives in North Philadelphia.

“I personally feel very fortunate,” he said, “[but] I do feel there’s a loss.”

Richard Gudz, a former refinery employee speaks as members of the city’s Refinery Advisory Group listen to academic and environmental experts during a meeting regarding the future of the site of Philadelphia Energy Solutions.

Like other former refinery workers, Gudz misses the community and camaraderie he found among them after years spending every day, every night shift, and every holiday with one another.

“There are some [former coworkers] that are making less than half the pay that they were making. There are some that haven’t found anything,” he said. “I feel really bad.”

Yet Gudz doesn’t blame the refinery for that loss. Nor does he blame PES for not inspecting the old pipe that corroded to be thinner than half a credit card over 45 years and led to June’s avoidable explosion. On the contrary, he said he’s frustrated with the bankruptcy process that started in July and, in his view, is moving too slowly.

“I’m concerned about the refinery kind of wintering in place. If there’s somebody who’s interested and willing to purchase it and run it as a refinery, I think they should have the opportunity to have gotten it more quickly,” Gudz said.

What lies ahead for the refinery?

Philadelphia Energy Solutions got court approval for its restructuring proposal on Dec.11, Law360 reported. That came despite an objection lodged by the U.S. Trustee’s Office, the Justice Department’s bankruptcy watchdog, because the proposal does not include such basic data for creditors as how much it owes, what it will become, or how much creditors can expect to receive.

The Environmental Protection Agency also has objected to the plan because it does not provide information on how PES would comply with ongoing obligations under the Clean Air Act‘s Renewable Fuel Standard program stemming from a settlement during the company’s last bankruptcy in 2018.

“Bankruptcy is not an avenue for noncompliance with the law or a safe haven for lawbreakers, and debtors must comply with their obligations under environmental law and the consent decree,” the EPA’s objection filing with the bankruptcy court says.

In a reply filed with the court, PES said it will send a disclosure statement to creditors with the missing information when the sale process is done, and that it will provide information to EPA when the plan is confirmed. U.S. Bankruptcy Judge Kevin Gross has pushed the confirmation hearing to Feb. 6 to give creditors more time to review the plan after PES sends the missing data.

According to the company’s reply filing, the case is costing PES $15 million per month in administrative expenses.

In “A Close Call and an Uncertain Future: An assessment of the past, present, and next steps for Philadelphia’s largest refinery,” a report released last month, the City of Philadelphia recommended a cleaner use for the refinery’s site in the long term, but said it has limited control over the future of the complex. Residents, environmentalists and experts, including labor leaders, have recommended that City Council regulate future use of the site to protect public safety and health.

“If you’re totally against the refinery reopening, I get it. If you saw that on TV, you know what? I totally understand you not wanting that place next to your house,” he said.

What Campbell can’t understand is the lack of regulation of corporations such as PES.

“They could have continued operating, kept everybody employed, and then sold the place. But they chose not to do that,” he said. “They saw the easy out and took it, and that, I feel it was immoral.”

If the refinery were to reopen under the right management, he would go back in a minute, Campbell said. He misses the people as much as he misses the job.

For now, though, he’s sticking to his plan, hoping that things get better.