Sinkhole opens up along ME2 route in Delaware County; no leaks or injuries

Sunoco says hole has been filled and pipeline operations continue 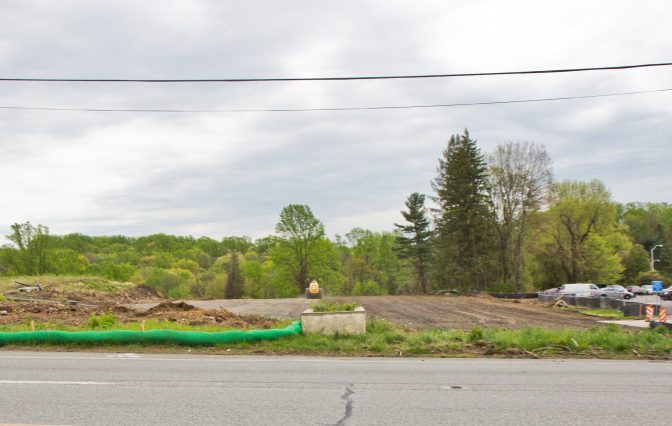 Sunoco said a sinkhole near the state police barracks in Middletown, Delaware County was filled after it opened on Wednesday. The Public Utility Commission said its Bureau of Investigation and Enforcement has launched a safety investigation.

A sinkhole opened up on Wednesday along a Sunoco pipeline route in Middletown, Delaware County, state, county and township officials said.

The sinkhole – called a “subsidence” by the Public Utility Commission – was in the right-of-way for a 12-inch pipeline that is part of the Mariner East system to carry highly volatile natural gas liquids and petroleum products, the PUC said in a statement late Wednesday.

No leaks or injuries were reported, and Sunoco officials have been working to “stabilize and monitor” the situation, the PUC said. The regulator said its Bureau of Investigation and Enforcement has launched a safety investigation.

Earlier this week, Sunoco restarted the Mariner East 1 pipeline which had been shut down for three months because another sinkhole exposed a section of the pipe on a construction site at Lisa Drive, a suburban development in West Whiteland Township, Chester County.

Sunoco confirmed that the new sinkhole had opened up but said Thursday morning that the hole has been filled and that there was no interruption to pipeline operations.

“A subsidence feature did occur yesterday along our right of way,” said Vicki Granado, a spokeswoman for Sunoco’s parent, Energy Transfer. “The appropriate regulatory agencies were notified and an investigation determined our pipelines in the area are safe and secure. Nothing was exposed. The area was immediately contained and grouted. We placed our personnel in the area to continue to monitor the area. Our pipelines remain in service.”

The incident was the latest to hit Sunoco during the troubled Mariner East construction, which began in February 2017. The project has been bedeviled by drilling fluid spills, contaminated aquifers and sinkholes, has prompted millions of dollars in fines for environmental violations, and has been shut down several times by regulators because of safety concerns.

After rising criticism from community groups, some lawmakers, and this year from Gov. Tom Wolf, the company acknowledged in February that it had made “mistakes” that would not be repeated.

The hole measured about 12 feet deep by 12 feet wide and 12 feet long, and was in front of a barracks occupied by Pennsylvania State Police, according to a statement from Middletown Township on Wednesday.

The township said the affected area is at the end of a horizontal directional drill being used in construction of the new Mariner East pipelines – Mariner East 2 and 2X.

“Investigation into the subsidence is ongoing; an environmental engineer was on site and advised flowable fill was to be used to repair the subsidence,” the township’s statement said.

Township manager Andrew Haines said that the sinkhole was across the street from Granite Run Farms, a senior residential center, but said there was no risk to residents’ safety.

“We do not have any emergency concerns for any of our residents at this time,” Haines said in an interview.

Opponents of the Mariner East project say it represents a grave risk to public safety, especially in densely populated areas like Delaware County, because any leak of natural gas liquids could cause a deadly explosion.

Sunoco decided last year to use the 12-inch pipeline, first built in the 1930s, as a temporary part of its Mariner East 2 line because new construction at some places in Delaware and Chester Counties had not been completed. Critics said repurposing the old line fanned safety concerns because of its history of leaks, most recently in June 2018 when it leaked some 30,000 gallons of gasoline into Darby Creek near Philadelphia.

Timothy Boyce, director of Delaware County Emergency Services, said Thursday that the new hole had been filled and there was no risk to public safety.

“At no time was there ever reported any danger from it,” Boyce said. “It was in a grassy area so there was no property damage, and we never received reports that the pipelines in the area were exposed or undermined.”

Mariner East 2, which carries natural gas liquids to a terminal at Marcus Hook in Delaware County, began operating on Dec. 29, 2018.

Life along the Delaware: Seeing the river from Camden, and acting for its betterment and ours