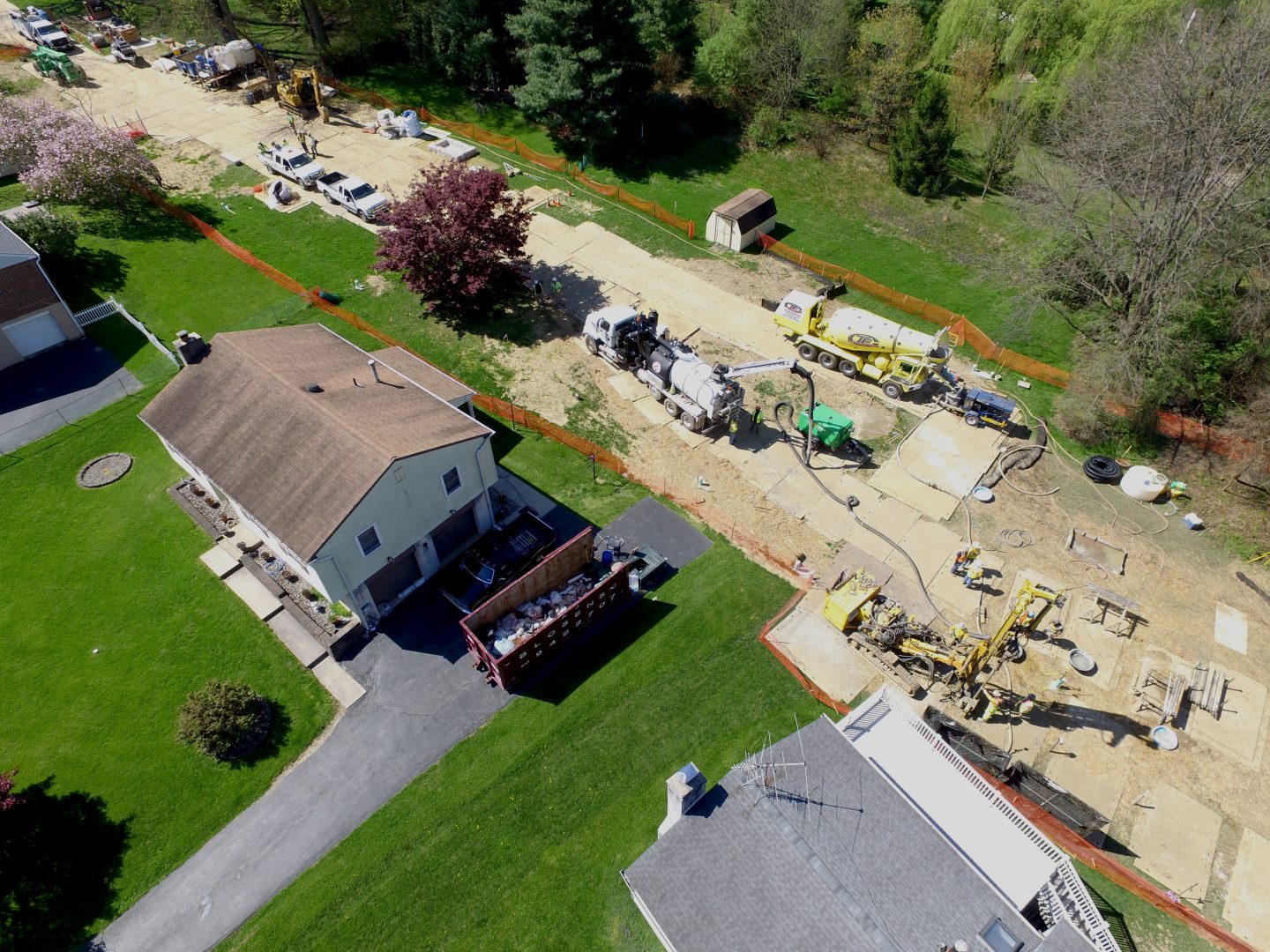 Sunoco said Tuesday that the Mariner East 2 pipeline, planned as a cross-state 20-inch line, will initially consist of joined-up sections of 12-, 16- and 20-inch pipe. The hybrid pipe is expected to be in service “shortly,” and will carry natural gas liquids until the 20- and 16-inch pipes are completed, the company said. It said last week that the 20-inch and 16-inch pipes are scheduled for completion by the end of 2020.

Asked by StateImpact whether the company now considers the hybrid pipeline to be Mariner East 2, spokeswoman Vicki Granado said: “At this time, yes. This is a temporary solution to get ME2 into service.”

Sunoco said Monday that it plans to put Mariner East 2 in service “shortly,” despite a company spokeswoman’s statement last week that the 20-inch line would not be finished until 2020.

A notice on the company’s marinerpipelinefacts.com website says “there has been no change to the initial in-service date” for Mariner East 2. Sunoco has not publicly released an in-service date for the line. It says ME2 will be in service as soon as it is “mechanically complete.”

In an email last week, StateImpact Pennsylvania reporter Jon Hurdle asked Sunoco questions about the status of horizontal directional drilling at several ME2 sites. In the following exchange, Mariner East 2 is the 20-inch pipe referred to:

Question: “Also, if sections of the 16-inch pipe are now being used to get ME2 in service, how will it eventually be used for ME2X?”

Lisa Dillinger, Sunoco spokeswoman: “As we continue to finish constructing both ME2 and ME2X, we will be able to put the next segment into service by the end of Q3 2019, continuing to use a combination of 12-, 16- and 20-inch pipe. Then we will be able to complete both pipelines, fully 20-inch and fully 16-inch, in Q4 2020.”

Sunoco has declined to answer repeated questions from StateImpact Pennsylvania to clarify that statement.

Sunoco said late Wednesday it will begin to pump natural gas liquids across the state by joining three new and existing pipes because its long-delayed Mariner East pipeline project won’t be ready for another two years.

The company pushed back the anticipated completion date for the Mariner East 2 and Mariner East 2X pipelines again, this time until the end of 2020 — another major delay to the project that is already at least 18 months behind its original schedule. Sunoco missed its last startup target of the end of September, citing “regulatory issues.”

Because of the delay, the company will now use completed sections of new 20-inch and 16-inch pipelines, plus part of the 12-inch pipeline in Chester and Delaware counties, to carry NGLs to a terminal at Marcus Hook near Philadelphia, where most of the material will be exported.

The Public Utility Commission said it does not need to approve specific projects such as the new hybrid pipeline, but that its pipeline safety division ensures compliance with state and federal safety regulations during construction and operation.

“The PUC’s independent Bureau of Investigation and Enforcement will not hesitate to act, with formal complaints or petitions for emergency action, when safety concerns are identified,” said PUC spokesman Nils Hagen-Frederiksen.

Company spokeswoman Lisa Dillinger declined to disclose the capacity of the hybrid line, and did not say when it would start to operate, but said the original planned capacity for Mariner East 2 was 275,000 barrels a day.

By using a combination of pipes rather than just a 20-inch pipe for Mariner East 2, as originally planned, Sunoco acknowledged that it will have less capacity than it intended, at least to begin with. But it said it will be able to meet initial customer orders.

“There will be enough capacity to meet our initial customer agreements,” Dillinger said in an email to StateImpact late Wednesday.

The new plans may represent the biggest disruption so far to the cross-state project that has already been beset by technical, environmental and legal challenges since it began construction in February 2017. Regulators and courts have shut down all or parts of the construction at different times because of dozens of spills of drilling fluid and concerns about public safety.

The multi-billion dollar project has continued to generate notices of violation from environmental regulators, as recently as Oct. 16, despite the shutdowns and a $12.6 million penalty earlier this year. The continuing violations fuel opponents’ claims that the project endangers public safety by risking explosions of NGLs in densely populated areas.

Sunoco says its pipelines are safe, and meet or exceed all state and federal regulations. The company reported the industry’s second-highest number of pipeline incidents to federal regulators from 2006 to 2018, according to data from the Pipeline and Hazardous Materials Safety Administration.

As for Sunoco’s planned use of the 12-inch line, which was built in the 1930s, Dillinger did not immediately respond to a question on whether it can safely carry natural gas liquids.

The Pennsylvania Alliance for Energy, which advocates for pipeline infrastructure, said regulators have ensured that the Mariner East project will operate safely.

“Every facet of this project has been and continues to be scrutinized by regulators, so that when it finally goes into service residents can know it was developed safely and according to stringent requirements,” said Kurt Knaus, a spokesman for the group.

The 12-inch line has a history of leaks, most recently of 33,000 gallons of gasoline into a creek near Philadelphia, and is the focus of growing concern by pipeline opponents that it will leak again, perhaps in densely populated areas.

Del-Chesco United for Pipeline Safety, a community group in Delaware and Chester counties, noted safety risks in its response to Sunoco’s change of plan and said:

“Sunoco’s latest improbable plan, to cobble together sections of an ancient pipe that’s leaked multiple times in Delaware and Chester Counties is unlikely to reassure either impacted communities or investors.”

Other critics said the new delay is another sign that Sunoco can’t be trusted to deliver on its promises.

“This latest development proves why this operator continues to struggle to convince the public that they can be trusted with the lives of landowners and neighbors along the pipeline,” Rich Raiders, a Reading-based attorney who has represented some landowners in eminent domain cases against Sunoco. “The company and its shippers would be better served by standing down pending a comprehensive review of this entire project with participation of all stakeholders.”

The risk to the public is now reduced by the fact that the 20- and 16-inch pipes won’t be fully operational for at least a couple of years, said Eric Friedman, a member of Del-Chesco United. But he said the current operation of Mariner East 1 already raises the chances of a leak or explosion, and that would increase if the 12-inch pipe goes into operation.

ETP’s Dillinger did not respond to questions on the reasons for the new delay and whether the 12-line is a safe way of carrying NGLs.

When it missed its end-of-September deadline for starting up the pipeline, the company did not specify the regulatory issues that it still faced.

But the PUC said at the time that unresolved matters included a PUC injunction that blocked construction at two sites in West Whiteland Township, Chester County; an investigation into a strike on ME2 by a water contractor in Delaware County in May; and a joint state-federal investigation into allegations that some weld inspections had been falsified.