This photo taken on July 11, 2012, shows the Marcus Hook Refinery in Marcus Hook, Pa. The facility, which is owned and operated by Sunoco Logistics, is an international hub for natural gas liquidspropane, ethane, and butanefrom the Marcellus Shale region of Western Pennsylvania. Sunoco Logistics is spending roughly $2.5 billion on the Mariner East projects, which will connect the western part of the state to the port at Marcus Hook.

Sunoco wants to create a terminal for natural gas liquids 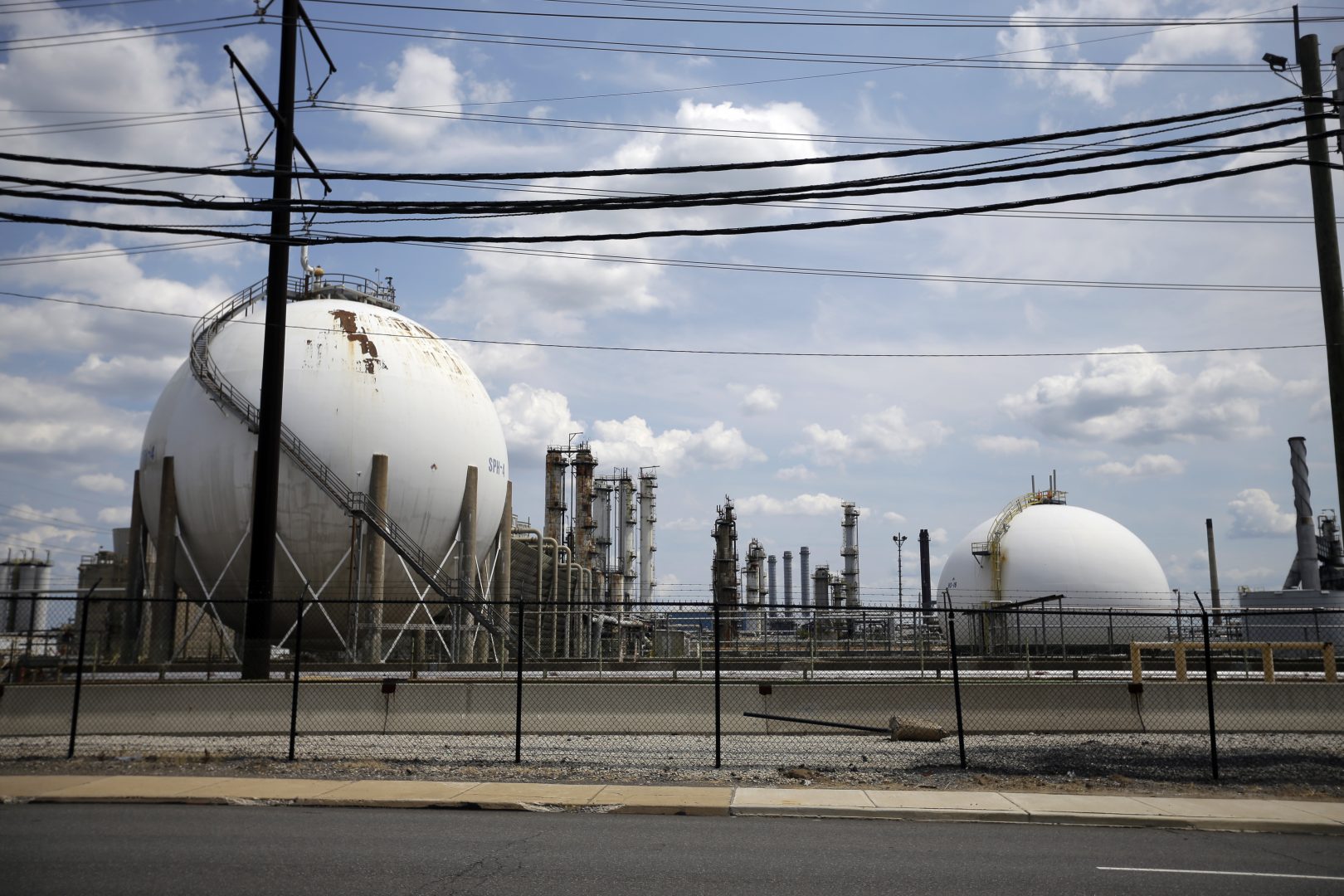 This photo taken on July 11, 2012, shows the Marcus Hook Refinery in Marcus Hook, Pa. The facility, which is owned and operated by Sunoco Logistics, is an international hub for natural gas liquidspropane, ethane, and butanefrom the Marcellus Shale region of Western Pennsylvania. Sunoco Logistics is spending roughly $2.5 billion on the Mariner East projects, which will connect the western part of the state to the port at Marcus Hook. 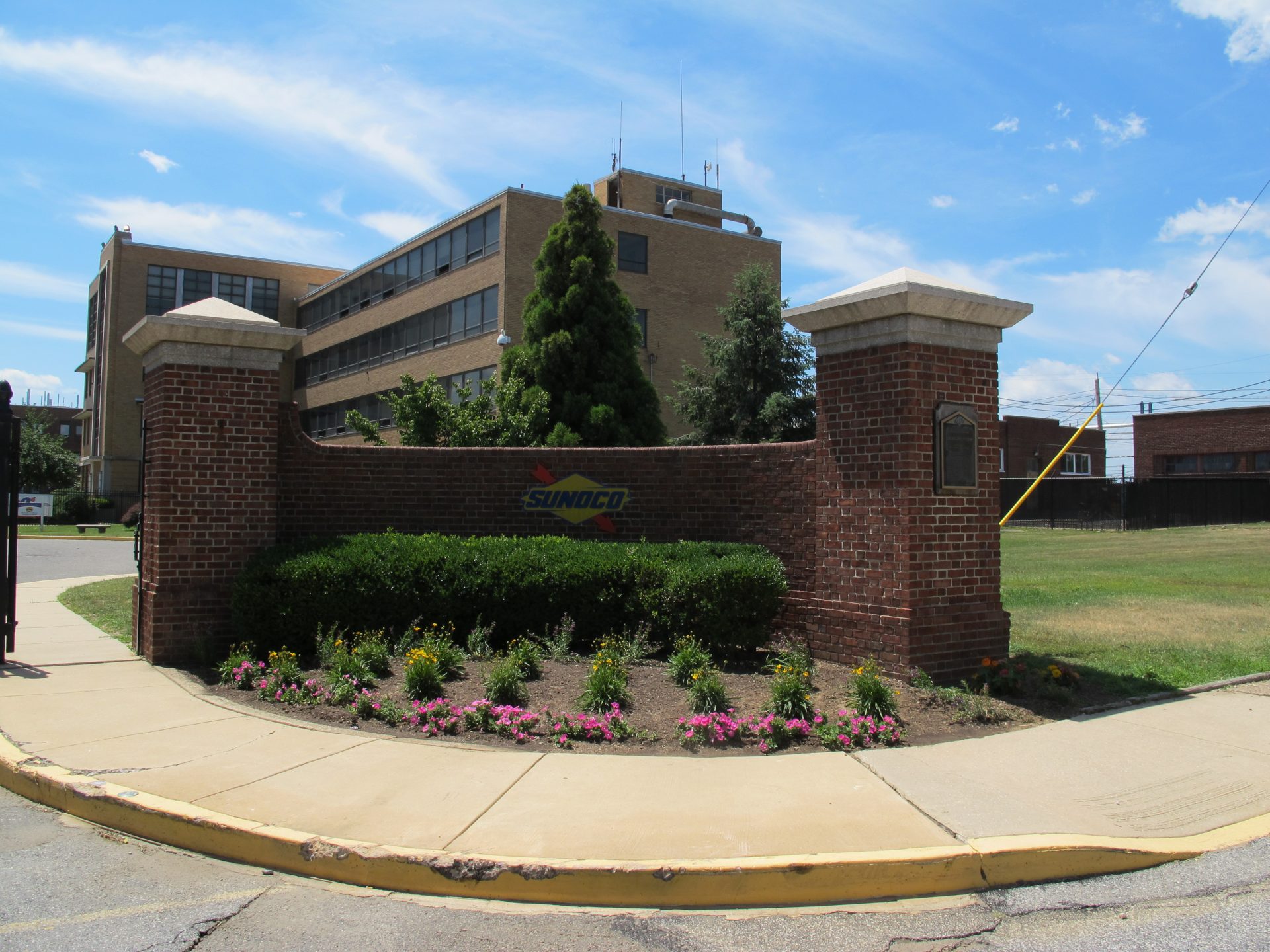 The entrance to Sunoco’s refinery in Marcus Hook, Delaware County.

It was jobs versus environmental concerns on Tuesday night at a public hearing held by the Department of Environmental Protection at a community center right next to Marcus Hook Industrial Complex in Delaware County.

The room was packed and the audience polarized between those asking the DEP to approve the permits needed for the former oil refinery to become an energy terminal for natural gas liquids coming from Sunoco Partners Marketing & Terminals’ Mariner East 2X pipeline, and those who want the agency to reject its air quality plan.

The plan would need to be approved for Sunoco to construct and operate two new 600,000 barrel ethane storage tanks, a new air-assisted cold flare, refrigeration and dehydration systems and other infrastructure needed to expand its ability to process ethane.

Edward Human, director of operations at Marcus Hook, said the project will create hundreds of construction jobs over three years, new permanent jobs and an additional $5 million dollars yearly in property tax for the Marcus Hook borough, creating the economic boost needed after the oil refinery almost closed in 2011.

“There will be very limited increase of emissions overall from this project with essentially zero new sulfide dioxide emissions,” Human said. “Much like natural gas, natural gas liquids such as ethane and propane are clean burning fuels.”

Eve Miari from the Clean Air Council argued Sunoco’s permit application fails to address potential incremental emissions, such as sulfide dioxide, Volatile Organic Compounds emissions, and pollution estimates for emergency flaring, and that the DEP should require a way to quantify those before granting the permit. Miari also accused Sunoco of avoiding additional levels of review and technology requirements established by the Clean Air Act for new projects, by segmenting its application in several parts.

“Circumventing regulations is not something Sunoco does by chance, (it) is a continual, intentional strategy to maximize profit and undermine the rights of the citizens of Pennsylvania,” Miari said in her testimony. “This is an export pipeline for plastics manufacturing in Europe, yet Sunoco has managed to have it classified as a public utility, circumventing local, municipal and zoning regulations, and usurping the police powers of our local townships.”

The oral comments in opposition to the project came from about a dozen residents, most of whom came from out of town — Media, Middletown, Glen Mills, Lebanon. They argued that the project would put their health and the environment at risk. Air pollution and higher rates of asthma were a big concern, and many of the testimonies noted that the American Lung Association rated Delaware County with an “F” for air quality in its latest State of the Air report.

Others, like Rosemary Fuller from Middletown Township, said the DEP should reject the permit based on Sunoco’s track record on violations and pollution of drinking water during the ongoing Mariner East pipeline project.

“Come on, wake up everybody!” Fuller said. “Sunoco is an incompetent and non-complying company that should not be given more permits to continue operating.”

Sunoco did not respond to a request for comment. In February, when the company was allowed to resume work following a $12.6 million civil penalty from the Department of Environmental Protection for permit violations related to its Mariner East 2 pipeline project, a Sunoco spokesman said “safety is paramount” for “communities in which we work and operate” as well as for employees and the environment.

Asking the DEP to approve the Marcus Hook permit were representatives from boilermakers, engineers, electrical workers, carpenters, steamfitters and other unions, plus construction companies and the local school district. They argued the project would bring economic and social improvements for the local community at zero risk.

“I keep hearing about the what ifs — what if this happens, what if this happens. That’s how America was built. And by doing jobs and making them safe,” said Jim Gallagher, business agent of Steamfitters Local Union 420 and a long time resident of Marcus Hook. “I’m so confident in how this works, my son is in this apprenticeship, two of my nephews are in this apprenticeship, my whole family… my grandfather, my father — we all run this business.”

Gallagher cited a report from Accufacts that concluded that Sunoco’s plans were safe, and said that closing Marcus Hook would only bring despair to a community that counts on these jobs to bring food to their table and to pay their mortgage.

“It’s way safer now than it was 20 years ago,” said Ernest Coter, from the Laborers’ International Union of North America Local Union 413, outside the hearing. “They shut it down in 2011, it was bad then, but now it’s way better. Safety wise, everything is better now. And it boosts the economy up. I just hope and pray they do give them the permits.”

Both said they work and live in the area and none of them, or their families, have respiratory problems.

“And of course I care, family first,” Coter said. “I’m not going to work somewhere that’s going to hurt me, number one, and contaminate my grandkids, number two. They do a lot of safety, they make sure everything is good around here.”

Lanasa Tyler, from Local 413, said he lived walking distance from a refinery and that everyone in his family is healthy.

“Water is good, everything… There’s still wildlife in the neighborhood,” Tyler said outside the community center. “You didn’t see many residents complaining about nothing, right in here in the Marcus Hook.”

DEP staff present at the hearing did not answer questions or comment. Virginia Cain, DEP’s Environmental Community Relations Specialist, said comments will be addressed in writing at the close of comment period on June 1.