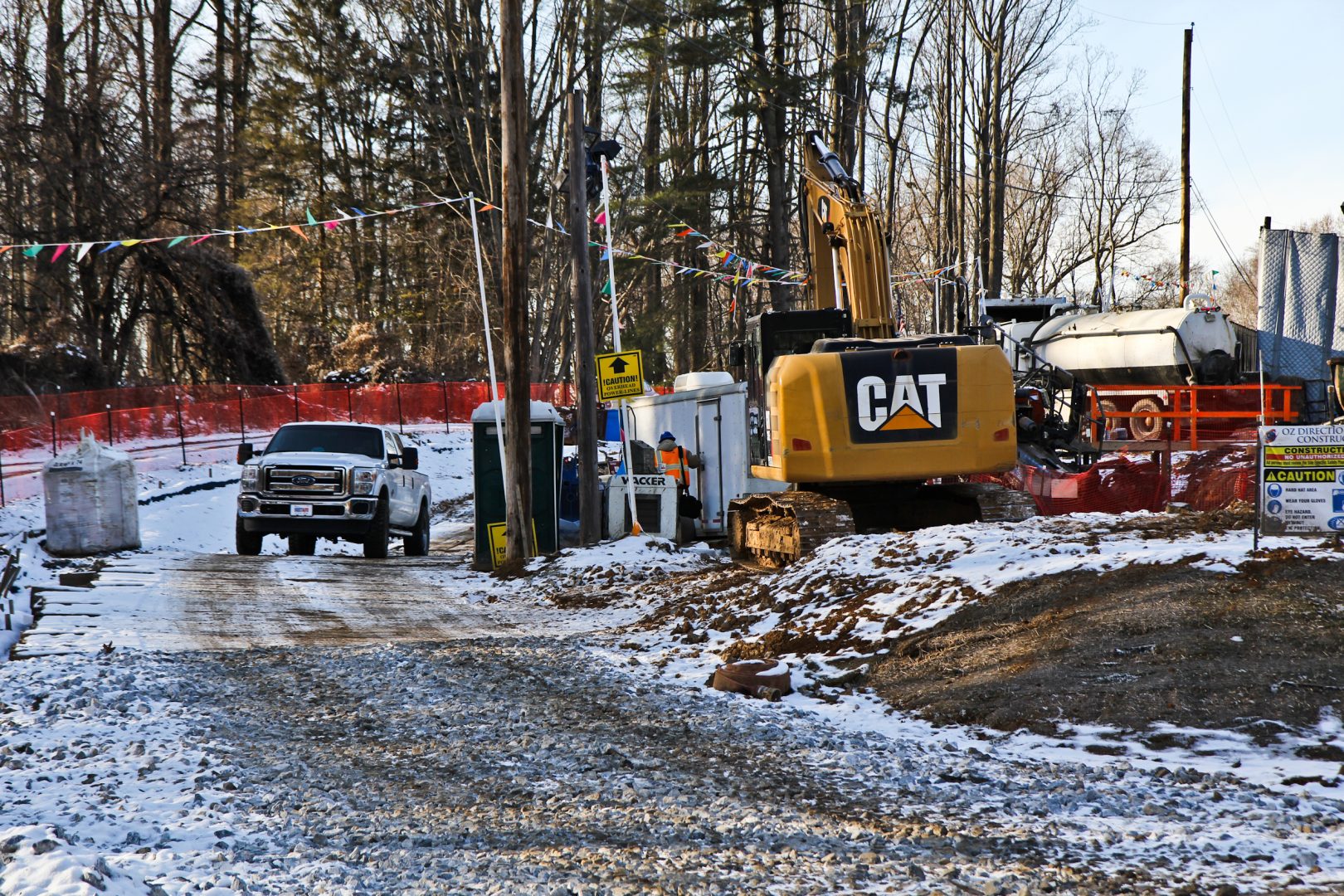 Mariner East 2 construction site in Edgemont Township, Delaware County. The federal pipeline regulator has issued a notice of probable violation to Sunoco after discovering flawed sections of pipe on a section of the route in Ohio.

A section of the controversial Mariner East 2 pipeline showed scrapes and a gouge in its coating during construction in Ohio last year, federal regulators said, in a recent statement that has fueled activists’ concern about the safety of the line.

The Pipeline and Hazardous Materials Safety Administration issued a “Notice of Probable Violation” to Sunoco Pipeline on Jan. 11 after an inspector discovered the flaws during a visit to the construction site near Hopedale, Ohio, near the western end of the pipeline route, in March 2017.

The inspector observed “numerous coating scrapes” on at least five sections of pipe, and several sections had “severe coating damage,” the notice said. At least one joint of pipe had a “gouge” that extended into the wall of the pipe.

The gouged joint was removed by Sunoco after it determined the damage had been caused by a bending machine on Nov. 18, 2016, some four months before the PHMSA inspection during the week of March 27-31, 2017.

PHMSA said Sunoco for failed to properly inspect the pipe-bending equipment, but it decided not to fine the company for the violation of federal pipeline regulations.

Any suggestion that the integrity of Mariner East 2 is being compromised during construction has fueled the fears of critics who say the pipeline represents a grave threat to public safety because of the highly explosive nature of the natural gas liquids that it will carry.

“It’s frightening to think about how many other instances of substandard construction there may be on Mariner East because a leak of hazardous, highly volatile liquids in a densely populated area could be a catastrophe,” said Eric Friedman, a member of the Middletown Coalition for Community Safety, an anti-pipeline group in Delaware County.

Friedman said the notice suggests that Sunoco was about to install the flawed pipe underground when the PHMSA inspection prevented that from happening.

“I interpret the [notice] as telling us that the PHMSA inspector happened on a scene of pipeline construction and installation, and that during his inspection of pipe that was being prepared for burial or was in the process of being buried, that he discovered damaged bends and damaged pipe sections,” Friedman wrote in an email.

The PHMSA report said its inspector found the flawed sections of pipe among “at least” five segments that were laid in a line in the pipeline right-of-way while pipe was being installed in a trench.

Darius Kirkwood, a spokesman for PHMSA, did not immediately respond to questions about whether Sunoco was about to bury the flawed sections of pipe when the inspector visited the Ohio site; how recently the agency has inspected the pipeline; or whether the gouged section of pipeline remained undetected by the company until the PHMSA inspector found it.

Friedman repeated his group’s call for Gov. Tom Wolf to conduct an assessment of any risk to public safety from the pipeline, which was due for completion in the second quarter of this year but whose schedule has been thrown into doubt by Pennsylvania’s decision in early January to halt construction.

The Department of Environmental Protection said it was shutting down work related to permits it issued in response to a string of violations stemming from incidents including spills of drilling fluid and disturbance of aquifers that supply private water wells. Some work, such as welding, has continued because the DEP only regulates activity that affects water crossings or earth disturbance.

Wolf has said that any statewide risk assessment would be done by the Public Utility Commission, which hasn’t yet said whether it would conduct one.

“The Commission continues to consider how to best address public concerns about pipeline safety, while also remaining focused on inspections and monitoring across Pennsylvania,” said Nils Hagen-Frederiksen, a spokesman for the PUC.

Since the start of 2016, PHMSA has issued notices of probable violation to Sunoco for five projects, including one in Texas that resulted in a fine of $1.28 million.

Sunoco spokesman Jeff Shields declined to say whether the pipeline flaws found by PHMSA in Ohio would have compromised the integrity of the line if they hadn’t been discovered by the PHMSA inspector; whether Sunoco had been aware of them before the inspector found them, or whether they raise questions about the integrity of the pipeline elsewhere on its 350-mile route across southern Pennsylvania.

“I would defer to the order,” Shields wrote in an email. “We have been coordinating with PHMSA to address any remaining issues.”

Richard Kuprewicz, president of Accufacts, said that it appeared that the Ohio incident was not too serious, since the agency did not impose a fine, and that Sunoco seems to have fixed the problem.

“It’s a year ago, they are not really getting too serious about it in the sense of escalating a major fine,” he said. “It signals to me that the company, in getting this called to their attention had an explanation that reached some satisfaction with PHMSA.”

But he said the notice won’t help Sunoco’s reputation with the Pennsylvania public.

“A pipeline operator does not need a notice of probable violation,” Kuprewicz said. “It doesn’t help the public’s perspective.”

Critics such as Del-Chesco United for Public Safety, a coalition of community groups in Philadelphia’s western suburbs, say the highly explosive nature of the natural gas liquids to be carried by the line could cause a disaster with many casualties if there is a leak in densely populated suburban areas.

In March last year, the Middletown group released an independent study saying that any NGLs escaping from a rupture in the line could be ignited by sparks from sources such as cell phones, door bells or light switches, and that anyone within 1,100 feet downwind of such a leak would suffer “serious burns.”