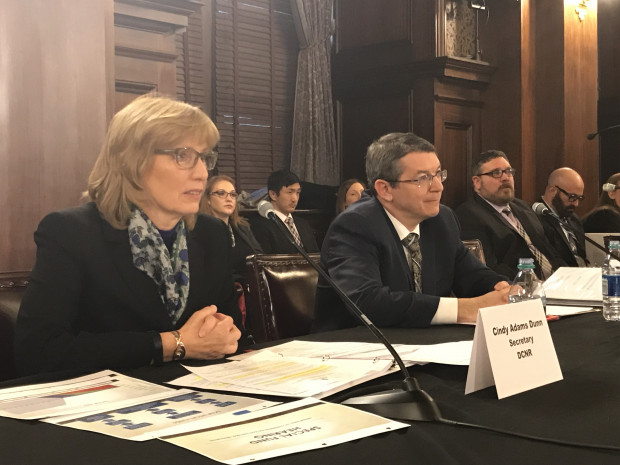 As state lawmakers keep looking for ways to plug an estimated billion-dollar hole in Pennsylvania’s budget, they are scrutinizing state agencies’ use of special funds, which include money to promote environmental programs.

At a House Appropriations Committee hearing Thursday, legislators quizzed Patrick McDonnell and Cindy Dunn, who lead the state Department of Environmental Protection and Department of Conservation and Natural Resources, respectively.

The special funds include things like cleaning up industrial sites and promoting recycling.

Last fall, House Republicans sought to use $450 million from state agencies’ special funds to help balance the budget. Although the attempt failed, the money is viewed as a potential surplus that could be diverted into the state’s General Fund.

Rep. Curtis Sonney (R- Erie) said he’d like more transparency from DEP and DCNR about how the special fund money is being committed.

“Anybody, when they see those fund balances, and see rather large sums of money in them—everybody’s gonna have that, ‘What the heck?’ moment,” he said.

McDonnell, who previously called the GOP plan a “raid” on the funds, told legislators that much of the money has to be used for specific purposes.

Rep. Fred Keller (R-Snyder) asked whether the agencies were auditing the funds to ensure money is being spent properly.

“Yes, each of the funds has a statutorily-derived purpose,” McDonnell replied. “Some of these funds are operational—so it’s to manage, for example, the oversight of the hazardous waste program.”

“Could we get the results of the audits of all these funds?” Keller asked. “I want to make sure the money we’re spending—that we’re achieving the goal of what we want to do. I’m not saying we are or aren’t. I just want to see the data on that.”

The House Appropriations Committee is also examining the use of special funds at PennDOT and the Department of Community and Economic Development.