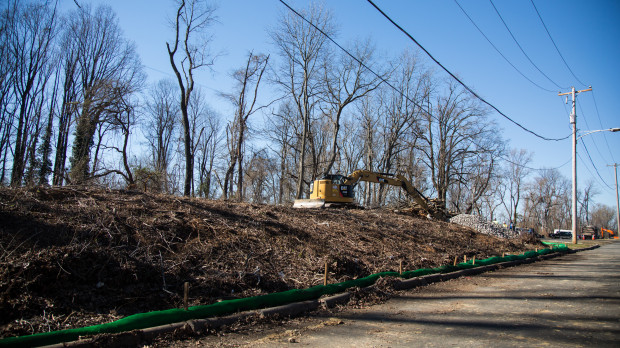 Opponents of the planned Mariner East 2 pipeline warned on Monday of an “unprecedented catastrophe” if the pipeline leaks, subjecting residents of a Delaware County township to the risk of burns from a flammable vapor cloud that could ignite amid schools, homes and businesses.

The Middletown Coalition for Community Safety, an anti-pipeline group, released an independent study saying that any explosion of natural gas liquids from the line could inflict serious burns on anyone within 1,100 feet of a leak.

The study was the latest to quantify the risks associated with Sunoco Logistics’ plans to pump ethane, propane and butane at high pressure some 350 miles from the Marcellus Shale of Ohio and southwest Pennsylvania to an export terminal at Marcus Hook, near Philadelphia.

Some Middletown residents have been fighting the pipeline plan for years on the grounds that it might expose people to burns or choking if there was a leak in that densely populated area of Philadelphia’s western suburbs.

The new data from an independent risk-analysis firm calculates the risks faced by residents, based on specifics such as the nature and volume of the natural gas liquids to be carried by the line, the pressure at which they will be pumped, and the likely weather conditions that would affect the spread of any escaping materials.

The study assumes that the pipeline suffers a “catastrophic rupture” near an elementary school which is about 650 feet from the proposed pipeline route.  Residents in the coalition have been focused especially to risks posed to that school.

Under a worst-case scenario of pressure and weather conditions, the analysis concludes that there would be a “jet fire” spreading up to 1,100 feet downwind of the leak, igniting immediately, and causing “serious burns” to anyone in that area. Ignition sources may include cell phones, doorbells, light switches and vehicles.

A leak under those conditions would produce a flammable vapor cloud that would take three minutes to spread up to 1,800 feet away, and burn anyone within 700 feet of the leak, the report said.

It also considers what would happen if the pipeline was operating at about half the pressure of the first scenario, and concludes that there would be immediate ignition of vapor within 825 feet, and a flammable vapor cloud within 1,350 feet of the leak.

A leak would also pose an asphyxiation risk but that would be much smaller than the burn hazard, the report said.

The analysis was conducted by Quest Consultants, an Oklahoma-based firm that assesses the risks of hazardous materials such as those that are due to be carried by Mariner East 2 starting in the third quarter of this year.

Quest is also due to do a risk analysis for Middletown Township, which ordered its own study after agreeing last September to allow Sunoco to build the pipeline on four parcels of public land. The township planned to fund the study with money paid by Sunoco for easements necessary for the pipeline.

Members of the Middletown coalition say they have recently been excluded from the Township’s risk study, and so decided to commission a separate one – albeit by the same company – because it was unclear when or if the township’s version would be done.

“At the time the MCCS study was commissioned, Coalition members were no longer involved in the township’s risk assessment and it was unclear when the Middletown study would be completed, or whether the full final results would be made public,” said Eric Friedman, a Delaware County resident who is part of the Middletown coalition.

Friedman said the coalition was determined that the report it commissioned from Quest should be “independent, factual and unbiased.” He declined to say how much the study cost, but said anyone who contributed was not permitted to have any contact with the consultant.

Separately, the coalition studied the likelihood of a leak occurring, using data from the federal government and Sunoco’s own record of leaks over the last 10 years. Using methodology from an engineering professor at Western University, it concluded that the statistical leak frequency over a 300-mile pipeline is once every 7.5 months.

For the 22 miles of pipeline that are proposed for Delaware and Chester Counties, the projected leak rate is also for one every 7.5 months, the report said.

Jeff Shields, a spokesman for Sunoco, said the leak-probability projection should be considered separately from the Quest risk analysis “because they are clearly separate in authorship, independence and expertise.”

Shields said the catastrophic failure described by Quest is extremely rare. “It cannot be suggested responsibly that whatever rate this group has come up with applies to that type of rupture,” he said.

On Sunoco’s leak record, Shields said the company reports every release of five gallons or more. Most leaks are “small”, more than 70 percent happen within the company’s facilities, and almost all are contained within those facilities, he said.

He said company officials are looking at the Quest and Middletown reports and may respond later in greater detail. The company began construction in February after receiving its final environmental permits from the state.

In 2015, an independent report for the Pipeline Safety Coalition concluded that plans to build Mariner East 2 in neighboring Chester County would subject homes, schools and businesses to the risk of explosion and asphyxiation if there was a leak.

It said that some 5,000 homes, 12 schools, and numerous businesses could be reached by an escaping vapor cloud during the first 10 minutes of a leak.

In the latest report, the Middletown group said the data shows that public officials have a responsibility to find ways of reducing the risk of pipelines such as Mariner East 2.

“In terms of consequences and probability, Sunoco’s proposed ME2 pipeline poses a critical and enduring public safety risk to our region,” the group said in a statement. “Now that this risk has been objectively identified, prudent public policy requires that this risk must be mitigated before it causes unprecedented catastrophe.”

An official at the Delaware County emergency management office did not return a phone call seeking comment.