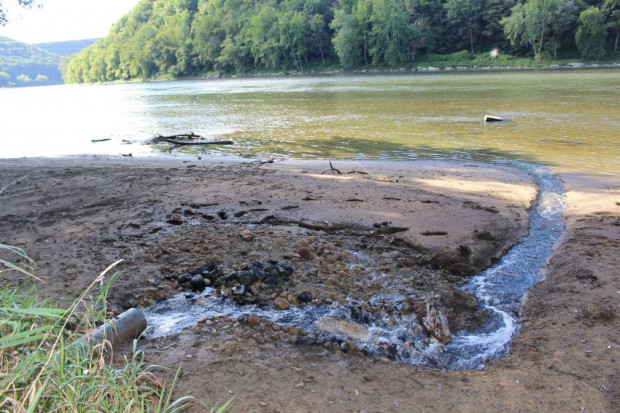 Treatment plants that handle conventional oil and gas waste water are causing a buildup of radioactive materials at the bottom of three Western Pennsylvania waterways, according to a new study from researchers at Duke.

“We concluded that recent disposal of treated conventional (oil and gas waste) is the source of high (radium concentrations) in stream sediments at (waste) facility disposal sites,” the authors wrote.

The study found high levels of radium, a naturally occurring, radioactive material, in river and stream sediment at levels up to 650 times those found upstream of three industrial waste treatment plants that handle fluid produced by conventional oil and gas wells.

“I don’t see it as a life-threatening risk, but it’s one of those chronic effect that over the long term it will have a toll on the environment,” said Avner Vengosh, one of the study’s authors. “What is the toll? We can only speculate.”

In 2011, Pennsylvania asked treatment plants not to handle waste water from Marcellus shale producers, and in 2016, the EPA banned the process.

“What you have coming up to the surface is a mix of water and gas, and sometimes oil,” said Paul Ziemkiewicz, director of the West Virginia Water Research Institute at West Virginia University.

Ziemkiewicz says even conventional waste water can be high in radium, so he’s not surprised at the study’s result.

“When we’ve compared conventional and unconventional brines, chemically they’re almost identical,” he said. “It would be surprising to me if radium didn’t show up.”

Ziemkiewicz says drinking water facilities must remove radium from drinking water; the most obvious concern he has would be for the accumulation of radium in the food chain, and eventually, fish.

Brian Stewart, associate professor of geology and environmental science at the University of Pittsburgh, said the study shows that waste from the Marcellus shale and hydraulic fracturing isn’t the only problematic oil and gas waste water.

“There’s so much concern raised about fracking fluids,” Stewart said. “What this study highlights is we’ve been extracting these other fluids since mid-1800s, and they’re also potentially problematic too.”

Kevin Moody, general counsel of the Pennsylvania Independent Oil and Gas Association, which represents companies involved in conventional oil and gas production, said his group had not reviewed the study and could not comment.

Radium is often associated with rock layers that are rich in oil and gas, and can be found in high concentrations in the waste water that is produced with it. According to the federal Environmental Protection Agency, long term exposure to radium increases risk of lymphoma, bone cancer, and leukemia.

Why is Fracking Wastewater Radioactive? from The Allegheny Front on Vimeo.

The team studied streams at three locations: Allegheny River in Franklin, Venango County, and Blacklick Creek in Josephine and McKee Run in Creekside, both in Indiana County. The authors looked at the relative rate of decay of the radium they found in the stream bed to determine how long it had been in the river.

DEP spokesman Neil Shader said he had not seen the study and could not comment.

The study appears in the journal Environmental Science & Technology, and was funded by the National Science Foundation and the Park Foundation.

This story has been updated to clarify the type of waste produced from conventional wells.

A surge, then a fade for Pennsylvania's wind industry