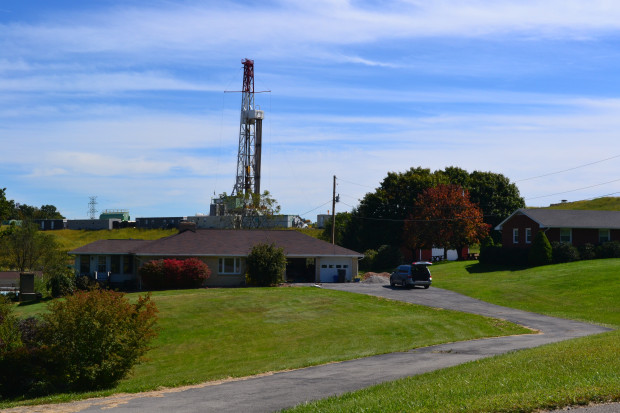 A natural gas well behind a house in southwestern Pennsylvania.

A group of residents in Westmoreland County hopes a judge will halt expansion of gas drilling in their township, and will throw out a zoning ordinance that allows drilling in most of the community.

Protect PT’s lawsuit against Penn Township’s Zoning Hearing Board is scheduled for county court in January. For now, a judge has issued a partial injunction against a drilling company. Apex Energy is allowed to build a well pad in the township, but can’t drill or frack for natural gas on it while the case works its way through the courts.

It’s the latest in a series of fracking-related battles in which a 1970s-era environmental rights constitutional amendment is playing a central role.

In 2013, a plurality of Supreme Court justices used Pennsylvania’s Environmental Rights Amendment, which declared a right to “clean air” and “pure water”, when it decided that municipalities could restrict drilling through zoning. That case is known as Robinson vs. Commonwealth of Pa.

In June, the Court again relied on the amendment, deciding in favor of an environmental group suing the state over use of drilling fees.

In the case of Penn Township, a suburb of Pittsburgh 20 miles east of the city, Protect PT argues that the township’s zoning ordinance violates their members’ environmental rights by creating a “mineral extraction overlay” — a district that encompasses 60 percent of the township. Inside that district, drilling is allowed, as long as the company meets certain criteria. Gillian Graber, Executive Director of Protect PT, said the overlay would allow fracking for natural gas in areas that are more suitable to agriculture, recreation, and low density housing–“close to homes, close to kids.” 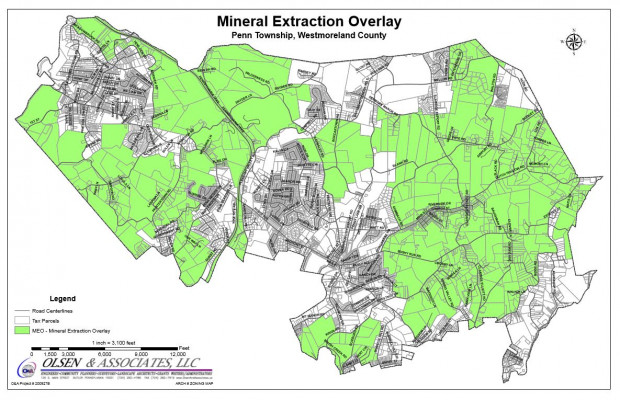 Penn Township's Mineral Extraction Overlay district allows drilling on much of the township.

“We’re not saying don’t frack in Penn Township or ban fracking. We never took that position. We disagreed with where [the drilling companies] put it. It’s an industrial use and it belongs to an industrial area,” Graber says. “We feel it’s unconstitutional. We have a right to clean air and pure water under the Pennsylvania Constitution.”

The group includes 166 households, Graber says, and is getting financial help for its legal case from the environmental group PennFuture. Its appeal is based in part on the state’s Environmental Rights Amendment, Article I, Section 27 of the Pennsylvania Constitution, which states:

“The people have a right to clean air, pure water, and to the preservation of the natural, scenic, historic and esthetic values of the environment. Pennsylvania’s public natural resources are the common property of all the people, including generations yet to come. As trustee of these resources, the Commonwealth shall conserve and maintain them for the benefit of all the people.”

Voters approved it in a 1971 referendum by a 4-to-1 ratio, but it was largely ignored by courts, legal experts say, until the Robinson decision in 2013. In Robinson, three judges used it as the basis to strike down a state law that took away local municipalities’ ability to regulate where and when companies can drill within their borders.

That means the “right to clean air” and “pure water” will be prominent in legal battles over fracking, says John Dernbach, Professor of Environmental Law at Widener University. “Lawyers and judges are now looking at the text of section 27 with greater seriousness than ever before,” says Dernbach.

Penn Township created its mineral extraction overlay in an ordinance finalized in August, 2016. The township has also sparred with drilling companies seeking to operate inside its borders. In April, 2016, Penn Township’s zoning hearing board denied Apex Energy’s application to drill in three locations.

Apex then sued the township for $300 million in damages, claiming that the hearing board had overstepped its authority.

The township settled with the company in December 2016, agreeing to the drilling permits at seven total well pads. In exchange, Apex Energy agreed to various provisions, like air and sound monitoring. Those drilling permits are now on hold, as a judge sorts through the legal case brought by the local residents.

In the meantime, Protect PT is challenging drilling permits sought by another driller, Huntley & Huntley. That company, in its legal briefs, argues that what Protect PT is trying do is “blatantly unconstitutional.”

“If successful, Protect PT will have invented a new concept in land use law that permits it to unilaterally close a municipality’s doors to new development and to plant a flag of conquest on another individual’s private property and the inherent rights thereto.”