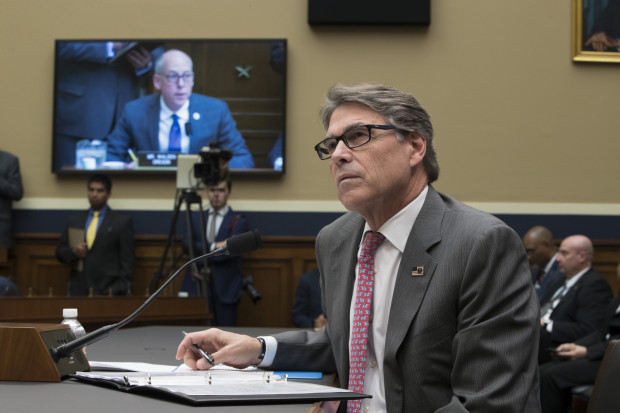 Secretary of Energy Rick Perry continues to defend his plan to have ratepayers subsidize coal and nuclear production in the face of greater competition from cheap natural gas and growing renewables. Perry took his message to the Chamber of Commerce of Greater Philadelphia Friday morning. He left quickly, without taking audience questions.

Perry’s pitch followed a panel discussion hosted by the Chamber, which focused primarily on how natural gas has created new opportunities for businesses seeking cheaper sources of power, and the need for expanded pipeline infrastructure to transport gas. The Chamber has pushed for expanded natural gas development, setting up the “energy action taskforce” with the aim of turning Philadelphia into the “energy hub” of the East Coast.

As Perry stumped for his plan to subsidize coal and nuclear to area business people, some audience members shook their heads, while others clearly laughed.

“The idea that there is a free market in the electric business, the power business, is a fallacy,” he told StateImpact after the event.

In a surprise move last month, Perry issued an order to the Federal Energy Regulatory Commission, proposing the subsidies for coal and nuclear power, and giving FERC 60 days to take action, or take immediate action with public comments to come later.

Perry says it’s the role of government to intervene in the free market. He said electric reliability is at stake. And he compared the proposed ratepayer subsidies to the taxpayer supported military.

Perry said the subsidies may not create the most efficient electricity market, but he says residents need power without interruption and he’s not willing to chance it.

“That’s one of the main roles for government is to regulate and to put into place safeguards so the citizens are well served.”

When asked to respond to criticism that the move was a way to placate the coal industry, which helped elect President Trump who promised to bring back coal jobs, Perry said “there’s always someone wanting to defend their particular part of the pie.”

Although Perry says coal and nuclear are needed to secure electric reliability, a recent study by his own Department of Energy concluded the opposite. The D.O.E’s grid study found that cheap natural gas is what’s driving the coal industry out of business, not subsidies for renewable energy sources. And it did not discount the role of natural gas as a reliable base load power source.

Similarly, the region’s power grid PJM Interconnection, issued a report in March that concluded reliability of electric power supply in the U.S. Northeast and mid-Atlantic states would not be hurt if generators burned more natural gas and renewables or if the recent decline in coal and nuclear generation continues.

Meanwhile, electricity use is dropping, according to the Energy Information Administration, a division of DOE.

New Jersey Congressman Frank Pallone told Perry the administration is “picking winners and losers.” That was the very thing Trump accused the Obama administration of doing with the Clean Power Plan.

“You are distorting the market, damaging the environment, and delivering preferential treatment to favored industries,’’ Pallone said in prepared remarks. “At the end of the day, killing off competitive electricity markets just to save generation assets that are no long economical will lead to higher prices for consumers.’’

Pallone said the threats to electric reliability come from extreme weather events, many of which are caused by climate change.

In the interview Friday with StateImpact, Secretary Perry pushed back on Pallone’s critique, referring the Polar Vortex of 2014, which resulted in a spike in the price of heating fuel in parts of the Northeast.

“I don’t want Congressman Pallone from across the river to have to stand up in front of his costituents and explain to them why we didn’t put in place regulations that allowed for the diversity of this portfolio so that when the next Polar Vortex comes his constituents don’t have to make the hard decision between keeping the lights on and keeping their family warm,” Perry said.

But getting FERC to move forward on the order is not a slam dunk. SNL reported that FERC commissioner Rob Powelson, who recently served as chairman of the Pennsylvania Public Utility Commission, stated he’d quit before implementing a subsidy for coal.

“We will not destroy the marketplace,” said Powelson on Oct. 4 during a speech that drew loud applause and a standing ovation from attendees at the annual meeting of the Organization of PJM States, or OPSI, in Arlington, Va. “Markets have worked well and markets need to continue to work well.”

Powelson was appointed by President Trump along with the new chairman Neil Chatterjee. The third commissioner, Cheryl LaFleur, is an Obama appointee. FERC is an independent agency that does not have to enact the policy proposed by Perry.

“For two decades, PJM Interconnection’s competitive wholesale markets have ensured reliable power supplies at the lowest reasonable cost across a region comprising both traditionally regulated and unbundled states. The pricing and fuel security objectives identified by the Department of Energy are best achieved through competitive markets in order to retain disciplining forces that work to prevent consumers from paying for unnecessary and inefficient resources.”