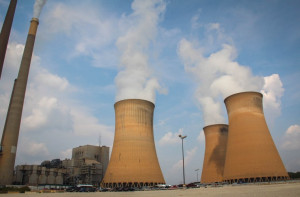 The decision could impact what kind of sources Pennsylvania uses to make electricity for decades to come.

The Clean Power Plan was the Obama EPA’s attempt to lower the electric sector’s greenhouse gas emissions like carbon dioxide (CO2), by an estimated 32 percent of 2005 levels by 2030. Power generation accounts for about a third of U.S. emissions of carbon dioxide, which scientists say is the leading cause of global warming.

The plan gave states specific targets for reducing CO2. Pennsylvania’s target was a 33 percent reduction in emissions by the year 2030.

Former Pennsylvania Department of Environmental Protection secretary John Quigley said the state was on the way to meeting the preliminary goals set under the plan, because it’s using more natural gas, and less coal. But he says revoking the Clean Power Plan could set the state back in ramping up renewable energy like wind and solar.

“Certainly in the early years (of the plan), Pennsylvania would have no trouble complying because of market shifts from coal to natural gas,” Quigley said. “Where it would have required some policy intervention in Pennsylvania was toward the end of the compliance period, to get to the 33 percent reduction. Pennsylvania will certainly have higher emissions than it would have at end of compliance”

Quigley, now the Director of the Center for Environment, Energy and Economy at Harrisburg University of Science and Technology, said it would also result in increased soot and other public health hazards for Pennsylvania. But he said this would also hurt the state’s economy.

“It will cause Pennsylvania in my view to miss out on a lot of economic growth by not advancing more aggressive policies around renewable energy,” Quigley said.  Around the country, there are twice as many jobs in solar as there are in coal.

Pruitt said in announcing the decision that the rule, enacted by the EPA in 2015, “was about picking winners and losers. The past administration was unapologetic, they were using every bit of power, every bit authority to use the EPA to pick winners and losers on how we pick electricity in this country. And that is wrong.”

The decision is expected to help coal, an industry that has struggled mightily as a result of the rise of natural gas.

Coal production reached a 30-year low in 2015, and the number of U.S. coal miners fell from 90,000 in 2012 to 50,000 in 2016, according to the Bureau of Labor Statistics. Pennsylvania is the fourth biggest coal producer in the country, but there were only 6,400 coal miners in Pennsylvania in 2015, down from 8,400 in 2011, according to the state’s Department of Labor & Industry. The coal industry says the total impact of those jobs is more like 30,000, because of the jobs needed to supply and service coal mines.

The state’s largest coal industry trade group praised the announcement, saying it would protect coal jobs in the state.

“The repeal of the Clean Power Plan means that this costly directive, which was particularly discriminatory against Pennsylvania as one of the top producers of affordable baseload generation, will no longer threaten our economy, the jobs of over 30,000 hard working men and women, and grid reliability and resiliency,” said Rachel Gleason, executive director of the Pennsylvania Coal Alliance, in an emailed statement.

Once the EPA submits its proposal, it must go through a lengthy public comment period before the plan can be revoked, and the agency will likely file its own, more modest replacement.

The Marcellus Shale Coalition didn’t specifically endorse or criticize the EPA’s decision to begin pulling back the Clean Power Plan. Under the plan, gas would have been the leading source of electricity in the U.S.

“Pennsylvania is well-positioned to continue to safely produce abundant supplies of clean-burning American natural gas, which are powering our economy, creating jobs, especially for our manufacturing sector, and leading to sharp environmental improvements,” offered David Spigelmyer, president of the trade group, in an email.

Environmental groups of every stripe, though, railed against the decision.

In a written statement, the Clean Power PA Coalition called on Gov. Wolf and other Pennsylvania politicians to “intensify their efforts to make Pennsylvania a leader in the rapidly expanding clean energy economy by advancing policies that combat climate change.” These include joining the U.S. Climate Alliance, a coalition committed to keeping the U.S. to its emissions reductions goals promised by the Paris Climate Agreement.

Neil Shader, a spokesman for the Pennsylvania Department of Environmental Protection said the department would review the EPA proposal. Nonetheless, he said Gov. Wolf disagreed with Pruitt’s decision.

“Governor Wolf and DEP are disappointed in the President’s decision,” Shader said, in a statement. “It ignores science and the country’s global leadership to address climate change. Pennsylvania has made real progress in reducing carbon emissions and DEP will continue to work to find ways to reduce PA’s carbon footprint while ensuring the state remains a net energy exporter.”

Philadelphia works to bring solar energy costs down to earth