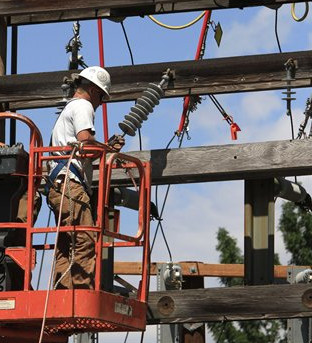 Grid operator says reliability of electric supply to facilities like this sub-station in Vermont would not be hurt by an expected increase in use of natural gas by generators.

The reliability of electric power supply in the U.S. northeast and mid-Atlantic states would not be hurt if generators burned more natural gas and renewables or if the recent decline in coal and nuclear generation continues, the operator of the nation’s biggest electric grid said on Thursday.

PJM Interconnection, which operates the grid serving some 65 million people in 13 states, released a study on the impact of declining coal and nuclear power markets to electric reliability.

It concluded that the expected mix of fuels, including coal, natural gas and renewables, that generators are expected to use at least until 2021 will result in high reliability.

Some measures of reliability may drop with a projected future decline in the use of coal and nuclear but would not be hurt even if natural gas use surged as high as 86 percent of a generator’s portfolio, according to the report, titled “PJM’s Evolving Resource Mix and System Reliability.”

While the lack of diversity shown by a heavy reliance on natural gas would not hurt reliability, it could hurt resilience, or the system’s ability to withstand adverse events like big storms, the report said.

It found there were limits to the amount of wind and solar that can be used for reliable generation. “Significant” increases in the use of those two renewables would hurt reliability but generators could still use “unprecedented” amounts of the fuels as long as the rest of their mix came from reliable sources, the report said.

“The study concluded that our current portfolio is both reliable and diverse,” said Michael Bryson, vice president of operations, who led the study.

The coal industry has been defended by President Donald Trump with his recent action to cancel the Clean Power Plan, which was aimed at cutting emissions from power plants. Coal contributed 33 percent of PJM’s installed capacity in 2016, equal to natural gas, the report said.

With the increasing share taken by natural gas, thanks to low prices and abundant supply from reserves like the Marcellus Shale, PJM said it would continue to watch the growing dependence on the fuel.

“Although each resource type carries with it sizable exposure to low-probability, high-impact events, the ever-growing increase of natural gas as a fuel source makes continued examination of dependence on natural gas particularly appropriate,” it said.

John Quigley, Pennsylvania’s former Department of Environmental Protection secretary, said the report refutes the coal industry’s claim that power reliability will be hurt if coal plants close, and it undermines the case for subsidies to the nuclear industry as that becomes uneconomic in the face of continuing low natural gas prices.

Although the report identifies limits to the use of renewables, “we are nowhere near them yet,” Quigley said, showing that there is plenty of room for their growth in the PJM mix.

Given the speed with which natural gas plants can raise or lower output, natural gas is a compliment to the variable performance of wind and solar, said Quigley, now a senior fellow at the University of Pennsylvania’s Kleinman Center for Energy Policy. “The growth of gas-fired generation is actually good for renewables’ long-term growth potential when viewed from a reliability lens.”

PJM said it undertook the study in response to concern from its stakeholders about whether the grid was losing too many resources that have traditionally been viewed as providing base-load capacity, and whether its reliability was being hurt by an increasing reliance on natural gas.

“PJM needs to work with stakeholders and the industry to determine whether markets and operation structures need to shift to make sure that necessary levels of generator reliability characteristics are maintained in future resource mixes,” Ott said in a statement.